So very challenging keeping up with events at COP26. But let me focus on where I am right now: in a giant plenary room watching Vice President Al Gore speak. I want his slides–they’re awesome! The election in which George W. Bush eventually was declared the winner over Gore was 21 years ago. “An inconvenient truth” was 15 years ago. Would the world be different if Gore had become president? Would it be different if the US had heeded Gore’s message? I don’t know, but I think so. Gore detailed some of the climate shocks of the past several years: Haiti, India, Hurricane Eta and Iota in Central America, Tornados and 17″ of rain in Tennessee USA, and on and on. He also cited the heat dome in the Pacific Northwest US and British Columbia. I was actually there for that shocking event. 4 days in a row of record breaking temperatures, with a high of 116.1 deg F. About 200 people died as a result in Oregon and Washington. An estimated one billion marine animals (from clams to mammals) died. (My wife, Sarah Sloane, did her part in documenting such impacts, finding that 50% of the nestling clutches in Bushtit — a tiny and very social bird — nests died during the heat dome.)

Here’s a short video of Vice President Gore, every bit as impassioned and angry as he was 15 years ago.

By the way, I want to thank the Ecological Society of America for granting me an invitation (a “badge”) for attending COP26 for one week. Organizations wishing to garner invitations to COPs must have official United Nations observer status, requiring a complicated application process. These organizations then receive and can distribute invitations to their members. While I am “sponsored” by ESA, I don’t speak for the organization. The opinions expressed in my blog are mine alone. Thanks again to ESA for making it possible for me to attend COP26.

Much of the audience in Gore’s presentation knows the story he is telling. But everyone is engaged, I think because we all know that it will take powerful presentations such as his to warn and persuade. Remarkable photos and videos documenting what’s happening around the world. I’d be curious to see whether climate change communicators feel that it’s too much doom and gloom — at least in this part of his presentation.

While I listen, I want to try to convey a thought/feeling that I fear will seem trivial, because many will say, “duh”, and because it’s somewhat simplistic I’ll try anyway. Imagine that governments truly embrace a serious shift from our current climate trajectory, by establishing regulations, investing in solutions, creating funds that will allow less developed countries to transition, etc. A nice thought, right. Here’s a question. Would we then have the capacity to implement such change, not just in terms of low carbon energy, nature-based climate solutions (e.g., better agriculture and forestry, indigenous land management), etc. but also in a way that promotes true global climate justice? 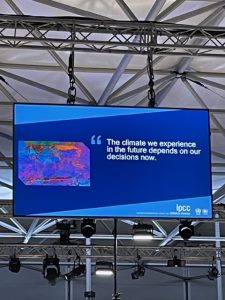 I think so. We have a long way to go, but on display at COP26 are hundreds, thousands of emerging solutions to energy efficiency, low carbon energy generation, and on and on. Equally heartening are efforts at finally valuing what local and indigenous communities have been doing for millennia, listening to youth voices, recognizing the human rights dimensions of climate change, and on and on. Again, we have a very, very long way to go, and much (but not all) of the messaging from developed countries and corporations seems to be more slogan than reality. On view here is only a beginning. I make this argument to emphasize a point. The chief impediment to big progress on climate change is international governmental change.

Wow! Al Gore is searing the World Bank and global development organizations! Huge applause. Gore is arguing that we can’t solve this one country at a time, one problem at a time. By the way, he just told us that Norway just changed its schedule for no more fossil fuel vehicles from 2030 to 2022. He’s talked for more than an hour! The latter part of his presentation focuses on solutions that are already underway and how much these could be amplified by international agreements. I like that he is NOT missing the role of inequality within and among countries on the threat of climate change and how crucial it is to address climate justice in lockstep with climate solutions.