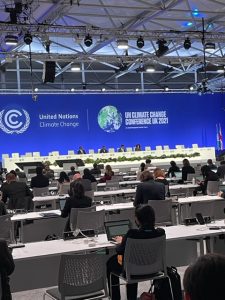 Day 3 was “Finance Day”: how does the world pay for the necessary changes both to reduce emissions (“mitigation”) and to adapt to climate change (“adaptation”). The chief topic across dozens and dozens of venues was how do less developed countries afford transitions and climate shocks.

The photo above is from a session specifically on funding for less developed countries. At a previous COP, more developed countries promised $100 billion for a fund for such progress. The main COP representative from Fiji gave a forceful, eloquent, and straightforward description how this fund has not yet lived up to its promises, both in terms of amount and implementation. He emphasized how vital it was that more development countries live up to their promises…and promptly. He stated that every typhoon is an economic setback in Fiji. Here is a video of  just a few of his comments.

Again, a common theme on day 3 was the need for massive funding to less developed countries for specific mechanisms for making the transition to a new energy system and a climate system. At the country and non-governmental organization pavilion, there were many forums working toward such solutions–not just talking about it, but developing plans. Some hope there. I expect to hear a formal announcement at some point on actual delivery on the $100 billion promise. 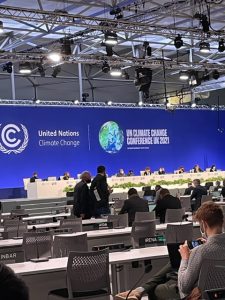 This is a long session, with lots of information, most of which can be accessed in the report (IPCC Sixth Assessment Report 1). Here are a few points that jump out at me…maybe I should say, that kind of knock me off my feet. But, first, here’s the IPCC co-chair, who is very clearly summarizing the update. 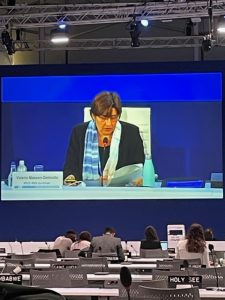 (1) The science of climate change has made amazing progress since the last report in 2013! We know so much more about how the climate has changed and how it is likely to change under different socioeconomic scenarios (i.e., the extent to which we reduce emissions). Here are a couple things that we know a lot more about.

(2) What is called “attribution” climate science has come a long way. It used to be that when some giant climate event occurred, such as a major heat wave killing many people, scientists would have to waffle, stating that, “although we can’t be sure whether climate change is responsible, we know that it increases the probability of such events.” No more! The science has advanced to the extent that we can now actually provide probabilities of an event being the result of climate science and even the percentage role of climate change.” This is important because it specifies the impacts and threats of climate change on people and ecosystems.

(3) We now can specify with much more reliability how a certain amount of emissions translates into more warming.

(4) Increased emissions and concentration of atmospheric greenhouse gases cause warming on land and water over relatively short periods of time (years, decades). In contrast, sea level rise from the melting of ice occurs much more slowly because it takes a while and it takes energy to melt the ice. The science has come a long way in understanding he past and future projections. Sea level has risen about 8″ since 1900, faster than in any century over the past 3000 years at least.The likely sea level rise is 1-5 feet by 2100, depending on how much we reduce emissions. If we do nothing, we’ll reach 3-5′, which would inundate major cities across the world. The science has been able to narrow the projections compared to previous reports, so that the much higher (and lower) possible projections from the past are now seen as unlikely. Important to note, however, that the report does present the low likelihood scenario of 7 feet by 2100!

(5) One other shocking finding is that sea levels will continue to rise because of our activities for centuries and millennia, eventually (over 1000-10,000 years) rising so much that it will wipe out most coastal human communities. Read that previous sentence again! Here’s a key take home point about this. This is a call to arms to slow warming so that we give future generations more time to adapt to such large sea level rise. What we do now and over the next several decades will have huge impacts on the future. 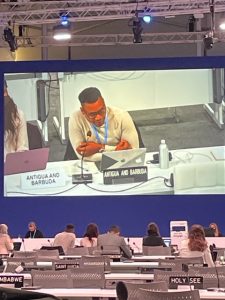 Questions from countries and non-governmental organizations have been very interesting. I can’t report them all, but the rep from India questioned how helpful it is to present low-likely worst-case scenarios, given that we’re trying to create hope and action. Island nations have been very vocal and eloquent in asking for clarification for better understanding their predicament. We heard from Antigua a few mins ago. Photo of Antigua and Barbados rep below.

Coming up next is how a summary of how much we need to limit emissions to achieve better outcomes. I’ll be back later with more on that.