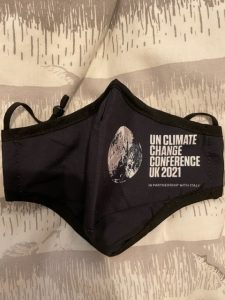 Maybe one day, my great grandchildren will see this and exclaim, “wow! COVID and COP26”

Yesterday was the first full day of COP26 in Glasgow. Scary statistics about a hotter and increasingly precarious Earth, but also hope and excitement.

I came looking for reasons to be hopeful and found it pretty quickly. First, I passed by several demonstrations by people longing for change. 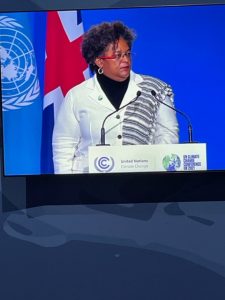 And then inside, I watched, on a giant screen in the “action center,” a searing speech from this world leader (I can’t find her name or from which country she comes — help me here, if you know), punctuated by wild cheering.What was it like inside COP26? There are two main zones. (1) The blue zone, which requires a “badge” that you had to apply for long before the conference. In the blue zone are held the formal negotiations and exhibitions, discussions, press conferences, and more. Many countries and non-governmental organizations (NGOs), such as environmental groups have fascinating exhibits in this zone. (2) The green zone, where anyone can go, which is the forum for all kinds of protests, music, protests, and much more. That’s where I’m going today. I’ll report on that zone another time.

There are three main areas in the blue zone: (1) the exhibition center building, called the “action space,” for interviews, broadcasting events, TV programs, and general networking; (2) the side events pavilion (counties and NGOs, which feature many panel discussions and press conferences…and free espresso!), and (3) the deliberations area (off limits to almost all “observers,” like me, the first two days. Still looking for my special invitation to that, but nothing so far. 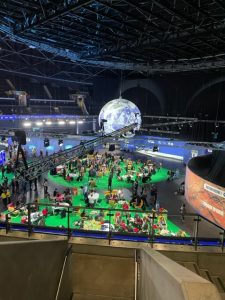 I learned quickly to be prepared for three things. First, being overwhelmed: the size of the forum, the number of events, and the cacophony are impressive. Second, one might be interviewed at anytime, which happened to me despite my insignificance. Third, you need to be prepared to say funny things or listen to funny things when you meet famous people. The Archbishop of Canterbury was next me in the food line. He ordered the venison sausage roll. Not kidding. I appreciate that the Archbishop was out in public, mingling with everyone, having his photo taken with many people, and speaking with everyone and anyone avidly about why change is so important. Other world leaders were pretty much sequestered in their negotiations, accessible the first two days to only a select audience — mainly I think for security and COVID reasons. By the way, every person who enters the Blue Zone must take and register online a lateral flow (antigen) COVID test.

The fiery introduction I witnessed when I first approach and entered the COP26 grounds. My goodness, a heating planet requires a fiery response, doesn’t it!

Day One in Glasgow

Second, the in person Q&A session on the scientific report by the IPCC. First, each country representative had a chance to ask questions or make comments. Some very probing and illuminating Q&As. Island nations, of course, wanted to know more about the degree to which progress would actually slow sea level rise. Good updates on methane and how important controlling methane release is, which was well-timed given Biden’s announcement of US measures to control this. A wonderfully pointed question/comment from the rep from India about the importance of including past emissions in calculations of fair share of future emissions by each country — a coded and important commentary about countries like the US having already used up the lion’s share of acceptable emissions.

Third, meeting people from all over the world committed to change. Dinner with folks from Sri Lanka, Denmark, and Mexico. Aurora Uribe Camalich is a college student from Mexico City, who is part of her country’s official negotiating party. She said that this is the first year the Mexican government has included young people on their team. 4 this year, all women.

I’ll leave you with the photo below, from an artist’s exhibit in the pavilion. 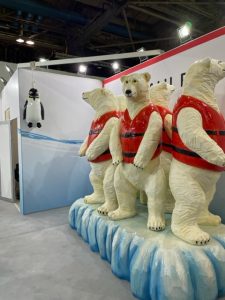