Silverswords may be gone with the wind – shifts in trade winds, that is

Silversword plants of Hawai’i are unique to the Maui’s Haleakalā volcano summit area and to the Mauna Kea and Mauna Loa volcanoes on the Big Island. Each volcanic mountain has its own unique type of silversword. The Haleakalā species – known by its Hawai’ian name ‘āhinahina which translates to very grey – is highly threatened and is considered by many to be the most beautiful. But they are growing rarer due to drought, especially at lower elevations on the volcano slopes. 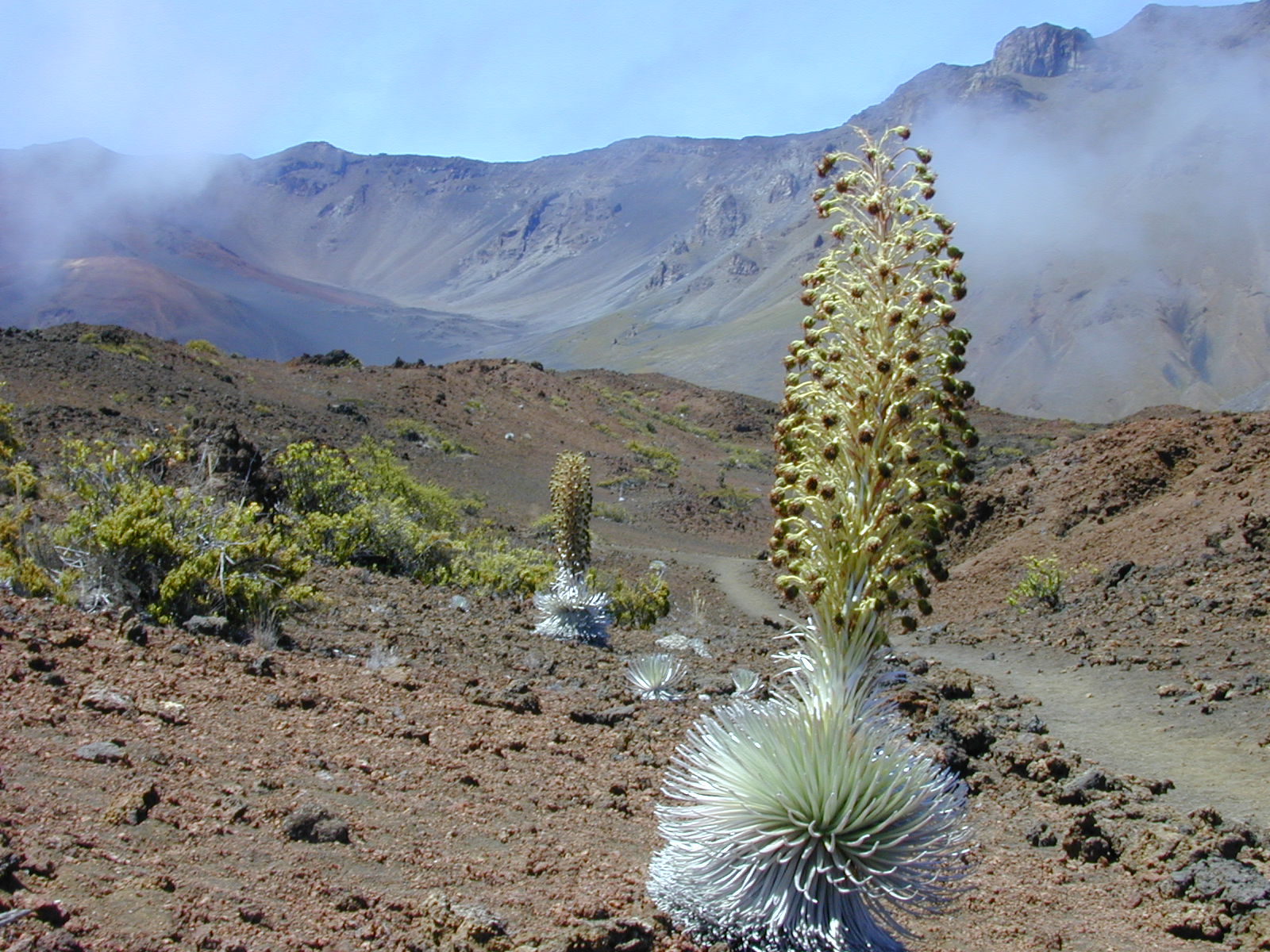 In a new study in the Ecological Society of America’s journal Ecological Monographs, researchers seek to understand recent population declines of Haleakalā silverswords and identify conservation strategies for the future. 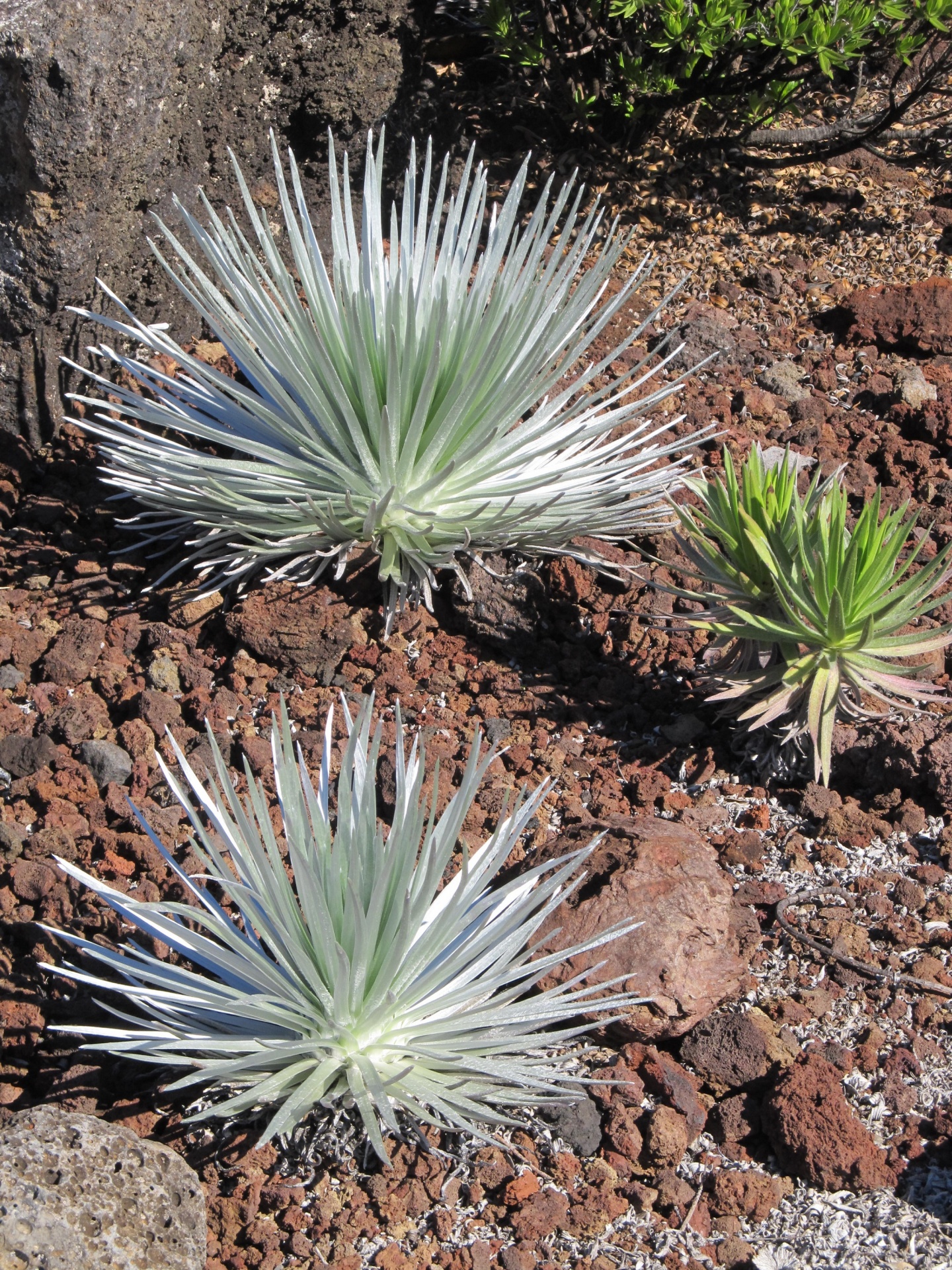 Because silverswords grow at high elevations between 5,000 and 10,000 feet, they have thoroughly adapted to the harsh environment there. These plants, with very dense rosettes of spiky leaves that radiate out from the base, produce towering blooms that can reach up to six feet high. The plants live from 15 to more than 50 years, but they bloom only once and die. Climate change imposes a new threat to these charismatic plants: hotter and drier conditions threaten even hardy silverswords.

Researchers with the University of Hawai’i are actively working with Haleakalā National Park staff to evaluate the effects of drought conditions on silverswords and to preserve these unique plants for generations to come.

Paul Krushelnycky, a researcher with the University of Hawai’i, and colleagues tracked growth of silversword plants for over three and a half years in greenhouse and out-planting experiments at the bottom, middle, and top of the plant’s elevation range on Haleakalā. They studied the adaptability of silverswords to environmental or climatic changes and they also studied the plants’ genes to see if some plants have genes that help them withstand drought better than others.

In the experiments, researchers found a counter-intuitive result, but one that is in line with what has been seen in the wild. “Plants have been dying at greater rates in wetter portions of the range, in response to drying conditions, rather than in drier areas,” says Krushelnycky. “It’s contrary to the prediction that one would normally make – namely, that the population should shift towards wetter areas as conditions get drier.” 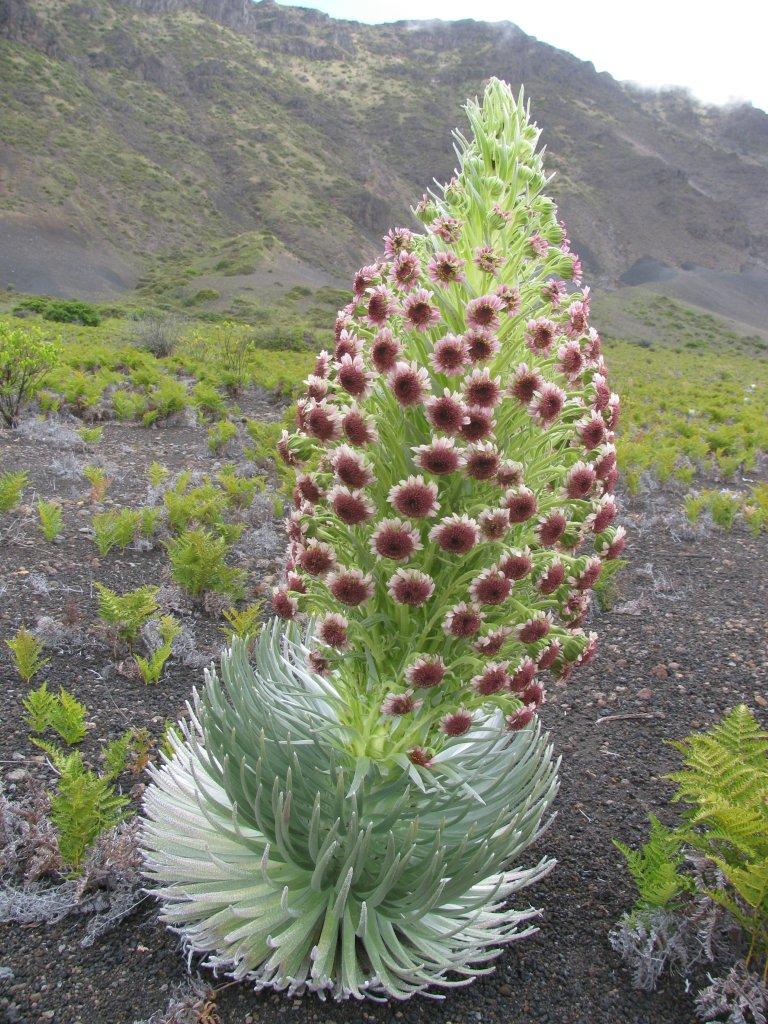 A silversword in Haleakalā in peak bloom. Photo courtesy of Forest and Kim Starr / CC BY 2.0.

One such change, and an extremely important factor for Hawai’i volcano climate overall, is the frequency and elevation of the trade wind inversion (TWI). “It’s the trade wind inversion, not the trade winds per se, that is important in creating the relevant ecotone high on the mountain,” explains Krushelnycky. “Above the TWI, it’s much drier and clearer most of the time, and this appears to be important in determining not just the lower boundary of silverswords, but also the boundaries of several plant communities on the mountain.”

An inversion is a layer in the atmosphere in which temperature increases, not decreases, with height, creating a kind of ‘cap’ of warm air. In Hawai’i this commonly occurs at about 6,000 to 8,000 feet. The presence of the TWI influences many aspects of Hawai’ian climate, including limiting cloud height, limiting the amount of rainfall on the islands, and producing dry air and clear skies at the highest elevations on volcanoes. Because the TWI limits how far air can rise, it plays a big part in how strong convective clouds and showers can become – a lower TWI elevation leads to lighter rainshowers or clouds with no showers at all.

The top of inversion-layer clouds are seen from above here at Haleakalā National Park. Conditions above the layer are clearer and drier more consistently than below. Photo courtesy of Forest and Kim Starr / CC BY 2.0.

The occurrence of the TWI has increased in recent decades, which leads to more persistent clear and dry – and thus stressful – conditions high on Haleakalā. Kryschelnycky says some climate projections predict TWIs will be even more frequent in the future, and possibly at lower elevation. Both of these changes would lead to more of the silversword range being exposed to stressful conditions. All in all, the changing climate would jeopardize the plants’ survival even more.

The delicate silverswords, once ripped up and taken home by visitors as souvenirs before the creation of Haleakalā National Park, now depend on management efforts for survival. Park staff fence out predators, destroy non-native plants that would crowd out silverswords, and educate park visitors to stay on trails to avoid stepping on fragile silversword seedlings and root systems. As for future management, Krushelnycky believes efforts should focus on using suitable places for silverswords to live in the face of climate changes, rather than trying to find or breed the silverswords with particularly drought-resistant genes.

“The study highlights how plant population responses to changing climate can be quite complex,” says Krushelnycky, “both in terms of the underlying mechanisms and the outcomes.” With continued study of silverswords and similarly-affected plants, the researchers think case studies like this will reveal more factors essential for consideration in broader conservation efforts.