Member’s Perspective: Standing Up for Science Funding on Capitol Hill 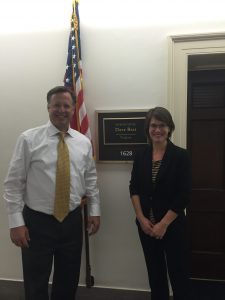 Federally funded scientific research stimulates the economy, improves human health, bolsters national security and builds an educated workforce. In the United States the bulk of this funding comes through agencies like the National Science Foundation (NSF) and the National Institute of Health (NIH); however, since the 1980s, the percentage of US gross domestic product (GDP) allocated to these budgets has declined. This downward trend grew steeper following the 2013 sequester (a direct result of the Budget Control Act of 2011), and threats to the federal funding of scientific research have intensified over the past year and a half. As a graduate student, I could easily choose to live under a rock, content to focus in on my chosen discipline. But, these looming threats to the federal funding of scientific research have propelled science policy to the forefront of my mind.

Recently, I have bcome involved in the intersection between politics and science by joining the March for Science, calling my federal representatives, and speaking with family and friends. High on my list of priorities was direct communication with elected representatives. Why? Because Congress controls the final fiscal budget, or as some cleverly say, Congress “holds the purse strings.”

Our Congress was created to serve its constituents, and focus on their concerns. Constituents bring an astounding variety of concerns to the attention of their representatives every day. If the system works, those who say nothing, get nothing. So, who will argue for federal research funding, if not those with a vested interest in scientific research such as myself? Without action, the continued decline in funding will be as much our responsibility as the policymakers passing the budget. But where do we start? How can we best optimize the time we have with our policymakers to make the greatest impact? How do we even secure a meeting with our elected officials? My story began with an email that arrived in September 2017, subject line: “ESA Communicating Science Training.” 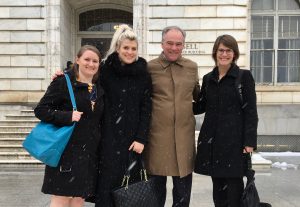 Upon opening the email, I found the description of a workshop designed to provide a crash-course on communicating science, engaging the public and science policy. The workshop was accessible, both in regards to distance (only a two-hour drive each way) and time commitment (1.5 days translated to less time away from the lab). The convenience, combined with the relevant, timely content, made it an easy sell. I quickly applied.

During the workshop, we refined our communication skills and practiced “making an ask” to policymakers in a couple of role-playing sessions. One improv session that stood out to me focused on meeting with a ‘hostile’ office, or, in our case that of a policymaker opposed to federally funded scientific research. Seeing how such a meeting might play out helped me prepare for how I would handle such an interaction. And, indeed, these meetings may be the most important kind to have.

Not long after the workshop, I contacted the offices of my senators and representatives. Unfortunately, my timing coincided with the proposal of the Tax Cuts and Jobs Act of 2017, popularly known as the ‘GOP Tax Bill.’ The offices of my officials were packed. So, I bided my time and kept learning. Building from what I’d gathered from the ESA workshop, I applied to the American Association for the Advancement of Science’s Catalyzing Advocacy in Science and Engineering (AAAS CASE) workshop in DC. I earned a place through my University, and our government relations office helped set up meetings with my officials in the Senate and the House of Representatives.

My meetings could not have been timed more effectively. The week of the omnibus bill (which covered diverse topics from budget caps to border security), I met with my Members of Congress Rep. Dave Brat (R-VA), Senator Tim Kaine (D-VA), and a staff member in the office of Senator Mark Warner (D-VA). Due to the practice obtained through the ESA Science Communication, Public Engagement and Policy Workshop, along with additional information from the AAAS CASE Workshop, I felt well prepared.

As stressed at the ESA workshop, I thoroughly researched each policymaker’s positions before my appointments. I took time to consider what aspect of my research, or research at large, would most interest each based on their ideology, voting history and constituent base. Because my goal, or “ask,” was to convince them to maintain, or increase, funding to agencies such as the NSF and the Department of Energy, both of which fund my research, I asked myself how aspects of my work could meet the goals of each office and went from there. I concentrated on meeting my policymakers where they were ideologically, not where I was (thank you, science communication training!).

My meetings with Senator Tim Kaine and the staff in Senator Warner’s office were close to what ESA told me to expect. Brief, ten-minute conversations, during which I thanked them for their past support, explained why I was asking for continued backing, and offered myself as a resource. I am thankful that we prepped to be flexible, as my meeting with Senator Kaine turned into a walk-and-talk through falling snow.

My final meeting, with Rep. Dave Brat and a member of his staff, lasted considerably longer. Rep. Brat is a member of the Freedom Caucus and the Tea Party Caucus, two groups containing members who have historically not supported NSF and many of whom deny climate change. However, he is also part of the Chesapeake Bay Watershed Caucus dedicated to restoring the health of the Bay, and, with a Ph.D. in Economics and a faculty appointment at Randolph Macon University — an institution nearby my own — he is no stranger to academia. Ahead of time, I predicted that this meeting could either be my most interesting or my most disastrous. In the end, it was closer to the former.

We ended up speaking for more than a half-hour. I began by establishing myself as a constituent, residing in the district for 18 years. Then, I described my role as a graduate student studying forest health and wetland restoration. I explained how excess flooding of coastal military bases due to wetland loss and degradation (upward of 50 percent since colonial times), sea level rise and increased extreme climatic events, negatively impacts troop readiness. This threatens national security (which, no coincidence, also happens to be the first issue listed on Rep. Brat’s website). Research investigating the effectiveness of wetland restoration is paramount to begin mitigating this issue. I also delved into the economics of forest health from tourism and timber industry perspectives, both economic strongholds in Virginia. Whether these early links framed the rest of the meeting, I do not know, but both Representative Brat and his staff member maintained a friendly and open demeanor throughout the remainder of the conversation.

During our meeting, I was challenged on certain topics such as industry versus federal research funding, previously funded NSF projects that sound senseless on the surface (but are not! Check out the Golden Goose Awards), and the link between climate change and increasingly frequent and intense extreme climatic events. The science-interested staffer even asked me about the CO2 fertilization hypothesis (though he did not use that extract phrase when posing the question). At times, I did not know the full answer to certain questions, but, credit to the wise advice bestowed by both ESA and AAAS, I promised to look into the answers and get back to them. Through this experience, I unexpectedly found that they were an audience prepared – even interested — to listen to me, rather than the other way around.

The ESA and AAAS workshops helped me to deliver my message in an accessible, informed manner (as opposed to a flustered or defensive one). My elected officials understood me, and we were able to engage in meaningful dialogue. For those of you interested in meeting with your elected officials, I highly recommend these programs, but for those lacking time to attend either workshop, guidelines on how to meet with policymakers can be found online via ESA and AAAS.