The Cooper Award honors the authors of an outstanding publication in the field of geobotany, physiographic ecology, plant succession or the distribution of plants along environmental gradients.

William S. Cooper was a pioneer of physiographic ecology and geobotany, with a particular interest in the influence of historical factors, such as glaciations and climate history, on the pattern of contemporary plant communities across landforms.

Wiebe Nijland drives an inflatable boat, underway to collect UAV images of islands in the study area of the Cooper Award-winning paper, on British Columbia’s Central Coast. Dr. Nijland is a post-doc working on island biogeography and nutrient subsidies with the University of Victoria and Hakai Institute.Credit: Keith Holmes.

Dr. Trant, an assistant professor at the University of Waterloo, Ontario, and colleagues at the University of Victoria and the Hakai Institute in British Columbia revealed a previously unappreciated historical influence on forest productivity: long-term residence of First Nations people.

Counter to a more familiar story of damage to ecosystems inflicted by people and their intensive use of resources, the activities of indigenous people on the Central Coast of British Columbia enhanced the fertility of the soil around habitation sites, leading to greater productivity of the dominant tree species, the economically and culturally valuable western redcedar (Thuja plicata Donn ex D. Don).

Trisalyn Nelson on the water in Sooke, British Columbia with children Finn and Beatrice Nelson-Walker. Dr. Nelson is director and foundation professor of the School of Geographical Sciences and Urban Planning at Arizona State University. Credit: Ian Walker.

Though the calamity of colonization has greatly reduced their numbers in the last century, First Nations people have repeatedly occupied coastal sites in the study region for 13,000 years. Study sites were last occupied about a century ago. Through millennia of marine harvests, coastal people created shell middens extending over thousands of square meters of forest area. Trant and colleagues sampled middens that extended deeper than 5 meters (16 feet) below the forest floor. The shell piles leveled the ground, improved drainage, and delivered a long, slow-release boost of calcium to what would otherwise be acidic, nutrient poor soils.

Calcium is commonly a limited nutrient in forested ecosystems. Lack of calcium has been proposed as an element in top die-back of western redcedar. Charcoal from human made fires may also have mobilized soil nutrients. The slow dissolution of calcium carbonate from shells and charcoal from fires raised the pH of the soil, releasing inaccessible phosphorus to plants.

Through a combination of airborne remote sensing and on-the-ground field work, the authors showed that forest height, width, canopy cover, and greenness increased on and near shell middens. They presented the first documentation of influence on forest productivity by the daily life activities of traditional human communities.

Duncan McLaren, an assistant professor of Anthropology at the University of Victoria funded by the Hakai Institute, samples lake bottom sediments near Fish Egg Inlet in British Columbia, in April 2016. Diatoms and radiocarbon dates from these sediment samples indicate when the ocean was last high enough to inundate the basin, granting historical insight into sea level change. Credit: Johnny Johnson.

Brian Starzomski, the Ian McTaggart Cowan Professor of Biodiversity Conservation and Ecological Restoration at the University of Victoria, teaches students in course intertidal ecology during a course at the Hakai Institute on British Columbia’s Central Coast in June 2010. 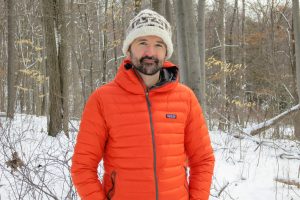