How is a good ecologist to react to the new administration? Letter from ESA President David Lodge 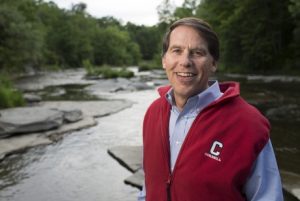 Like many of you, I have found it hard to know how to react to the style, tone, and substance of the new administration in Washington. I have followed a common admonition: wait and see.

I have been hesitant to speak out because so much remains uncertain about what policies the administration will pursue. I don’t want my reactions to get ahead of policy decisions. Indeed, on several topics there have been large reversals between earlier rhetoric and later decisions. For example, contradicting earlier statements, President Trump has recently made clear that US support will continue for NATO and a One China policy. Likewise, statements and executive orders on immigration differ dramatically from one day to the next. It’s hard to react constructively to moving targets.

Unfortunately, the absence of science and scientists in the Trump administration has not changed.  Likewise, Trump’s actions on environmental policy have been consistent with all earlier indications. On multiple occasions, the president has professed his desire for “clean air and clean water,” but in reality, the new administration’s appointments and policy decisions have consistently signaled a frightening disregard for science. The administration has ignored the important role that a healthy environment plays in human welfare and the catalytic effect on economic growth provided by green technology and policies, especially in the energy sector. The lack of a White House science advisor, the confirmation of implacable EPA foe Scott Pruitt as EPA administrator, the executive order beginning the reversal of the Waters of the US rule, the proposed 24% reduction in the EPA budget, the proposed 10% reduction in the Department of Interior budget, and the proposed 17% reduction in the NOAA budget confirm the administration’s dismissive attitude toward science, especially toward sustainability science and environmental protections. We have waited and we have seen.

Although I have not previously spoken out personally as I am here, ESA leadership and staff have quickly addressed some of the administration’s policy actions taken since inauguration day, especially in concert with other scientific societies. Please see, for example, ESA’s letter on scientific integrity and joint letters on the immigration ban, the importance of a president’s science advisor appointment, the Waters of the US rule, and more that are found online.

In addition to these society statements, I describe below how I think about the current political situation with respect to science and the environment. While I recognize that a diversity of views is likely to exist among ESA members, I hope that many of you will find these reflections useful as you consider how to react as individual members of ESA. I also recommend ESA Past-president Jane Lubchenco’s recent commentary on “Environmental science in a post-truth world,” in Frontiers in Ecology and the Environment.

First, what binds ESA members together is our respect for science, commitment to rigorous peer review and publication of research, and a desire to see our science interpreted and used appropriately. We must continue to advocate—more strongly than ever—that representatives of science and rigorous scientific analysis are essential to policy-making. Call, write, and visit your local, state, and national representatives and your senators. Consider participating in or otherwise supporting April’s March for Science.

Second, we must not allow ourselves to be arrogant or make it easy for others to perceive us that way.  Science must be at the policy-making table, but in a democracy, many diverse considerations belong at the decision-making table. We must be more aggressive promoters of science, but we must simultaneously be humble in recognition that our unique role is not solely important. In this context, it is important to remember that only one current member of Congress has a PhD in a scientific discipline. Most members of Congress, for example, are smart and dedicated people, and they deserve our respect while they also need our knowledge. We must acknowledge that policy-makers usually face difficult trade-offs between competing goods, and no doubt, there are counterproductive environmental regulations that cause not only inconvenience but serious harm to the livelihoods of many good people.  There is often not a “right choice,” but a set of appropriate choices considering the complexity of environmental issues. If we fail at empathy, humility, and respect, we make it easier for those who find the overwhelming scientific consensus on climate change threatening to paint science and scientific societies as merely one more self-interested group.

Third, we must seek to understand and engage respectfully with our family members, neighbors, and other fellow citizens at work, on the street, and in community groups who share President Trump’s enthusiasm for reversing environmental regulations. Remember that not all misunderstandings and misrepresentations of science are malicious; there is often simply a very large and important gap of understanding between scientists and members of the public with little background in science. Double-down on your engagement in outreach and education.

Fourth, we must remind our elected officials at all levels and our fellow citizens that the Clean Water Act, Clean Air Act, and the Montreal Protocol have dramatically improved human health and well-being in the last 45 years.  Los Angeles, Gary, IN and New York City were not healthy places to breath and swim in 1970. In Cleveland, the oily pollution floating on the Cuyahoga River caught on fire. Acid rain had wiped out the fish in many Adirondack lakes. Bald eagles and brown pelicans were on the verge of extinction. An ozone hole was growing over Antarctica and increasing skin cancer in humans. Scientific research provided the diagnoses of these problems and informed the solutions. Executive branch and congressional leadership made wise choices in designing these policies. And it worked: the air in US cities is not like that in today’s Beijing and Delhi; rivers no longer burn, and fishing and swimming are possible in many more rivers now; acidification of freshwaters has been reversed; bald eagles and brown pelicans are abundant; and the ozone hole is diminished.

Remind people that these and many other good reasons motivated our parents and grandparents to embrace science and welcome the science-based environmental protections that the current administration is so eager to overturn. Point out that most pollution also increases injustice: then and now, most forms of pollution disproportionately affect those least able to protect themselves. Listen to the concerns about regulation while politely reminding people of the benefits of current policies that may be obvious to you but unknown to them.

Finally, we must alert our fellow citizens that science and technology are already driving economic booms in other countries. Solar and wind energy is now often cost-competitive with electricity generated in fossil fuel-burning power plants. Renewable energy, advanced battery technology development, and other forms of clean energy industry will continue to drive economic growth where policies enable that growth. There is a great risk that by disadvantaging green industries in the US, the new administration will cede even greater economic and manufacturing leadership to China, Germany, and other countries.  Such an outcome would be simultaneously counter to the best interests of the US and counter-productive for global environmental protection.

ESA has seen many US administrations come and go in its 102 years. I’m not naïve or complacent about the damage that may result from this administration’s disregard for science, but I remind young members of ESA that there have been challenges in the past, and that the scientific experience in federal agencies is broad and deep. There can be wisdom in bureaucracy. The staff and leadership of ESA will stay the course for science, speaking with both confidence in the rigor and value of our mission, and with humility as only one important voice in our robust democracy. We have waited, and now it is time for ESA to be seen and be heard. I encourage each member of ESA to do the same.