Ariana Sutton-Grier, an ecosystem ecologist at the University of Maryland, helps lead the National Oceanic and Atmospheric Administration’s Coastal Blue Carbon Team. She shares this Frontiers Focus on the long-term carbon storage capacity of coastal wetlands.

Black mangroves in Jobos Bay, Puerto Rico, reduce carbon dioxide in the atmosphere as well as mitigate the effects of climate change on coasts. These salt-tolerant plants take carbon dioxide from the air in the process of converting sunlight into energy and retain carbon in wood and soil. Their complex root structures anchor soil and debris that are rich in carbon. Tides limit the action of microbes in the soil that might otherwise release stored carbon. Mangroves protect coastal communities from storms and flooding by buffering storm surge, absorbing the impact of waves, and preventing erosion. They also provide important habitat for fish. Credit, Stefanie Simpson.

Recent scientific advances have demonstrated that coastal wetlands — mangrove forests, tidal marshes, and seagrass meadows — pull carbon out of our atmosphere and store it for hundreds to thousands of years in the plants, but more importantly in the soils below. Policy- and decision-makers are investing in this “coastal blue carbon” by utilizing wetland conservation and restoration as a natural climate solution.

The newly-recognized carbon sequestration value of coastal wetlands has sparked interest in the capacity of other coastal and marine ecosystems to provide climate mitigation benefits.  In the February issue of Frontiers, my colleagues and I explore the question of whether or not coral reefs, kelp forests, marine animals, and tiny, but extremely numerous, single-celled phytoplankton store carbon for the long-term. We evaluate their potential for broader climate mitigation strategies.

We conclude that while reefs, kelp forests, phytoplankton, and marine wildlife are all vital to the health and stability of our oceans and human communities, current scientific research suggests that they are not viable climate mitigation opportunities under existing policies and mechanisms. 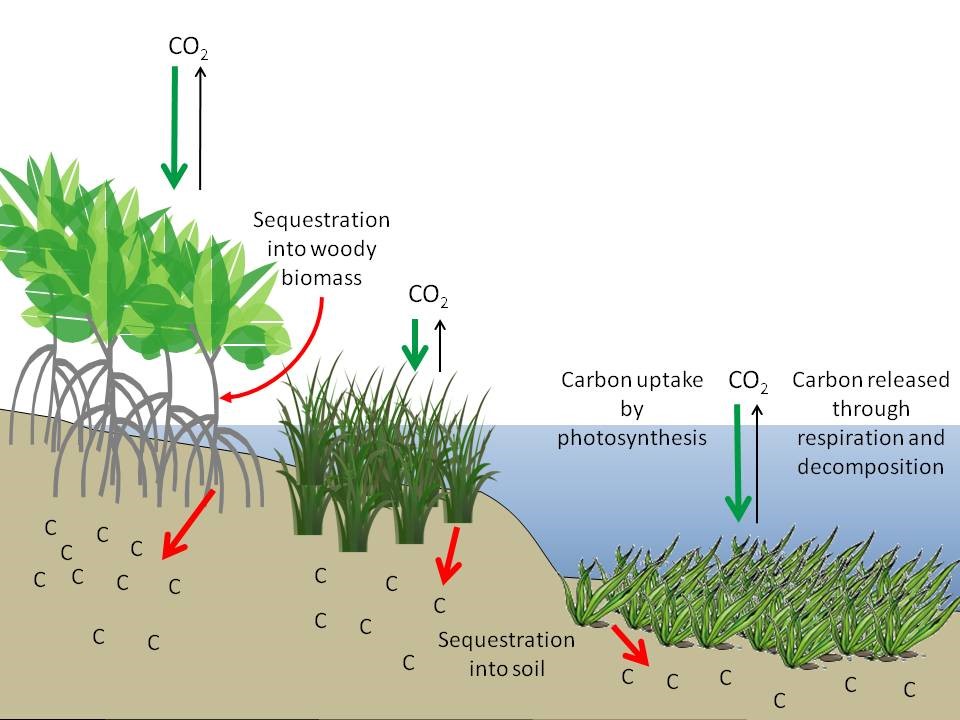 In intact coastal wetlands (from left to right: mangroves, tidal marshes, and seagrasses), carbon is taken up via photosynthesis (purple arrows) where it gets sequestered long term into woody biomass and soil (red dashed arrows) or respired (black arrows). When communities drain the soil in coastal wetlands (ie deforestation and drainage, impounded wetlands for agriculture, dredging) , the carbon stored in the soils is consumed by microorganisms, which respire and release CO2 as a metabolic waste product, faster,, which leads to greater CO2 emissions. From Figure 1 of Howard et al. (2017) Front Ecol Environ 2017; 15(1):42–50.