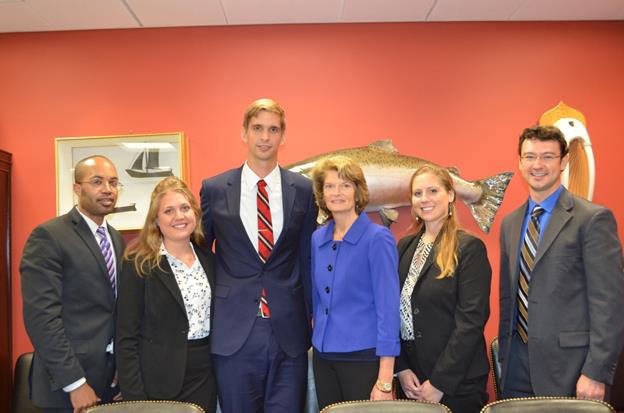 Walking through the door into Senator Lisa Murkowski’s fourth floor office in the Hart Senate Building feels like stepping from the halls of the nation’s capital into a home in Alaska. The walls and shelves are covered in photos of arctic landscapes, Alaska Native artwork, and other mementos of my home state. Indeed, walking around the reception area felt a lot like pacing the living room of my parents’ house back in suburban Anchorage.

There were five of us there on the afternoon of April 28th. We constituted the California and Alaska contingent of the Biological and Ecological Sciences Coalition (BESC) Congressional Visits Day. The event is organized annually to give biologists and ecologists from around the country a chance to interact with Congress on the ever-pressing issue of National Science Foundation (NSF) funding. ESA sponsored my participation through a Graduate Student Policy Award (GSPA), along with Brian Kastl of University of California, Santa Barbara and four other awardees representing different states.

Though we had been expecting to meet with Senator Murkowski’s legislative aide, as we were ushered into a conference room we were pleasantly surprised to learn that the senator herself would be dropping in for the second half of the meeting. Because of a last minute conflict with a vote in the Capitol Building, this meant that Sen. Murkowski would be our only in person meeting with a member of Congress that day.

The goal of BESC’s Congressional Visits Day is twofold. First, we were there to put a human face on NSF funding–too often federally funded research gets caricatured and lambasted by politicians whose mental image of a scientist is likely something along the lines of a Revenge of the Nerds protagonist in a lab coat. Having a collection of business-attired biologists with a polished pitch on how their federally funded research achieves real world impacts leaves a lasting impression. Second, and more concretely, we were there to ask for $8 billion in funding for NSF for fiscal year 2017. If that seems like a lot to you, consider the following three facts: (1) $8 billion is $2.44 billion less than the cost of a single Ford-class aircraft carrier, (2) proposal funding rates at NSF have fallen over the last decade by a third, and (3) the NSF would need an additional $4 billion to fund all proposals deemed meritorious (average review of ‘very good’ or higher).

(l to r) Mychajliw, Kastl, Tirman and Treuer outside the US Capitol

The meeting with Sen. Murkowski’s staff started off in what by that point felt like a familiar routine. We went around our table introducing ourselves, giving a one line explanation of who we are, what institutions we are affiliated with, and what our field of research is (or in the case of our chaperone-extraordinaire, Terence Houston of ESA, what exactly a BESC Congressional Visit Day is). The other Alaskan (Kristina Tirman of the delightfully alliterative Sitka Sound Science Center) and I then had a chance to dive in a little more depth into the NSF-supported projects that we work on. In my case, this meant a couple sentences about my overall dissertation research on the forces shaping forest structure and community composition in regenerating tropical dry forest in Costa Rica (or as I tended to put it that way “I study what plant and animal species show up in different patches of young forest in Costa Rica–a critical question for managing a highly imperiled but incredibly diverse ecosystem”). And then a longer explanation of the part of my dissertation that was awarded an NSF Doctoral Dissertation Improvement Grant (DDIG). That chapter of my thesis focuses on utilizing arrays of microphones to tease out fine scale habitat and inter-species associations of vocalizing species by triangulating the location of individual calling organisms. These microphones are synced by GPS receivers to the nearest millisecond to allow for very precise localization based on the differential time of arrival of animal calls at each mic, allowing the creation of 3-D ‘acoustic maps’ of each patch of forest. A very similar system is actually already being deployed in many large American cities to rapidly notify authorities of the source location of gunfire or other explosions. The practical application of my DDIG supported research is thus more along the lines of generating large datasets that provide useful insights into the management of endangered species, as well as creating a model for cheaper, less invasive, and more accurate mode of monitoring wildlife populations in remote areas (like most of Alaska!).

The meeting itself was a very interesting and memorable experience. Though Sen. Murkowski belongs to the party that is currently aggressively advocating for reduced discretionary federal spending, I would very much describe the senator as a politician who ‘gets it’ with regard to basic science funding. She didn’t need reminding that basic science research is the engine that drives our information and innovation based economy, nor that NSF plays a major role in maintaining a globally and nationally competitive workforce for Alaska and the rest of the nation.

That said, Sen. Murkowski is well known for pushing back, even when she’s on your side. Not long after we made our pitch for $8 billion in funding, she asked us something along the lines of what particular branch of NSF we thought was underfunded. I have to admit the question caught us slightly flat-footed. After a slightly too long silence in which we all quickly made eye contact with one another, I offered up a personal anecdote related to the Graduate Research Fellowship Program. Having been named honorable mention three years in a row, with half of all of my reviews being ‘Excellent’ and all but one of the rest being ‘Very Good’, I have felt firsthand the consequence of an NSF that’s slightly underfunded across the board. This led to a broader discussion of funding levels and proposal success rates through time, which brought us to what I think is one of the most important talking points on this issue–namely, that as science continues to make vitally important strides in drawing in underrepresented groups, there’s going to be increasing difficulty in funding all worthy proposals unless the size of the pie grows proportionally.

Though that point led to a lot of nods around the table, what seemed to resonate the most during that meeting–and indeed, in all of the Alaska offices that day–was a much more pragmatic point. Alaska is currently facing an enormous, once-in-a-generation budgetary crisis. Declining production and the low cost of crude oil have conspired to leave the state budget only a quarter to a third funded for the previous and current fiscal year (that’s a quarter to a third funded–two thirds to three quarters underfunded!), without much prospect of improving in the immediate future. With the state’s university system facing dramatic cuts, maintaining top-notch STEM education and research facilities is going to require the NSF to play a strong role. And Alaska certainly punches above its weight in terms of receiving NSF support–though we rank 48th in population size, we’re in the low to mid-30s for amount of NSF dollars received. And it’s not just direct costs of equipment and researcher salaries that those grants cover; everyone we talked to on the Hill was surprised to learn that each grant comes with a second payment to the host institution for ‘overhead’. That means significant amounts of money to maintain broader university infrastructure, including payroll for administrative assistants and other staff.

At the end of our meeting at Sen. Murkowski’s office, she was kind enough to pose for a photo in front of Walter, a magnificent trophy king salmon she caught on the Kenai River in Southcentral Alaska. I don’t think any of us had to force a smile.

While I’ve focused here largely on a single congressional meeting, it was only a small part of a wonderful experience in DC. Our first night we were honored to represent ESA at the Coalition of National Science Funding reception on Capitol Hill, and day two was dedicated to a deeply inspiring panel discussion on careers in science policy, presentations on the appropriations process and science funding through the years, and finally congressional meetings prep. The experience has certainly helped shape my career plans and given me a set of tools I will continue to draw from in the future. Perhaps the best part of all though, was getting to know an amazing group of exciting young ecologists that made up our GSPA cohort and team AK/CA. I couldn’t be more excited to see this group again at conferences and other settings through the years. Thank you to ESA and BESC!