During their breeding season, five sibling warbler species congregate in the evergreen woods of Vermont and Maine. Similarly small and insect-eating, Cape May (Dendorica tigrina), myrtle (D. coronate), black-throated green (D. virens), blackburnian (D. fusca) and bay-breasted (D. castanea) warblers seem to defy the logical rule that species which exploit the same food and habitat cannot coexist. Why does one warbler species not out-compete the rest? 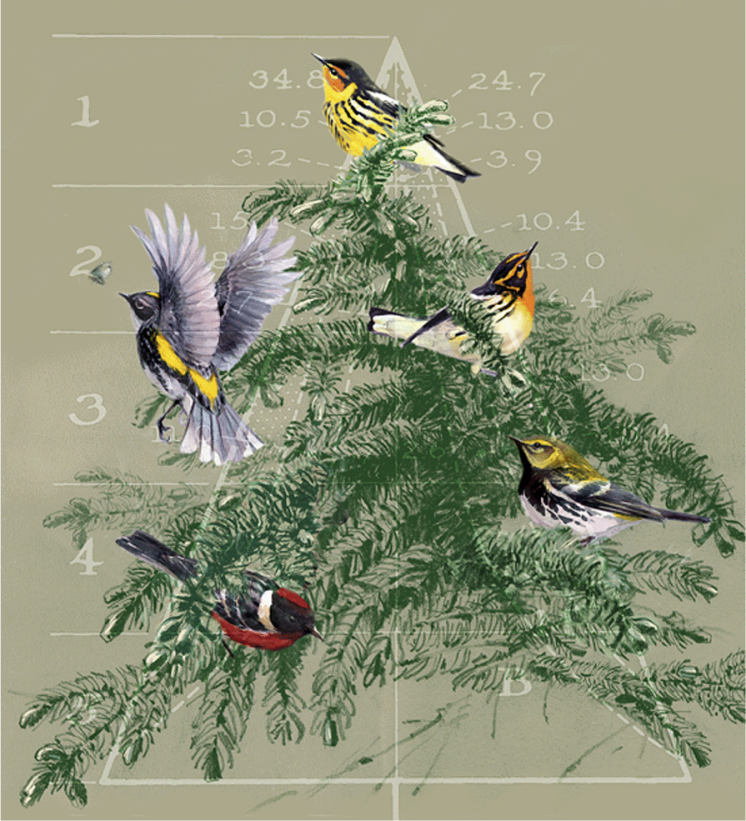 In 1956-7, then graduate student Robert MacArthur set out into the woods to investigate the warblers’ shared living and dining space and discover what factors affected the birds’ relative abundances.

The warblers, he observed, are particular about the arboreal latitude at which they hunt their prey. Cape May warblers prefer the tips of branches at the tops of spruce trees, whereas black-throated green warblers spend most if their time in the dense branches in the middle. The species also differ in habits of motion, diligence at inspecting a tree before moving on, and predilection for grabbing insects out of the air. MacArthur’s elegant 1958 report in Ecology (which was also his doctoral dissertation for Yale) launched a brilliant, too-short career.

To celebrate the centennial of the society, ESA journals staff collected some of the most notable papers published in their pages—which for ESA’s oldest journal, Ecology, reach back nearly 100 years, to 1920. “Notable” papers were selected based on number of citations (90% of the score) tempered by number of downloads (10% of the score, to bolster more recent stand-outs). The editorial staff invited short commentaries on the papers from members of the society, which they published with the paper collections. 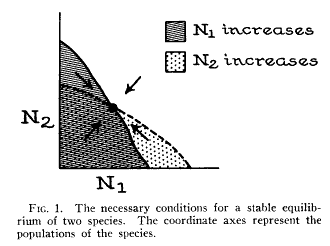 Sixty years ago Robert MacArthur ventured into spruce woods in Maine and Vermont to study five species of warblers “…with the aim of determining the factors controlling the species’ abundances and preventing all but one from being exterminated by competition.” His success in doing so can be found in almost any ecology textbook. Turn to the section on competition. You will almost certainly find a version of his famous imagery on warbler feeding positions. The illustrations are, to this day, remarkable examples of niche partitioning that promotes coexistence. The study is immortalized in numerous testimonials by prominent scientists who were privileged to know and work with MacArthur. Most of those testimonials highlight the article’s breadth, logic, and elimination of competing hypotheses. They praise skilled and patient natural history (determined and persistent might be more apt “…a large number of hours of watching result in disappointingly few seconds of worthwhile observations.”). But when I contemplate this seminal paper I am drawn to figure 1. [see above right] “The necessary conditions for a stable equilibrium of two species.” This prescient, understated figure represents, at least as much as the others, MacArthur’s legacy.