Adorable and fuzzy, American pikas (Ochotona princeps) have become the spokes-critter for the consequences of climate change in alpine areas. These little fuzzballs, more closely related to rabbits than rodents, are specialized for living on the rocky slopes of mountains. They’re very sensitive to hot summer temperatures, and so, as temperatures are predicted to rise, pikas face a perilous future.

Researcher Jennifer Wilkening from the University of Colorado is concerned about the future of the pikas. She’s also concerned about the future of water. Towns like Boulder, Colorado, rely on the water that drains down from the highland areas above it.  Much of this water comes directly from snowmelt, but some of it is stored up in ice features below the surface of rocky (talus) slopes. As temperatures warm, these important reservoirs of freshwater could start disappearing, resulting in reduced water availability downslope.

Sub-surface ice features are also important to pikas. Like ginormous ice cubes hidden below the ground’s surface, rock ice helps modulate the microclimate amidst the rocks and boulders where the pikas hop and zip.

She then turned to the pikas’ poop for evidence. By comparing stress hormone levels in pika feces across the two habitats, Wilkening found that pikas living in habitats buffered by sub-surface ice were less stressed than their counter-pikas who experienced much hotter summers and colder winters.

As a result of this research, presented at the Ecological Society of America Annual Meeting in Sacramento, California, Wilkening suggests that pikas may play an important role as a bioindicator for the health of alpine watersheds, particularly in the face of climate change and melting sub-surface ice. 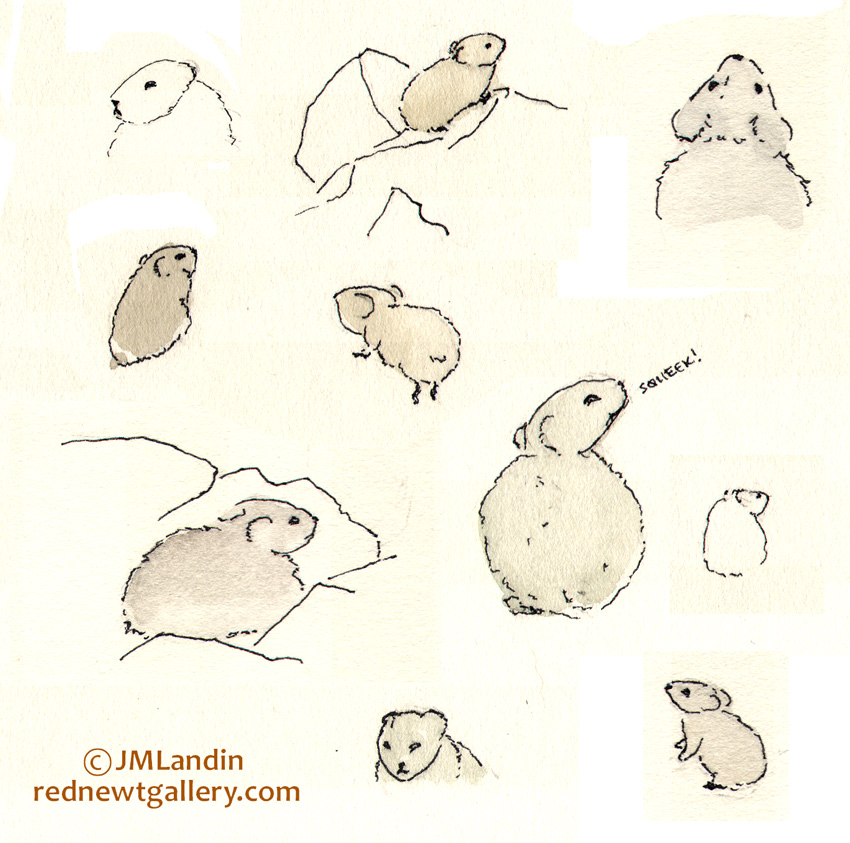 Pika sketch by biological illustrator, Jennifer Landin. Used By permission from the artist.

Dr. Holly Menninger is the Director of Public Science for Your Wild Life at NC State University. There she coordinates citizen science and online science communication activities related to the biodiversity in our daily lives. An entomologist and ecologist by training, she’s a science communicator by passion and practice. Holly, with the WK 15 Eco Comm Crew, led a workshop on advancing science communication through the use of multimedia (including sketching and illustration) at the Annual Meeting. Follow her on Twitter @DrHolly.