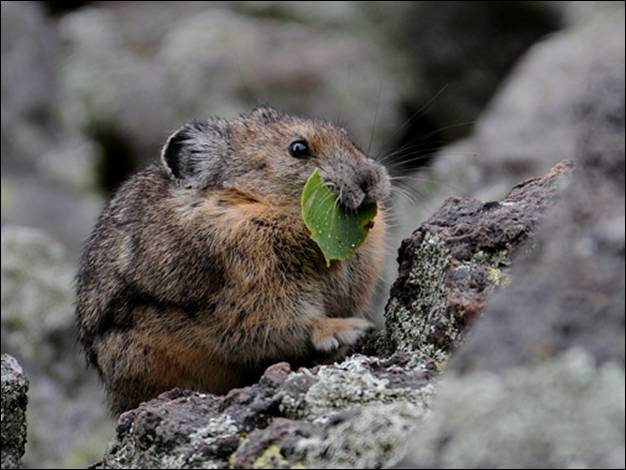 An American pika (Ochotona princeps) feeding on plant life. Pikas do not hibernate in winter. They collect plant materials and store them in “haystacks” that sustain them through the colder months. Credit/Sally King (National Park Service)

The Oscar-winning Disney movie “Frozen” includes a living snowman character named Olaf that would melt and die under the 70 degree temperatures humans and many other animals prefer.

Of course, there are a number of species in the animal kingdom sensitive to heat conditions humans generally find preferable. Some of these are fellow mammals , but not all, are limited to the extreme cold Arctic and Antarctic climates.

At home in loose rock areas in alpine and subalpine mountain regions, American pikas are one such species. Though they bear a resemblance to rodents, pikas are actually members of the lagomorpha order, which includes rabbits and hares. Their North American range includes British Columbia in Canada and the US states of California, Colorado, Idaho, Montana, New Mexico, Nevada, Oregon, Utah, Washington and Wyoming.

Much like the Disney’s Olaf, pikas cannot endure the mid-to-upper 70s temperatures we humans deem comfortably warm for more than a short period.  In fact, pikas would die if exposed to temperatures above 77 degrees for longer than six hours. Alas, the thick-furry coats that keep them snug through a cold-mountain winter prevent them from ever taking in the rays on a warm summer day at the beach. This heat intolerance largely prevents their existence below 8,202 feet in the regions of New Mexico, Nevada and southern California.

And yet, this distinct temperature sensitivity makes them interesting specimens for studying the profound impacts of climate change on ecosystems. During the most recent edition of the Ecologist Goes to Washington podcast, 2014 Ecological Society of America Graduate Student Policy Award winner Johanna Varner (University of Utah) discusses her research into pikas and their importance as climate indicators.

A recent study found that extinction rates for American pikas have increased five-fold in the last 10 years while the rate at which the pikas are moving up mountain slopes has increased 11-fold. The US Fish and Wildlife Service ruled in 2010 that the American pika does not warrant Endangered Species Act protection, but this could change if this population decline significantly worsens.

Luckily, some pikas have proven to be adaptable in their foraging mannerisms. One population of pikas in Oregon’s Columbia River Gorge have adapted to warming temperatures by increasingly eating (and re-ingesting) moss.  Eating moss, which grows in the shadier parts of the animal’s habitat, helps the pikas avoid the blistering (deadly in their case) summer sun while also helping minimize their becoming a victim of predation.

Aside from their obvious appeal as “charismatic fauna”, deserving of Disney characterizations in their own right, some might question why research into preserving pikas is important. As Varner notes in the podcast, pikas provide a number of ecosystem services. They serve as a food source for a number of predators, including weasels, coyotes and birds of prey. They are also “ecosystem engineers” in that their foraging helps promote the diversity and distribution of various plant species and nutrients.

The collective research suggests pikas play an important role in ecosystem biodiversity. Consequently, pika die-offs could have many lasting dire consequences for the environment and serve as a harbinger in forecasting potential climate change impacts on animal and plant life across the greater continental US. For this reason, support for continued research into climate indicator species, such as the pika, is critically important.