Parachuting In: Writing that Drops Readers into the Field of Ecology

This guest post is by Clarisse Hart, a member of the “Eco Comm Crew” behind the upcoming “Beyond the Written Word” science communication workshop (#15) at ESA’s Annual Meeting in Sacramento.

See previous posts from EcoComm Crewmates: “From Oceans to Mountains, it’s all Ecology…Communication!” by Holly Menninger, and “3 Reasons Why We Should Tell Stories about Scientists, Not Just Science” by Bethann Merkle.

“Facts don’t have the power to change someone’s story… your goal is to introduce a new story that will let your facts in,” wrote Annette Simmons in her book, The Story Factor. The quote was a game-changer for me, professionally.

By the time I read the book, I already fancied myself a science communicator. I have an MFA in nonfiction writing. I am a longtime science educator. I am also an ecologist; I spent years tracking whale populations around the Gulf of Maine, and standing thigh-deep in New England bogs trying to fathom the arthropod food web.

But until I read The Story Factor, I was not a storyteller. I considered science writing a more or less translational act, in which jargon is reinterpreted, and research findings are couched in a context that is relevant to the reader’s life. And this is still partly true. As the Outreach Manager at Harvard University’s Harvard Forest, it’s my job to make research findings clear, accessible, and relevant – usually through news releases and policy documents.

This kind of science messaging is a worthwhile skill, one I regularly teach to our students and science staff. But it’s not the whole story.

People want stories they can feel.

We’ll focus on storytelling in the upcoming ESA workshop, “Beyond the Written Word: Advancing Ecology Communication through Multimedia.” There’s good reason for this. The problem with not telling a story – with simply translating scientific facts for the public – is that facts hit our brains, but deliver only a glancing blow to our hearts. And the heart is what motivates people to act – on climate, on biodiversity protection, on water quality. If we’re honest with ourselves as ecologists, it’s the heart, not the brain, that gets us out of bed and into the field – into the humid, buggy, parched, thorny, drenching, or sub-zero-cold field – to do the hard work of ecology every day.

To write to people’s hearts, we need to parachute them into the same world that propels us into the field. We can’t start with a dry research question or even a succinct research finding. Research findings – as my colleague Bethann Merkle points out in her recent EcoTone post – are rarely what grab people and keep them reading.

I suggest we drop readers into our extraordinary moments – the flash of a headlamp in an endangered cat’s eyes; the bizarre stench of 10,000-year-old lake mud; the impossibly disorienting smoke of a tundra fire. Big and small, these are the moments that make ecology come to life.

A story that should have been told

The story that led me to a career in science communication begins not in the field, but at my desk, where a colleague had emailed me a Cape Cod Times article about a beached humpback whale:

WELLFLEET – A large humpback whale was found dead yesterday on an ocean beach in Wellfleet, and marine scientists today are expected to examine the carcass to determine the cause of death.

Little was immediately known about the 42-foot mammal or how it died, except that it washed ashore on Newcomb Hollow Beach, close to the Truro town line.

A handful of people, including officials from the Cape Cod Stranding Network in Buzzards Bay and the Center for Coastal Studies in Provincetown, were at the scene yesterday, but otherwise the event drew little attention. Wellfleet police were unaware of the dead animal when contacted by the Times yesterday afternoon to see whether they had any information.

A follow-up email came just after:

“BTW-I forgot the most important part, it was Beacon (although we don’t know why).”

The Times did not publish a follow-up story. From a factual perspective, there was not much more to say. Beacon’s precise cause of death was never confirmed. The massive equipment needed for a necropsy wasn’t allowed on the beach.

An ecologist’s story is different

Beacon was the first whale I ever saw in the wild. My first sight of her came on my first day at sea. She was a calf traveling with her mom, Echo, and she was still too young to raise her tail for a dive (instead, she just curled it under, a little awkwardly, and sank down). When she finally did learn to dive, she was named by our crew of scientists for a tail pattern that looked like a lighthouse shining in the dark.

Over the years, I saw Beacon countless times from my perch on the research flydeck. She would approach the boat and spyhop and breach, and I was unscientifically besotted with her. I saw hundreds of humpbacks each year, and diligently catalogued their field marks and biopsy samples. Even so, Beacon was an unrivaled favorite.

She was six years old the day she died – finally old enough to have a calf of her own.

Facts need a story to live in

There was still more to Beacon’s story. Ship-strikes – the cause of death most likely for Beacon, and confirmed for several other whales that year – were a frequent occurrence at the time, and remain a problem today. Commercial shipping lanes cross the national marine sanctuary where endangered whales migrate thousands of miles each year to feed. Three years after Beacon died, those shipping lanes were moved 4 miles north, to an area less densely traveled by whales – a coup, but not a total solution.

Unfortunately, in 2004, Beacon sank, like many other casualties of anthropogenic disturbance, without fanfare into the sand.

Many of us working in ecology have had a Beacon moment — the loss of an organism or ecosystem we know so well that it feels personal. Regret over not knowing how and where to tell Beacon’s story was the main reason I dove into science communication as a career.

Since then, I’ve collaborated with journalists, poets, and communicators of all kinds. A consistent theme I hear is envy, over ecologists’ regular access to the most remarkable and intimate moments in nature. One prominent writer told me he considers field ecology “priceless as materia poetica.” I have to agree. There aren’t many humans creeping through the woods at night to track the quiet miracle of spiders building their webs, or laying prostrate on the beach, arms wide and nose plugged, to measure the bloody comb of a beached whale’s mouth. (In graduate school, I wrote a poem about the latter experience. It won a prize from the Academy of American Poets.)

Ecologists as storytellers for the ecosystems we love

Nearly a decade after Beacon died, another North Atlantic humpback, Istar, was struck dead by a ship. This time, the event was covered thoroughly in regional news. The difference was scientists’ stories. Istar, their research showed, was at least 40 years old. She was a mother of 11 and a grandmother of 12. They had been photo-documenting her since the 1970s.

Reader comments poured in. Follow-up stories went beyond this single whale’s death, and reported the wider threat that ship-strikes pose in the North Atlantic. Istar’s story shone a spotlight on the facts of an ecological crisis.

A story — a real story, with emotions and facts and a beginning, middle, and end — can have far more impact than a narrative based on facts alone.

Ecology is full of stories. It’s our job to tell them.

We hope you’ll join us in Sacramento.

Click here to learn more and register for the workshop.

Clarisse Hart is the Outreach and Education Manager at Harvard Forest—a department of Harvard University and a Long-Term Ecological Research site. At Harvard Forest, she manages all public relations, including press outreach, print publications, the web, video, and social media; while also managing “K-to-gray” educational programs and directing the Fisher Museum. Prior to her work in communication, she was a field tech studying spiders, carnivorous plants, and humpback whales (though never at the same time). She has an MFA in Nonfiction Writing from Emerson College and a BA in Environmental Studies from Mount Holyoke College.

Clarisse is one of several co-organizers for the upcoming Beyond the Written Word: Advancing Ecology Communication through Multimedia workshop being held at the 2014 ESA annual meeting. This post is the third article in an EcoTone series on advancing communication skills among ecologists and others in ecology-related careers. Click here to see all articles in this series. 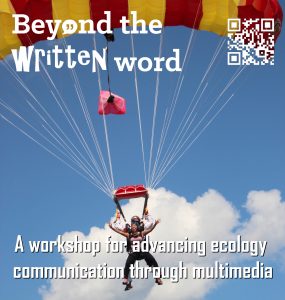