3 Reasons Why We Should Tell Stories about Scientists, Not Just Science

This guest post is by Bethann Merkle, a member of the “Eco Comm Crew” behind the upcoming “Beyond the Written Word” science communication workshop (#15) at ESA’s Annual Meeting in Sacramento.

Organizers for the upcoming science communication workshop at ESA’s Annual Meeting (WK 15 – Beyond the written word) had a soul-searching conversation not long ago. We were discussing why we are driven to lead a workshop that focuses on communications skill building. Someone said:

I feel like we will be a success if ecologists who have never had a chance to communicate about science have a chance to do that […] Scientists telling stories in their own voices is super compelling.

That sentiment epitomizes why I am a science communicator, and why I think we all can be.

After all, what scientists do affects us on a daily basis. Researchers influence the varieties of strawberries we eat, the chemical composition of our toothpaste and the glue that holds our soles onto the bottom of our shoes. Others dedicate their lives to ensuring the watersheds that provide our drinking water are clean, or to conserving the bees that pollinate those strawberries. Getting to know the scientists behind the science all around us is a fundamental part of telling these science stories, and to telling your own.

Being able to relate to a researcher is key to having an interest in what that person researches. When a science story includes the scientist, a reader can hope for a quirky anecdote, a personal revelation that is highly intriguing, or even a zany description of the scientist’s physical attributes.

Story elements focused on a real live human with hopes, fears, and curiosity enable us to relate to scientists as people, not strangers in lab coats or helicopters doing incomprehensibly complicated things. See these sites (1, 2, and 3) for more on this subject from scientists who talk about their own work.

2. Getting to know scientists is one of the perks of communicating about science.

I deeply enjoy delving beneath the professional veneer of a scientist. It is a treasure hunt; the objective being to reveal the humanity and motivations that inspire individuals to spend most of their lives searching for the answers to life’s persistent questions by studying things as minute as genes and as complicated as statistical modeling.

When I have the chance, I focus the whole story on the scientist.

3. Sometimes, focusing on the scientist pays off.

A couple of weeks ago, an article series I did on caribou researchers won second prize for Best Investigative or In-Depth Reporting at the annual Quebec Community Newspaper Association awards ceremony. Better than the award itself was what the judge had to say about the angle I chose.

Andy Riga, from The Gazette in Montreal wrote:

This series stood out because it not only looked at scientific study but also painted a picture of the researchers behind the science.

Telling a science story from the point of view of the scientist enables the reader/viewer to imagine themselves in that position. Humans find humans endlessly fascinating; learning about how someone else made an ecological discovery can be more interesting that the discovery itself. Knowing that you overcame your fear of heights to study mountain goats can capture the attention and imagination of someone who has never even seen the animal.

For example, the Conserving Quebec’s Caribou series came to life at a potluck, where I was speaking with Chrystel, now a PhD student at Université Laval (Quebec City, Quebec). It turns out Chrystel’s fiancée Alex is also a caribou researcher, although they study different questions in different herds.

During the interview process, what struck me was how differently Chrystel and Alex thought about their work, their study species, and the issues that influence them.

Alex has been deeply interested in caribou for most of his life, while Chrystel had never thought much about them before starting her graduate degree.

The differences don’t end there.

Chrystel’s work focuses on conserving animals heavily impacted by forestry, so there are a lot of associated factors (economic, environmental, etc.) that come into play. On the other hand, Alex’s work is much more focused on the question of viable hunting management, and the stakes are high – First Nations rights and traditions, highly valuable outfitting businesses, etc.

In both cases, it would have been easy to overlook the humanity of these researchers…in favour of focusing on the debate, money, etc. Comparing and contrasting their approaches as people doing science wasn’t something a journalist had ever asked of them. Instead, we were able to offer an exclusive “behind the scenes” look at the scientists whose research is being used to determine the future of Quebec’s caribou.

That’s what our workshop is all about.

Our workshop takes participants beyond why communicating science is important. We’re empowering ecologists to better communicate the stories of our science (including stories about the people doing the science) in creative, compelling and innovative ways. Please sign up and join us.

Bethann Garramon Merkle is an illustrator, photographer, and wordsmith who believes science and sustainability matter—her passion is communicating why. She is one of several co-organizers for the upcoming Beyond the Written Word: Advancing Ecology Communication through Multimedia workshop being held at the 2014 ESA annual meeting. This post is adapted from an earlier version on her blog, and is the second article in an EcoTone series on advancing communication skills among ecologists and others in ecology-related careers. Click here to see all articles in this series. 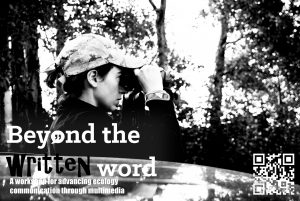