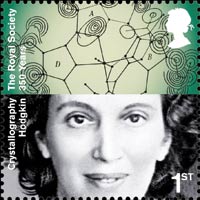 Today’s Google doodle celebrates Dorothy Hodgkin, neé Crowfoot, a founder of protein crystallography who famously solved the 3-dimentional molecular structure of of the protein hormone insulin in 1969. The project took 35 years. She won the Nobel Prize in Chemistry in 1964 for her structure of vitamin B12.

The doodle depicts Hodgkin’s 1945 model of penicillin. She used a Hollerith punch card machine to help with the laborious calculations, making her the first scientist to use electronic computer to solve a biochemical problem. She chaired a committee to bring programmable computers to the scientific labs at Oxford. Modern protein crystallography depends on the computational power of modern computers for breakthroughs in structural biology.

Her work on penicillin brought international attention and prompted her election to the Royal Society, in 1947. She was only the third woman to be elected.

Hodgkin was born in Cairo in 1910. Her parents were anthropologists who spent most of their time in Egypt, leaving Dorothy and her sisters in England. As a 16th birthday present, her mother Grace hood Crowfoot gave her a book by the physicist Sir William Henry Bragg  that explained the use of X-rays to study crystals — a new a exciting science in 1926.

The United Nations has designated 2014 the International Year of Crystallography to commemorate the centennial of the groundbreaking experiments in X-ray diffraction. 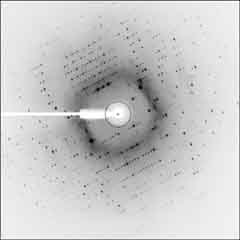 Bragg and his son, William Laurence Bragg, developed a method to calculate the arrangement of atoms in molecules frozen in crystal form from the pattern cast on photographic film after an X-ray beam passed through the crystal. Their law expanded on Max von Laue’s observations of X-ray diffraction, for which he shared the Nobel Prize in 1914. (The Braggs also won the Nobel, in 1915). When X-rays encounter electron densities in the crystal they are deflected and the resulting interference of X-ray waves produces a pattern on film where overlapping waves amplify each other. The pattern can be used to back-calculate the locations of the atoms using some fairly challenging mathematics.

Hodgkin learned the bench technique and math as an undergraduate at Somerville College, Oxford. She went on to graduate studies at Cambridge with John Desmond Bernal, with whom she determined the first 3-dimensional structure of a complex biological molecule, pepsin, in 1936.