Ill-informed prophecies and the future of women in ecology

In May 2013, Frontiers in Ecology and the Environment published an article on “The future of ecology: a collision of expectations and desires?” (pdf) by Jeffrey Lockwood, Derek Reiners, and William Reiners, based on a survey of ESA members. The authors’ conclusions about gender and career preferences generated some controversy. A peer-reviewed letter by Heather Throop, Karen Mabry, Shannon McCauley, and Krista Glazewski (pdf) appeared in the December 2013 issue of Frontiers, along with the authors’ reply (pdf). In this guest post, Nathalie Pettorelli discusses her own response to the Lockwood paper, in the context of the broader sociological literature on women in science.

I AM regularly amazed by the amount of time we spend categorizing the people, animals, landscapes, or objects around us. Grouping makes life easy; it simplifies the level of complexity surrounding us, creating manageable units. Such stereotyping is just part of the suite of mechanisms that we use to feel secure about our place in society and our understanding of the world. Therefore, whatever set of characteristics you possess, be they linked to your ethnicity, gender, nationality or size, those around you will always have preconceptions associated with them, and, in my experience, this arises in whatever part of the world you are visiting and in whatever social context you are evolving.

Interestingly, the same goes for our perceptions of the natural world. For example, we are trained to think about population dynamics modelling as informed by data on population structure according to age and sex, or to classify landscapes in terms of land cover categories. In all these situations, we define categories based on a more or less arbitrary set of criteria that we ourselves delineate.

Of course, as soon as we split the world into categories, then these categories must be contrasted – if they were the same, there would just be one big category. One contrast that keeps on being discussed in the scientific community nowadays is related to men and women, their differences, and how this may affect their ability to become successful scientists.

From work aiming to contrast men and women’s quantitative skills (see e.g., Latkin 2013, Stoet & Geary 2013) and ability to collaborate (Abramo et al. 2013), to research challenging the assumption that men and women have equal spatial abilities (see e.g., Voyer et al. 1995, Voyer 2011) and studies exploring how gender rejection sensitivity may undermine the success of women in science (Ahlqvist et al. 2013), the amount of energy and resources that have been spent in trying to establish significant dissimilarities between these two groups is remarkable (Miller & Halpern 2013).

The paper by Jeffrey Lockwood and colleagues published in May 2013 in Frontiers in Ecology and the Environment is another example of research aiming to discuss potential differences between men and women in science. The authors carried out a survey targeting the Ecological Society of America’s (ESA’s) members, and used the information collected to examine whether ecologists of different age and gender do work and derive professional satisfaction in the same ways.

One of the key results from Lockwood et al.’s paper is that women report greater fulfilment from teaching and men greater fulfilment from data analysis and written communication. Following these results, the authors decided to derive recommendations in terms of what will need to be done in the coming years to advance ecological science; they suggest, in particular, that “[major research] institutions change their systems of advancement to reflect the interests of female faculty” and “reward what women have to offer”.

My feeling is that these types of studies and recommendations present female ecologists as a homogenous group, reinforcing clichés of what they are supposed to like and want, and failing to recognize the huge amount of individual variability in the aspirations of women in ecology. I believe this has the potential to damage the confidence and career prospects of many scientists worldwide, being unlikely to benefit our community as a whole.

On top of their comments, I would also address the issue of combining the outputs from a survey that does not appropriately represent the construct being investigated (Throop et al. 2013) with simplistic analyses and extrapolation beyond the observed range of conditions to try to predict the future of the field of ecology. I indeed fail to believe that the patterns derived from the answers gathered from ~1,200 US-based individuals, considered equivalent in all things except gender and age, are representative of the desires and expectations of the global, diverse community of ecologists. This leads me to reasonable doubts about the authors’ predictions on the future of this scientific discipline.

I would also question the adequateness of publishing this type of study in journals such as Frontiers. As pointed out by the recent review by Miller & Halpern in 2013, a new science of cognitive sex differences is emerging and, with it, strong expertise among psychologists. Yet Lockwood et al.’s paper, with aims that clearly and singly fall under the remit of social sciences, ended up being considered for publication in a journal that primarily focuses on all aspects of ecology and environmental science.

I cannot stop wondering why this happened; surely one would always hope that research articles are preferentially submitted to the relevant scientific community to guarantee that the work will be assessed by experts in the given field, and to secure the best feedback. Lockwood et al.’s stated aims in this study are to “enhance the goals of ecology” and “enhance the diversity of its practitioners.” These are important goals. I do hope that future attempts at unveiling the factors shaping the current paucity of women in any scientific discipline will make use of the best available expertise, so that meaningful progress can be witnessed.

As research on the factors driving the lack of women in Science, Technology, Engineering and Mathematics (STEM) progresses, it becomes more and more apparent that a diverse scientific community is likely to be more creative and therefore perform better than a homogeneous one (UKRC 2010, Royal Society of Edinburgh 2012). Faced with the current set of challenges associated with global environmental change, the ecological community requires all the brainpower it can get. In that respect, no bright, enthusiastic, trained scientist should be held back because of something as irrelevant as their gender.

Stereotypes are defined as widely held but fixed and oversimplified images of a particular type of person. A commonly used stereotype is the woman as the carer (see e.g., Hanlon 2012, Long 2012), a stereotype that can be spotted throughout Lockwood et al.’s paper, particularly in quotes such as “women are more likely than men to favor work with a clear social purpose” or “women may perceive classroom teaching as having a positive effect on society”.

Stereotypes, should these be applied to men or women, do not help to build a cohesive, integrative and diverse scientific community. Few individuals recognize themselves in stereotypes and no one likes to have their aspirations limited by others’ expectations of what they can achieve. Implying that women prefer teaching and dislike writing grant and analysing data is likely to reinforce that carer stereotype, and alienate the many women who do want to write grants and analyse data.

The disparity between the number of women receiving PhDs in STEM and those hired as junior faculty is a persistent one (see Martin 2012 for Ecology), and coupled with the paucity of women at senior levels (see e.g., NSF 2008, European Commission 2009), it seems to clearly indicate that women’s advancement within academic science may be actively impeded (Moss-Racusin et al. 2012). Data so far show that addressing the loss of qualified and skilled women from science and engineering careers is a complex issue (Hill et al. 2010, Ceci & Williams 2011, McGuire et al. 2010, O’Brien & Hapgood 2012, Adamo 2013), and that likely solutions involve harmonizing the costs and benefits of pursuing a scientific career for men and women (Sumner & Pettorelli 2011).

If we are to seriously discuss best ways to achieve gender balance in science at all levels of seniority and increase overall diversity, then I believe there are simple first steps that professional societies such as the Ecological Society of America or the Society for Conservation Biology should focus on: (1) tackling gender imbalances in editorial opportunities, key note speakers invitation and award nominations; and (2) providing equal access to appropriate role models and mentoring opportunities. As described by Lockwood and colleagues, “today’s modal ecologist is a 55-year-old male professor”. The future community that I’m hoping for is one where there will be no typical tomorrow’s ecologist.

Mary Agnes Chase (1869 – 1963) photographed on Pico das Agulhas Negras (9,157 ft) during field work in Brazil in 1924 or 1925. Chase surmounted a limited formal education and institutional barriers to become the foremost expert on grasses of the early twentieth century, publishing over 70 papers and conducting extensive field work in the Americas. She also risked arrest, and the ire of her employers at the USDA, to demonstrate for women’s suffrage and self determination. Smithsonian Institution Archives SIA RU000229, Box 20, Folder 1; Field Book Project. 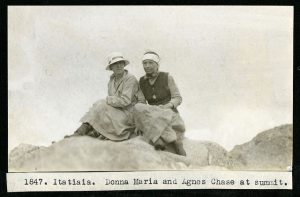