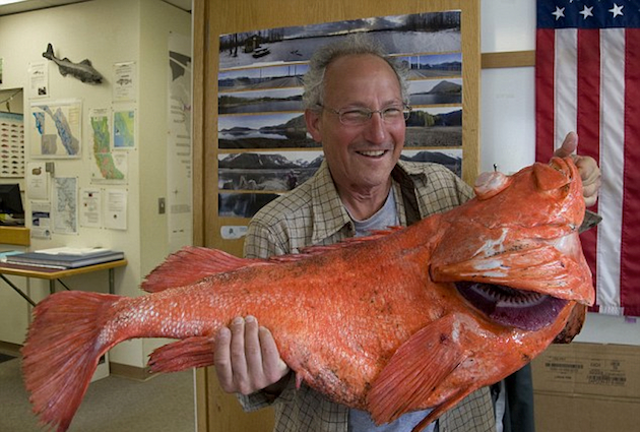 THIS STORY about a man and fish (a shortraker rockfish, Sebastes borealis) started as a little local news spot in the Daily Sitka Sentinel in late June – man catches record-breaking 39.08-pound rockfish! Could be 200 years old!

[Update 7/8/2013 — The Alaska Dispatch reported Friday that Alaska Fish and Game determined the fish was only 64 years old. — Thanks to Benjamin Walther for the tip.]

It suddenly blew up into a wide-release story in the slow news week around the July 4th holiday, with headlines like this one from io9: “Man catches freaky 200-year-old fish, promptly kills it” or a slightly different take from the L.A. Times: “Ancient rockfish caught in Alaska: Why nobody threw it back.”

A graduate student posting as “Dr What?” took up oi9’s gauntlet:

“This guys was fishing at 900 feet. That depth is the equivilent of 30 atmospheres of pressure. Rockfish have a gas filled sack called a swim bladder that helps them maintain their buoancy. From that depth, the swim bladder would have massively expanded and almost surely killed the fish before he got it to the surface. I study rockfishes (I’m a marine biologist in Central California) and anything deeper than about 400 feet dies when you get it to the surface. Anything deeper than about 50 feet needs assistance returning to the bottom to recompress.

This guy couldn’t have known what he had until he got it the surface and by then it was dead. Cut him some slack.”

A long thread ensues in which Dr What? explains some science and explains some of his own personal opinions (without mistaking one for the other, for the most part – which isn’t easy), and wins over a few io9 commentators. Occasionally, fisheries conservationists defend recreational fishermen, comments are worth reading, and people play nice on the internet.

I could not confirm Dr What?’s statement that the fish’s otoliths (analogous to inner ear bones in a mammal, fish otoliths accumulate rings of carbonate that record years lived) put the fish’s age at closer to 100 years, however. As far as I can tell, the Alaska Department of Fish and Game is still working on it.

IN OTHER fish news, a report published on e-View in Frontiers in Ecology and the Environment this week found that silky sharks are swimming head-on into “fish attracting devices” (FADs—basically, tangles of junk and old nets with a strange and mysterious magnetism for tuna) and becoming entangled. The authors estimate that hundreds of thousands of silky sharks die in FADs, yearly. Read about it in Conservation Magazine.