Lisa Schulte Moore won the inaugural ESA2013 Science Cafe Prize with her vision for change in modern agriculture based on ecological knowledge and experimentation. Schulte Moore, a professor of landscape ecology at Iowa State University, will speak at the Aster Cafe on the riverfront in Minneapolis, Minnesota during ESA’s annual meeting in August. Read her winning entry below! 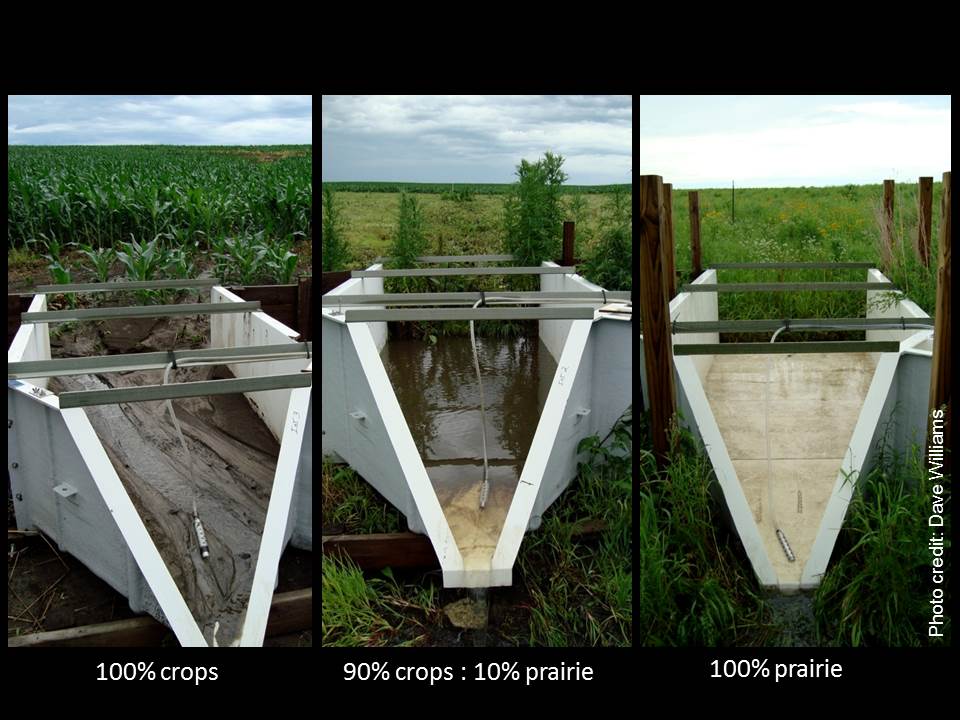 Soil erosion….or not. Even small amounts of perennials can have a dramatic impact on the environmental benefits provided by row-cropped agricultural lands. This image depicts the ability of native prairie to keep soil in farm fields, where it can produce crops, as opposed to allowing it to move into streams, where it becomes a serious pollutant. The STRIPS Project has shown that farm fields with just 10% of their area converted to native prairie produce diverse environmental benefits in amounts greatly disproportionate to their extent compared to fields entirely in row-crop production. This image was taken after a 4 inch rain. Caption, Lisa Schulte Moore. Photo, Dave Williams.

Want to stem biodiversity loss, enhance fresh water supplies, curtail climate change AND improve people’s lives?  Then change modern agriculture.  Worldwide, agriculture is responsible for more habitat conversion, water pollution, and global warming potential than any other sector of the economy.  Furthermore, the current system of food production fails to provide adequate nourishment for one-seventh of the planet’s human inhabitants.  Where do we begin this monumental task?  Iowa, USA.

Iowa’s status as the leading producer of corn, soy, pork, and eggs and first-in-the-nation caucuses means the state has disproportionate influence on US farm bills — legislation that delivers food aid to the needy, incentivizes farming practices, and provides the bulk of conservation funding nationwide.  While focused within the nation’s borders, farm bill legislation has a global ripple effect by tipping the economic playing field.  Thus, I posit, if you make a better Iowa, you make a better world.  How do we do that?  With perennials and partnerships.