the drones are coming

Unmanned vehicles bring in the data 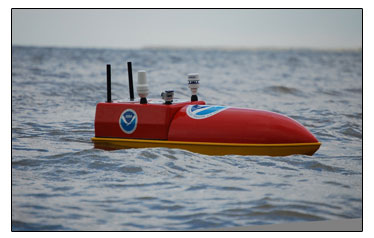 Earlier this month, a couple of environmental scientists from NOAA and WWF turned up at a symposium on drones in company with journalists, law & order types, engineers, gearheads and think tank fellows.

The scientists were on the pro-drone docket. Drones can look for oil spills and tangles of derelict fishing nets, said Robbie Hood, Director of Unmanned Aircraft Systems at NOAA, speaking to an overflowing room at the New America Foundation (plus the live stream and viewers on C-Span). They can fly into dangerous weather conditions and remote locations. We’re not going to fly a lot of manned aircraft up there in the arctic because it’s so dangerous, she said, but maybe NOAA will send the drone fleet.

Carter Roberts, President and CEO of World Wildlife Fund wanted to track animals with drones, and survey the depredations of man. He also wanted to track the people tracking animals – nefarious people, from his point of view. Some of the most wonderful parks in the world have been enshrined along borders, he said, because parks are nice buffer zones – they are mechanisms for neighboring countries to resolve disputes. This, he implied, is a benefit to people who want to skirt the law. Roberts wants to use drones to track down poachers and cross-border crime syndicates, “shadowy networks that operate across borders” and use the proceeds from illegal wildlife trade to buy guns and fund conflict.

Drones in their many forms have potential to deliver valuable surveillance data for ecology – and for other applications you can imagine. An octocopter hovers over a wheat field on the cover of the April issue of Frontiers in Ecology and the Environment, illustrating Karen Anderson’s and Kevin Gaston’s view that “Lightweight unmanned aerial vehicles will revolutionize spatial ecology”. They outline the existing options, from modified MQ-9 Predator-B vehicles (expensive!) to DIY kit deals you can fly from your smartphone (US$400).

Our overseas activities and the oncoming swarm of domestic unmanned aerial vehicles (UAVs) have stirred up necessary debates over what technology we will chose to allow. Established interests care a lot about the labels we use. Sometime earlier in the morning session, another panelist had expressed displeasure with the label ‘drone.’ Michael Toscano, President and CEO of Association for Unmanned Vehicle Systems International, aggressively asserted that unmanned aircraft are not drones because a person, a human being, pilots the vehicles from a remote location. The aircraft aren’t robots (yet). Unstated, but alluded to by others, was the complaint that ‘drone’ evokes an unfair primal reaction keyed to the image of robotic and implacable death from the sky. (Toscano also asserted that UAV’s will eliminate hunger and so advance the efficiency of agriculture that all future population increases will be covered. This incredible bit of propaganda prompted a gleeful stream of #DRONE #DRONE #DRONE on twitter.)

Asked about the image problem, Hood said NOAA is sensitive to how the data will be used. NOAA already does remote sensing, so the new drones kind of blend in with the satellites, balloons and buoys. WWF’s Roberts said that we need to do everything we can to win the war to protect wildlife. Remote flying isn’t a big deal in remote places, he said, specifying that “if you’re talking about the Kalahari Desert, the privacy issues aren’t as great as they might be in downtown Washington, DC.” Because small number of people in the Kalahari lack the clout to effectively protest.

Meanwhile, this cool thing appeared in the 3 May issue of Science: Controlled Flight of a Biologically Inspired, Insect-Scale Robot.