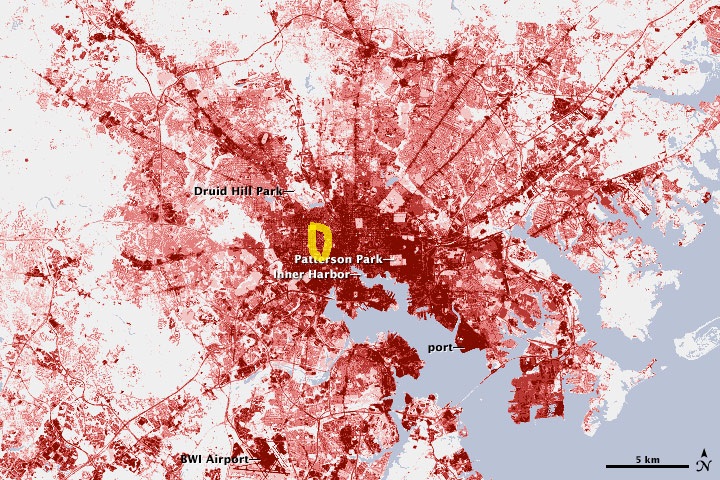 IN the first summer after my move from the cool green climes of western Washington State to Washington, DC, I gained a primal, physical understanding the urban heat island effect. Summer in the District of Columbia is a hot, humid shock for a native northwesterner, and last summer was record-breaking hot. Cycling away on humid summer evenings from the baking concrete and asphalt canyons of downtown, the steady progression into increasingly leafy residential neighborhoods felt like an essential reward, without which the long, sweaty uphill climb would not be psychologically tenable. A patch of woods, one of the many remnant forts of mostly forgotten historical significance dotting our nation’s capital, seemed to breathe blessed, refrigerated air over me as I turned the corner on the last leg of my journey. Thank you, elder generations, for this gift of evapotranspiration!

That patch of woods is, of course, contributing more than a cool breeze to passing commuters. It is an ecological refuge, an absorbent surface during intense thunderstorms of the midatlantic summer, and a sponge for nitrogen and phosphorus washing off city streets and lawns. It’s an all-season draw for joggers, dog-walkers, and folks out for an evening stroll.  Parks, playgrounds and tree-lined streets make this working class (though, like much of Washington, rapidly gentrifying) neighborhood a pleasant place to live. And having a pleasant place to live is not trivial, nor is it just a marker of safety and economic privilege. It confers better health and well-being.

“We had this hypothesis that there is a link between the social revitalization and ecological revitalization of urban neighborhoods,” said Peter Groffman, a microbial ecologist at the Cary Institute of Ecosystem Studies in Millbrook, New York. Organizations like the USDA Forest Service and Baltimore’s Parks & People Foundation had observed the connection for many years, he said. The people on the ground say that projects that improve water quality by planting vacant lots, parking strips, and other urban spaces with trees and community gardens also bring people out of doors and teach local kids about their environment – and do so at lower cost than traditional engineering solutions to sewage management and stormwater runoff.

When you bring neighbors outdoors to work on a shared community problem, the project brings people together. It creates, as the sociologists like to say, “social cohesion.” People see that they have power over their environment – that, as a group, they have access to power and city services. They start to demand access to other services that residents of wealthier parts of the city may already enjoy, like libraries, more frequent trash pickup, and street maintenance. Sociologists see a positive feedback from investment in public spaces. People put more energy into their own yards and property, and open new businesses in the neighborhood. Quality of life starts to improve. This is the theory. There were many anecdotal reports that ecological restoration could also benefit people, Groffman said, but to persuade municipal governments to buy in, more quantitative examples were needed.

An opportunity to experiment arose because the city of Baltimore needed to buy into some kind of solution for its water pollution problem. Like many older cities, Baltimore is coping with aging infrastructure, and a real problem with its decaying sanitary sewer system. Many of the pipes were laid down a hundred years ago. Pipes do not last forever; sewers are constructed with the expectation of repair and eventual replacement. But that never happened. This has led to some sensational eruptions of raw sewage, and more invidious underground seepage.

“So the way it plays out is, there are leaks. Spectacular sewage fountains, or hidden leaks that show up as declining water quality,” said Groffman. In 2002, the EPA sued the city under the Clean Water Act, forcing city officials to agree to invest $900 million in sewer upgrades and pay $600,000 in fines. Baltimore County has settled on a similar agreement in reparation for over 600 spills between 1997 and 2005. The agreements provide several million dollars for environment projects to keep nitrogen and phosphorus out of Chesapeake Bay, where the nutrients feed problematic blooms of algae.

“There is a real flow of dollars associated with ecological restoration,” said Groffman. Strict federal mandates are powerful incentives, and they open up opportunities for ecologists to work with urban planners and administrators. Groffman says this is a valuable insight he has gained from collaborating with Baltimore city foundations and government services. “As ecologists, we’ll get much more out of projects that tap into existing money, incentives, and community needs.”

Groffman is the senior author on a paper out this month in Frontiers in Ecology and the Environment detailing a 930 acre test case spread over 11 densely urban neighborhoods of west and southwest Baltimore. Watershed 263 is a partnership of Parks & People, the Cary Institute, the Forest Service, Baltimore’s municipal Department of Public Works, and neighborhood volunteers. The area is generally underserved, and economically disadvantaged. Trees shade only about 5.5 percent of the WS263 neighborhoods, compared to a 17.32 percent city-wide average. 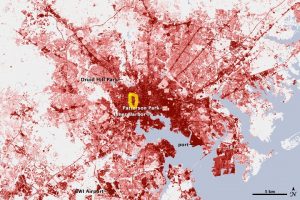