In observance of Juneteenth the ESA offices are closed. | Learn About Diversity in Ecology

Josh Miller is one among a small cadre of ecologists looking at living ecosystems through the relics of their dead. 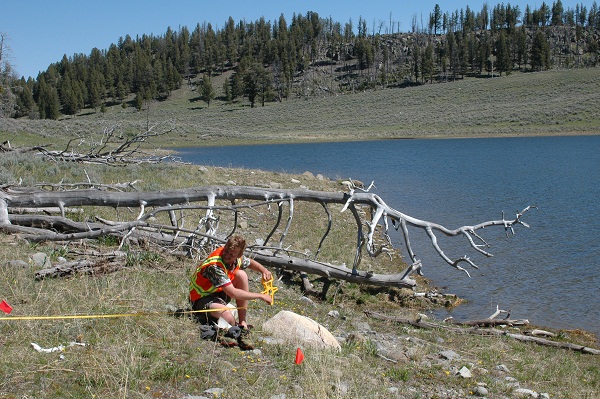 JOSH Miller likes to call himself a conservation paleobiologist. It’s a label that makes sense when he explains how he uses bones as up-to-last-season information on living animal populations.

“At parties I used to say, well—I’m a paleontologist; I study modern ecosystems,” Miller said. That sounded counterintuitive, so he needed a new designation, hence the conservation angle. “There are quite a few of us taking up that mantle, people passionately looking at bones—mostly in marine environments. People have done a lot with shells.”

Bones, he says, are evidence of which animals lived where, and in what relative numbers. They provide baseline ecological data on range animals complementary to aerial counts, adding an historical component to live observation. In his November research report in Ecology, he assesses the habitat use of elk in Yellowstone National Park by their bones and antlers, testing his method against several decades of the Park Service’s meticulous observations.

His work with modern animals started as an inquiry into the fidelity of bone remains to the living ecosystems of the past. He wanted to know how faithfully the fossil record archived historical populations, variability, and change—if digging up 72 Triceratops and 44 Tyrannosaurus conjured up something real about the relative numbers of the dinosaurs when they were alive, and the ecosystem  they lived in so many millions of years ago. “Do those data mean anything, or is it just some random, biased grab bag?” he wondered.

He started looking at modern, living species that could help answer the question by experiment, going out with a team of helpers among the bison, elk, and deer on the vast rolling grasslands and forests of Yellowstone’s northern range for three summers, to catalog the remains of elk of years past, They zig-zagged down huge, kilometer long sample plots looking for bones, antlers, scat—anything with a bone in it.

“It turns out that bones are really informative,” he said. Bone and antler concentrations track what park managers know about Yellowstone elk from aerial observations. “This opened up a completely unexpected opportunity for studying modern ecosystems.”

Reconstructing animal community structure and habitat use through the bones of past generations is a new idea. Until recently, common knowledge held that bones just don’t last that long. But Miller has found that they can last for hundreds of years.  Bones weather in a stereotypical pattern, from fresh to falling apart. He calibrated weathering in the Yellowstone bones and antlers through radiocarbon dating, gaining a familiarity that would allow him to pick up a bone and know it had seen a year, 20 years, or 80 to 100 years or more on the open ground.

“When I went out to Yellowstone for the first time, I don’t think the park managers thought I would find anything, but the feeling was that I couldn’t harm anything. They patted me on my head and sent me on my way,” said Miller. “It was fun to bring the managers my progress reports and watch their eyes bug out.”

Concentrations of bones and antlers are a legacy of life and death on the range. They mark where the animals were at critical times in their lives, during the hormonal surges that shed antlers, through the dangers of birth, and at the final forfeit to predators or the ravages of the elements (death too, is a special time of life). In particular, Miller could identify where the animals congregated in late winter, and where they calved in late spring, two harrowing times for elk.

Bull elk shed their antlers in late winter, a cold, hard season of sparse forage. Too poor in nutrients to interest most scavengers, heavy, and awkwardly shaped for displacement by the elements, antlers tend to stay where they fall. Miller found that, for the most part, the bones of calves don’t travel far either, even in the mouths of predators. The bones of calves mark the range where their mothers sought plentiful food to fuel months of nursing, and shelter to hide their vulnerable newborns.

Old bones from past decades outline a range consistent with the living herd. Miller saw only moderate shifts in a few areas, even given the many recent changes at Yellowstone over the last couple of decades: the prodigious wildfires of 1988, repatriation of grey wolves starting in 1995, and regrowth of willows, aspen, and cottonwoods, in decline since the loss of the wolves in the 1920s.,.

The wolves’ influence on elk and elk behavior is common wisdom, says Miller, “but this is another area where a deeper temporal perspective is valuable.” The data Yellowstone does have on its animal populations in unusually rich, however, and a powerful resource. With the return of the wolves after near seventy-year’s year absence, the park service embarked on an intensive program of observation, databasing every known wolf kill. “It was an amazing effort; binoculars on wolves constantly.” Every time wolves killed an elk, observers collected a weight-bearing metatarsal, the lower bone of the rear legs, as a measure of the size of the animal. Visiting Yellowstone years later, Miller could find the matching metatarsal bone at the recorded locations.

Because bones can last decades to centuries in the Yellowstone environment, they extend the window of data supplied by observation back in time, potentially giving managers useful context for understanding contemporary trends. In a time of flux, when climate is uncertain, and animals face many pressures, Miller thinks historical context could be useful for sorting out which changes matter and which are typical booms, busts and shifts in landscape use. The job of a manager isn’t easy.

“You’re mandated with knowing how to maintain an ecosystem for the next fifty or a hundred years. Often, you’re charged with that task with only a few years or maybe a decade’s worth of observations. That’s a daunting challenge,” said Miller. In his new calling in ecology, he aims to help fill the data deficit—and he thinks the answers are laying on the ground, waiting to be collected.