Earlier this afternoon, the National Science Foundation (NSF) celebrated the 60th anniversary of its Graduate Research Fellowship Program (GRFP), the nation’s oldest fellowship program directly supporting graduate students in science, technology, engineering and mathematics.  Featuring high-level science luminaries such as Nobel prize-winner and Department of Energy Secretary Steven Chu, the program highlighted the contributions of NSF-supported graduate research fellows and underscored the agency’s continued commitment to supporting aspiring scientists and engineers.  The program supports individuals of high potential early in their careers who receive an annual stipend and the freedom to conduct their own research at any accredited US institution of graduate research they choose.

The highly competitive program (this year, 12,000 individuals applied for 2,000 slots) started in 1952 when winners were notified via telegram.  In the past 60 years, the agency has supported over 45,500 graduate fellows, among them Ben Bernanke, Chairman of the US Federal Reserve, Google co-founder Sergey Brin and Maxine Singer, President Emeritus, Carnegie Institution for Science.

A highlight of the afternoon celebration was the showing of three short videos, the winning entries of NSF’s video contest that asked current GRFs to submit 90 second videos showcasing how their research can “help shape the future-for them as individuals, for their fields of work, even for the world.”

Erica Staaterman, a graduate student in marine biology at the University of Miami won 3rd prize for her video showing her work in acoustic navigation in reef fish larvae.  Candy Hwang, a graduate student in chemistry at the University of Southern California won 2nd prize for her video entry depicting her aspirations to reduce fossil fuels and mitigate climate change.  When she stepped to the podium to accept her prize for the video, Hwang shared with the audience her extreme excitement when she first learned she had won a NSF Graduate Research Fellowship.  Waking up at 4 am, she fairly quivered with excitement and a renewed sense of urgency in making a difference in the world.  Upon arriving at her lab however, her shaking hands made lab work that day impossible and her advisor kindly told her to go home and calm down first.  Eric Keen, a marine biologist at the University of California in San Diego won first prize for his video highlighting the need to better understand fin whales that forage along the coast of British Columbia.  NSF says the winning videos will be posted online later today here. 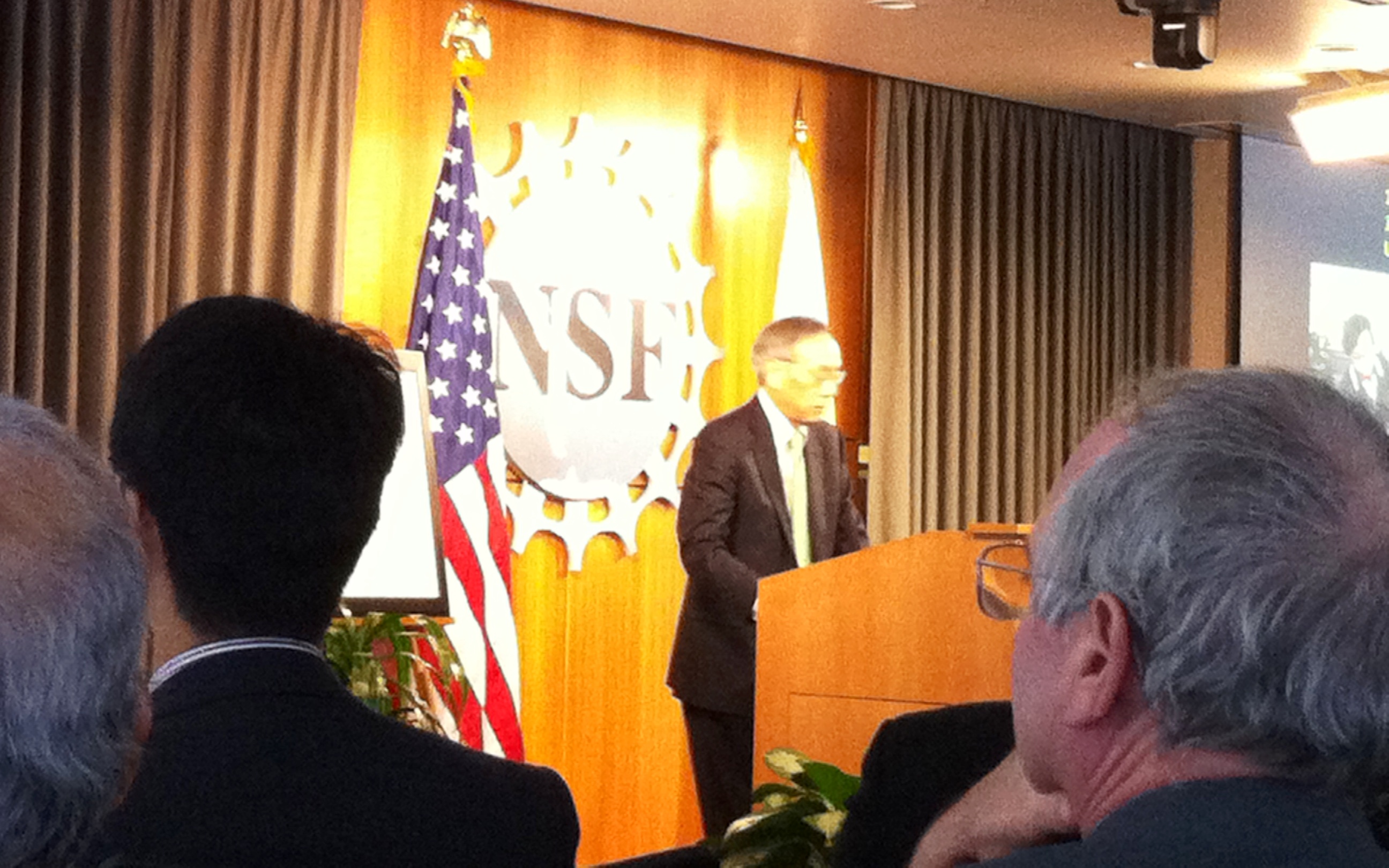 Secretary Chu at the 60th anniversary celebration of the GRFP. Credit: N. Lymn

The afternoon celebration also included short vignettes by former graduate research fellows including Energy Secretary Chu and University of Chicago President Robert Zimmer.  Chu, who received over $6 million in support from NSF over the course of his career (with a nine year break when he was at Bell Labs) credited NSF’s GRFP with enabling him to mentor a myriad of stellar students over the years.  Zimmer emphasized the independence he was afforded by the fellowship, the freedom to explore and engage in broad experiences that served him well as both a mathematician and now as president of a university.

NSF Director Subra Suresh announced that the agency is expanding the GRFP to include opportunities for graduate research fellows to collaborate with overseas research sites for part of their fellowship term.  Recognizing the increasing importance of international research collaborations, GROW (Graduate Research Opportunities Worldwide) is being launched with eight inaugural countries, among them, Denmark, Sweden, Singapore, France and Japan.

Underscoring the high value the agency places on its signature program, Suresh said that in 2013—in spite of a likely tight budget—NSF will again support 2,000 graduate research fellows.