Better a John than a Jennifer

The study asked scientists to evaluate resumes that differed only in gender. Similar studies in other professions have uncovered preference for men over women, or preference for traditionally white names over African American-sounding names. But many scientists have believed themselves immune to unconscious discrimination. The prevailing argument is that women enter STEM fields at lower rates because they aren’t interested in science and math. Women fail to thrive, or drop out of the tenure race, by choice. Family needs or other interests take priority over career ambition.

The first step in changing behavior is convincing scientists that bias is real. As Shirley [Tilghman, President of Princeton University] said, the result is not new, but we decided to conduct the experiment because scientists often respond to data from other fields with “we don’t do that because we are objective scientists.” So we thought it important to determine whether they were right.

Corinne Moss-Racusin and colleagues at Yale University sent a simple resume to 127 biologists, chemists, and physicists at six universities across the US. the study group included men and women in proportion to gender presence in their fields, and represented a range of ages and academic stature.

The resumes were all identical – except that half identified a man named John (with male pronouns throughout) and half indicated a woman, Jennifer. They described a student with strong GRE scores and two publications under his/her belt. A student who had had a rocky start in college, but caught fire in the last couple of years – a strong, but imperfect, candidate for a career in research. The resumes arrived with a cover story asking for faculty help in uncovering the qualities that make undergraduates competitive for 2-year lab manager positions. Copies of the resume and cover letter are displayed in the supplementary materials.

The evaluating faculty were told that the resumes represented real students, on the verge of graduating with a BS in their fields, who planned to apply to doctoral programs, and who had applied for real jobs. The letter indicated a pool of students of varying quality. It asked faculty to be as honest and straight-forward as possible with their feedback so that the students could learn from it as part of a mentoring project. 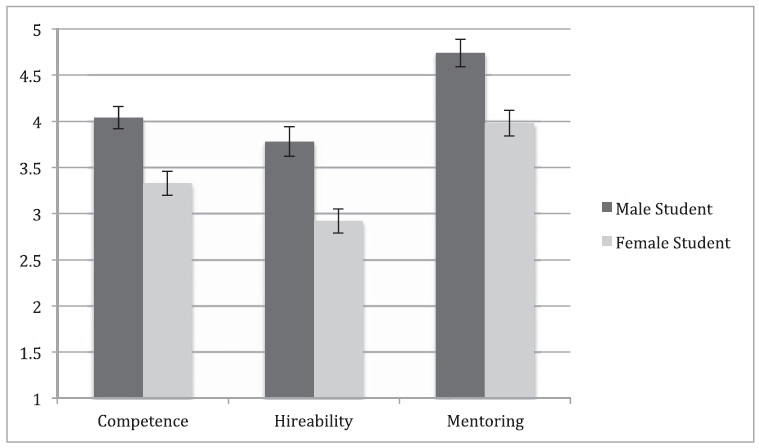 The penalty for being female was not huge, unless you consider the difference between $30,238 per year and $26,508 per year huge. But it was consistent. The authors comment that the shortfall in enthusiasm and support comes at a time when students are deciding on career paths. Their sense of self-confidence and competance, shaped in part by the opinions of mentors, informs their decisions and persistence.

The bias appears to be unconscious. Evaluating faculty attributed their lower scores for young women to a perception of lower competence. Questions designed to turn up overt sexism found none. Bias did not depend on the field, age, tenure status, or – most importantly – gender of the evaluator. Female faculty, as a group, favored male applicants in much the same way as their male colleagues. The results are simple, straight-forward, and not easily explained away.

But people have tried.

A New York Times story drew 500 comments, with quite a few arguing that the study more likely showed a preference for the name “John” over “Jennifer” than men over women (most commenters added: “and in my experience…” because it’s impossible for humans not to hold a study up to the scrutiny of their own experience.) The reporter popped into the comments to note that the Yale researchers addressed the possibility of name favoritism. They chose “John” and “Jennifer” based on previous research showing the names to be “equivalent in likability and recognizeability.” 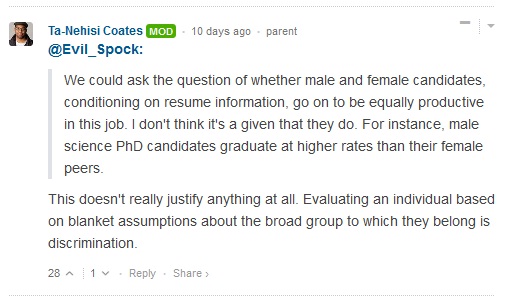 In the science blogs, commenters divided between “I’m not surprised” and assertions that it’s okay to act on stereotypes if the stereotypes are true. Some wrote that women are biologically less competent at technical work than men, therefore the identical resumes are meaningless as indicators of future success. Others wrote that women are less valuable workers than men, because “women get pregnant.” Given the current furor over Yahoo CEO Marissa Mayer’s return to work within days (if not hours) of childbirth, pregnancy, even the specter of it, is a very real road block for women’s careers.

Individuals bent on skeptical hypotheses managed to hijack the conversation, even as they underlined the study results. There was a great deal of arguing against data from personal experience, and a great many angry ripostes. Much energy was expended in fighting over the conclusions of the study, and very little in soul-searching, or brain-storming solutions.

When I mentioned the results to an engineer, a young, aggressive manager at a large firm, the immediate response was practical, and personal: do I do this — evaluate women job applicants more critically? Why does it happen? How do hiring managers describe the applicant’s qualifications differently when they believe they are looking at a woman vs. a man? How can I avoid this in my hiring practice? She was disturbed. The problem was not hypothetical.

If scientific objectivity doesn’t insulate us from our unconscious preconceptions, what can we do?

( 3:27) Comment From Alyssa: To get past gender bias musicians had to create blind auditions. Are any institutions considering creating blind job applications?

Jo Handelsman: Alyssa, I’ve heard many discussions of blind applications and many scientists think it would be difficult to disguise a person’s gender because there are so many elements of a person’s record that display gender. I believe it is something worth attempting. Even more important, in my opinion, is conducting blind review of grants and papers. One journal tried blind reviews for 6 months and observed an increased rate of acceptance of papers by women [that journal was Behavioral Ecology –ed.]. Some of the highest profile journals use a two-stage review in which editors make a decision about whether to send a paper out for review. This is based on a much more superficial reading of the paper than is typical of a regular review. We know from a lot of research that people apply more bias in decision making when they have less information, so I think this type of quick review is the most prone to “gut level” decisions, which are colored by bias. Science, Nature, PNAS, and Cell (some of the most influential journals in my field and many others) might want to think about blind review at the first stage review.

Shirley Tilghman, a molecular biologist and the first woman president of Princeton, added that women may be making better progress in science than other under-represented groups.

To Ruth (2:42) – The interesting thing about your question is that the NIH has analyzed the success rate of men and women, and they find no difference whatsoever. So once a woman gets to the career stage of applying for an NIH grant, she is treated equally. The bias that Jo and her colleagues have uncovered happens before this career stage. BY the way, the same is not true of under-represented minorities. a recent study by Donna Ginther and her colleagues demonstrated significant differences in NIH success rate of URM and others.

So ecologists: does this study worry you? Do you plan to modify your hiring methods?