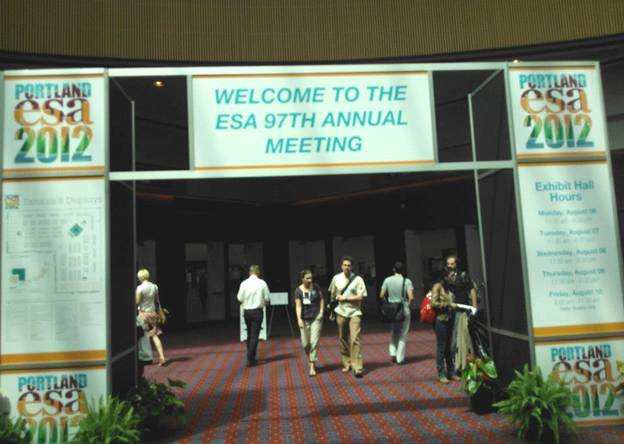 During the Ecological Society America’s (ESA) 2012 annual meeting in Portland, an organized oral session showcased several programs and initiatives that work to expand ecological education and job opportunities for the nation’s underrepresented minorities.  During the session “Increasing Representation of Minorities in Ecology: What Works?” attendees heard from professors, students, federal agency and staff from the Ecological Society of America on programs that successfully engage minority groups in the field of ecology.

Deborah Goldberg, from the University of Michigan’s Department of Ecology and Evolutionary Biology (EEB), talked about the work her university is doing to increase recruitment and retention of a more diverse student body. This work includes the Frontiers Masters Program, a National Science Foundation (NSF) initiative that seeks to bring graduate students into the field of ecology and evolution who might not otherwise consider it. Since the program’s inception in 2008, several students have moved on to EEB’s doctoral program.

William Van Lopik of the College of the Menominee Nation in Keshena, Wisconsin discussed the role US tribal colleges–attended primarily by Native American students–play in providing a unique research perspective to the broader ecological community.

Several speakers, including Talia Young with Rutgers University and Luben Dimov with Alabama A&M University noted the importance of mentoring. Dimov also discussed his research on the success of NSF’s Undergraduate Research and Mentoring in the Biological Sciences program. Young noted how 21st Century social media communications, including cell phone texting and Facebook have played a key role in helping her to stay in touch with the high school students she mentors.

Teresa Mourad, Director of ESA’s Diversity and Education Programs, and Melissa Armstrong of Northern Arizona University, discussed ESA’s Strategies for Ecology Education, Diversity and Sustainability (SEEDS) program, which, among its many activities, has provided ecological field trips and undergraduate research fellowships to promote student participation and engagement with the broader ecological community. SEEDS’s achievements have been recognized at the national level as the program was the 2006 recipient of the Presidential Award for Excellence in Science, Mathematics, and Engineering Mentoring.

Jeramie Strickland discussed how his participation in SEEDS and other diversity programs eventually helped him land his current position as a wildlife biologist with the US Fish and Wildlife Service. Strickland also mentors with the Minorities Striving and Pursuing Higher Degrees of Success in Earth System Science program and the Turtle Camp Research and Education in Ecology program, which receives support from ESA and NSF.

During the Q & A portion of the session, one audience member asked whether ESA would be better served to invest in students who are already the “best and the brightest.” Several of the speakers responded by noting that many students who have participated in these programs, while they may not have entered as top-tier students, blossomed dramatically to a level of success and personal growth that likely would not have been achieved without such opportunities, enabling them to make valuable and unique scientific contributions through their work.