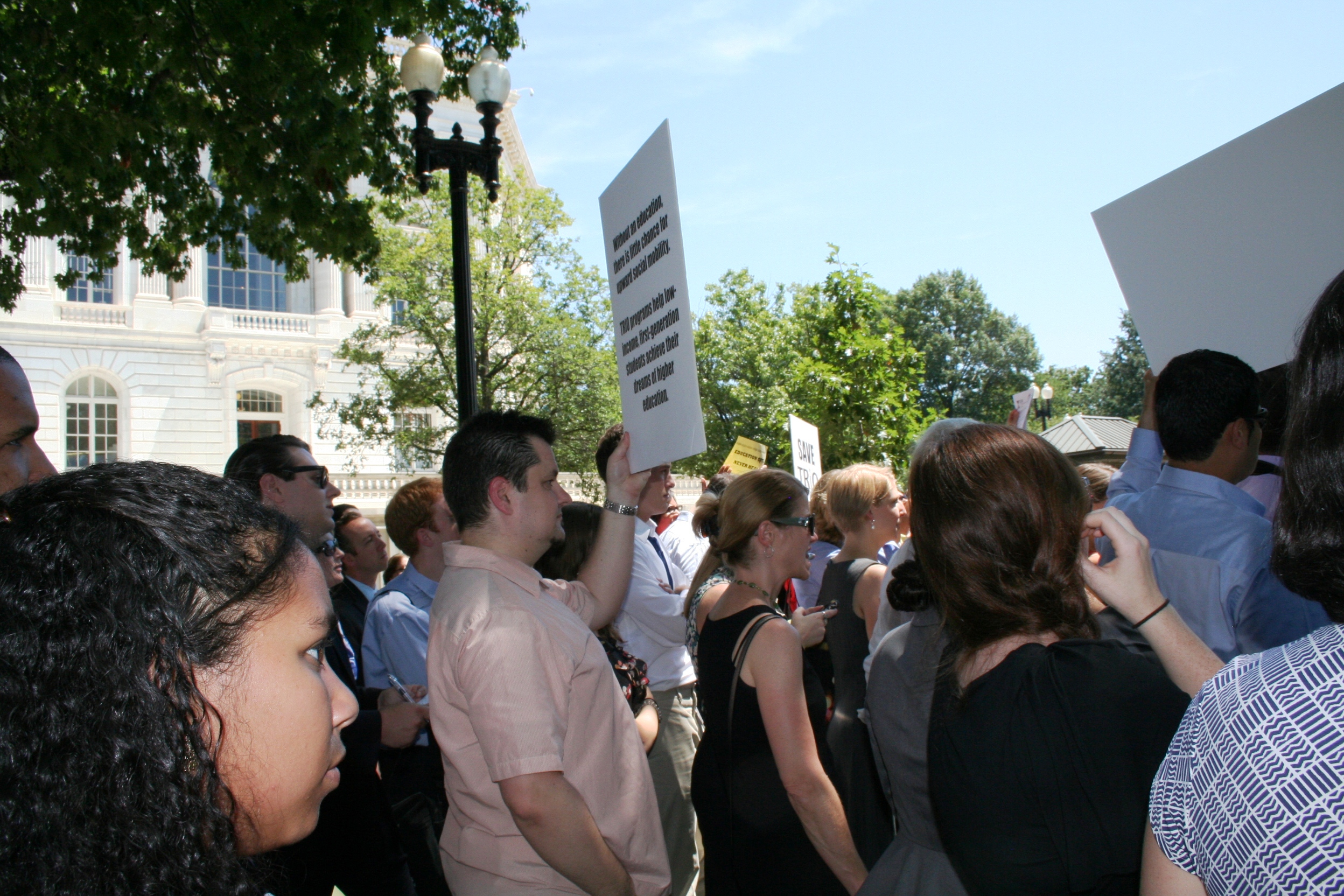 Yesterday afternoon, several hundred individuals from organizations representing education, science, and other communities that make up the non-defense discretionary (NDD) part of the federal budget held a rally on Capitol Hill.  Their objective: to raise awareness that unless Congress takes action, across-the-board federal spending cuts are slated to go into effect on January 2, 2013 as mandated by the Budget Control Act (P.L. 112-25). 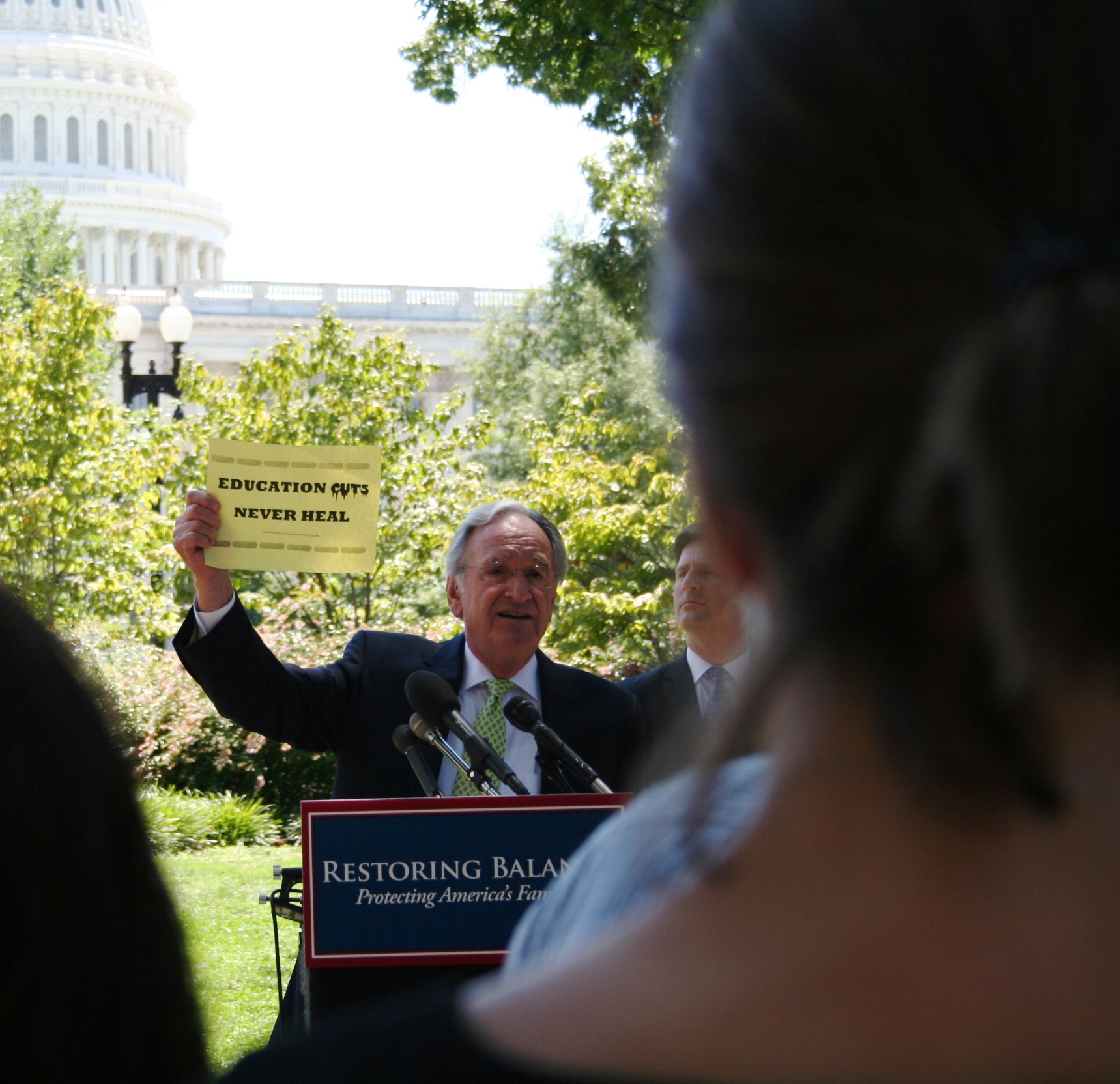 Speakers called for both political parties to come together and focus on a consensus bipartisan solution towards bringing down the national debt. Senator Tom Harkin (photo on right), who chairs the Labor, Health and Human Services, Education and Related Agencies Appropriations Subcommittee, asserted that it is “time to restore balance to the conversation.”

The Bipartisan Policy Center (BPC) projects that implementation of these cuts, also referred to as sequestration, could lead to the loss of over one million jobs in the United States between 2013 and 2014. In its report entitled “Indefensible: The Sequester’s Mechanics and Adverse Effects on National and Economic Security,” BPC notes that even if implemented, the sequester will ultimately prove ineffective in the long run, delaying by only two years the date when publicly- held United States debt surpasses 100 percent of the nation’s gross domestic product.

“Our unsustainable fiscal situation is driven by health care inflation, the retirement of the baby boomers, and an inefficient tax code that raises too little revenue,” the report notes. “Yet the sequester does nothing to address these problems, instead cutting almost exclusively from defense and non-defense discretionary spending, which are already projected to decline substantially as a percentage of the economy over the coming decade.”

Consequently, instead of functioning as a meaningful debt reduction, the sequestration will take a machete to vital discretionary programs including cuts to scientific research ($1.1 billion), special education ($1.1 billion), air transportation security and traffic control ($1.6 billion), disaster relief ($0.7 billion) and disease control ($0.5 billion) with negligible long-term benefits and very significant immediate consequences for Americans. The BPC report reinforces the reality that meaningful deficit reduction must include a focus on revenue reforms and mandatory spending programs as initially suggested by the National Commission on Fiscal Responsibility and Reform, commonly known as the Simpson-Bowles deficit reduction effort. 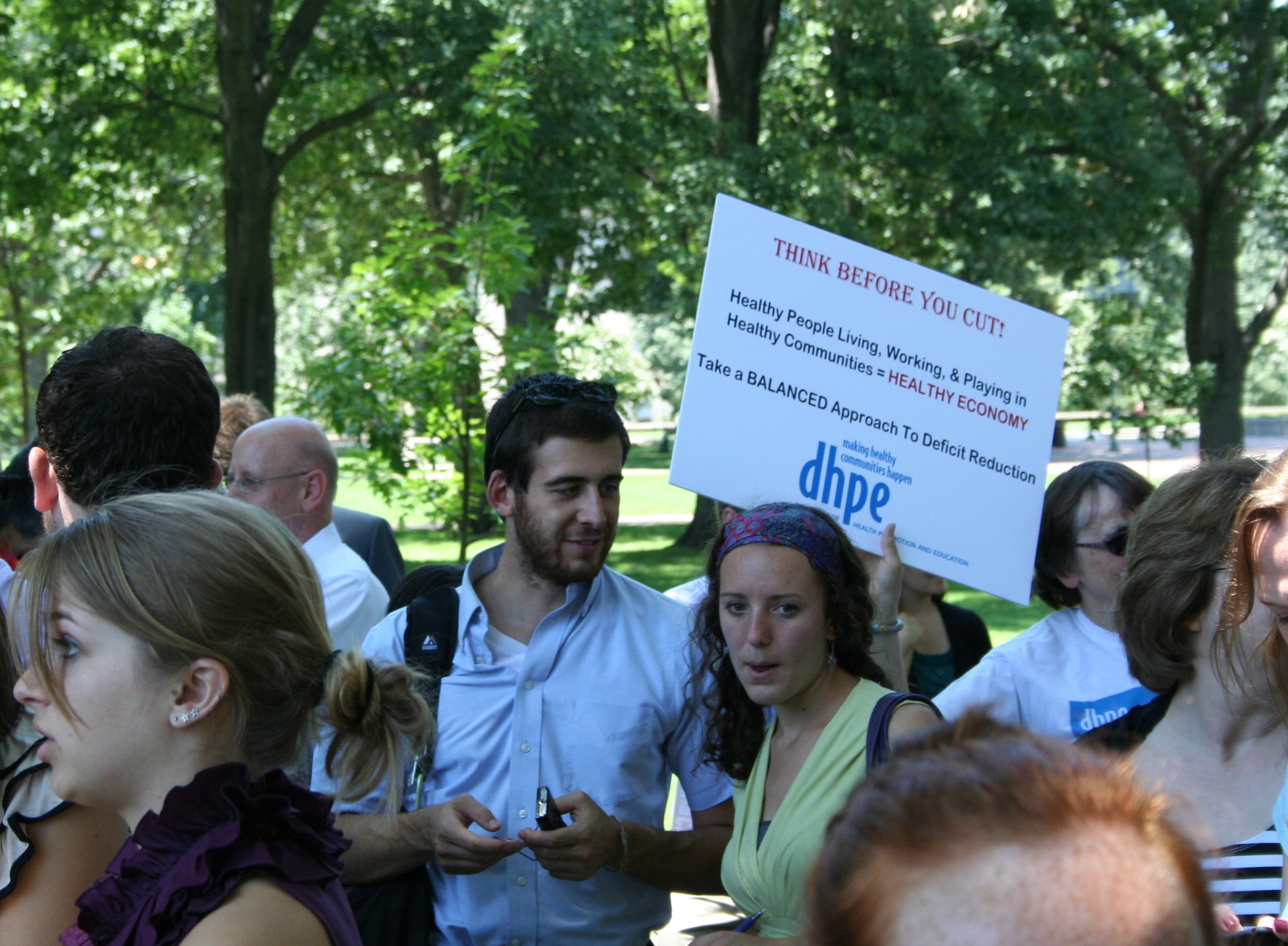 The rally was organized by the NDD Summit, which consists of 60 delegates representing a broad swath of federal interests including healthcare, education, science and infrastructure.   Earlier this month, some 3,000 organizations, including the Ecological Society of America, sent a letter to Congress urging action to avoid sequestration and calling for a balanced approach to dealing with the nation’s deficit problem:

“The NDD budget represented just 3.4 percent of our country’s Gross Domestic Product (GDP) in 2011, consistent with historical levels. Under the bi-partisan Budget Control Act, by 2021 NDD funding will decline to just 2.5 percent of GDP, the lowest level in at least 50 years.  NDD programs are not the reason behind our growing debt. In fact, even completely eliminating all NDD programs would still not balance the budget. Yet NDD programs have borne the brunt of deficit reduction efforts.”