AFTER co-authoring a 2005 paper imagining “Re-wilding  North America” with giant Bolson tortoises, camels, horses, cheetahs, elephants and lions, Harry Greene received a lot of hate mail. Corresponding ecologists hated the idea of deliberate transcontinental introductions of any kind. The plan smacked of impractical, dangerous, hubris and many ecologists didn’t buy African elephants and Asian camels as suitable stand-ins for their large North American cousins of 13,000 years ago. They didn’t see why recreating the Pleistocene communities predating human arrival should be a goal at all. For his part, Greene would like to know why the wilderness of 1492 is sacrosanct.

But the killer criticism, Greene said, is that “if people won’t tolerate wolves and grizzlies, they surely won’t tolerate elephants and lions.” We have outsourced the risks of large predators to developing nations, he told the scientists gathered for ESA’s conference on Emerging Issues last February.” This is what I call ‘no lions in my backyard’. We want Tanzanians to pay the price of continuing to have lions on earth.”

Some of his fellow conference-goers were heard to mutter, I’m sorry Harry, but I don’t want a lion in my backyard.

People don’t want the smaller, shyer North American mountain lions in their backyards either. As cougars reclaim the hills and mountains of the American West, they wander into the expanding bedroom communities of Seattle, Sacramento, Phoenix and Los Angeles. Scary news stories result. Big predators won’t stay inbounds of parks and wilderness areas, and so are bound to encounter human homes, farms and rangelands.

The successful reintroduction of wolves and grizzlies in Yellowstone National Park has come with a significant backlash from local communities – a combination concerns about the safety of people and livestock, the preservation of elk and deer herds, and ingrained cultural antipathy to dangerous competitors. Calls for ending federal Endangered Species protections these big predators have been increasing in volume.

In the Great Lakes region, the United State Fish and Wildlife Service (USF&W) removed the grey wolf from Endangered Species Act protection last January. The comment period for delisting the wolf in Wyoming ends tomorrow, May 16th. USF&W delisted Yellowstone area grizzly bears (aka American Brown Bears) in 2007, but a federal district court reinstated the bears in 2009 after challenges from the Greater Yellowstone Coalition, and the reinstatement held up in appeals in the Fall of 2011. The delisting is stayed for the next two years, while wildlife biologists study changes in grizzly food sources (particularly the whitebark pine, dwindling under a beetle epidemic).

Bear-human relations suffered a setback in 2011 after two deadly encounters in Yellowstone, the first fatal maulings in the park since 1986.  A female bear was implicated in both deaths. Park managers gave her the benefit of the doubt in the first incident, assuming she acted to defend her cubs. After traces of her presence were found on the second victim, whose ravaged body showed signs of having been cached for later consumption, they grew nervous. No one is sure if bears become habituated to humans as prey – and no one wants to do the experiment to find out. They killed the bear and shipped her cubs off to Grizzly & Wolf Discovery Center, a non-profit in West Yellowstone, Montana.

Jessica Grose chronicled the 2011 deaths in a long feature for Slate Magazine, framing the story as a judicial proceeding, with witnesses, crime scene investigations, and a trial, of sorts. Park officials take an unusually understanding view of bear behavior, declining to kill them for acting out their bear natures. The case hinged on deciding what kinds of human encounters are “natural” for a grizzly bear. Defending cubs is seen as natural, understandable, defensible. Stalking humans for food is not.

Not everyone is comfortable with bears behaving naturally. Some Rockies residents don’t see why they should have to learn to live with old enemies, and would rather see the wilderness defanged.

“When you work in Africa and you get out of a van, you’re always wary, and you’re sometimes terrified. It’s not something we typically have to put up with here,” said Greene. Persuading Americans to embrace that thrill may be rather an uphill battle. 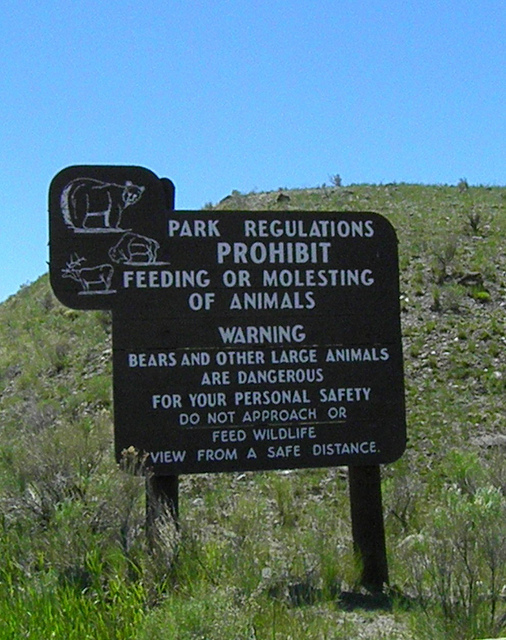