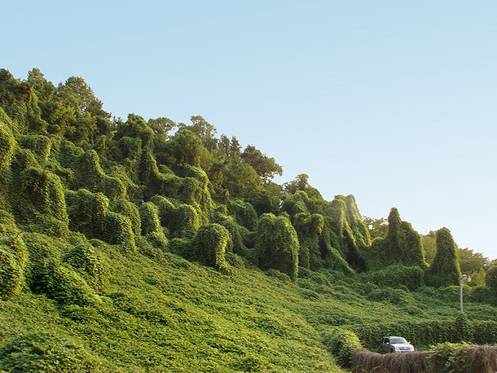 Many invasive species can have a domino effect of throwing an entire ecosystem off balance by diminishing native plant or animal species that function as an important resource for both natural ecosystems and human communities. According to the Nature Conservancy, the estimated damage from invasive species worldwide totals over $1.4 trillion, five percent of the global economy.

Invasive species that have gained notoriety in the United States include the Burmese python, Asian carp, Northern snakehead fish,Asian tiger mosquito, emerald ash borer and  brown marmorated stink bug. Non-native  invasives from the plant kingdom can be just as damaging, if not more so. Invasive plant species have the ability to reduce the amounts of light, water, nutrients and space available to native species in an ecosystem. Their ability to affecthydrological patterns, soil chemistry, soil erosion and fire frequency can also have disastrous economic consequences for human society, particularly the agricultural industry.

Federal management of invasive species is primarily handled by the United States Department of Agriculture along with the National Park Service.  According to the U.S. Forest Service, invasive exotic plants constitute eight to 47 percent of the total flora of most states in the nation. Of the approximately 4,500 exotic species currently in the U.S., at least 15 percent cause severe harm. Examples of the detriments of invasive plants include alteration of food webs, degradation on wildlife habitat, changes of fire and hydrological regimes and increases in erosion rates. The Forest Service estimates that the United States spends approximately $145 million annually in its attempt to control non-native invasive plants.

In a recent edition of the Ecologist Goes to Washington podcast, ESA Graduate Student Policy Award winner Sara Kuebbing discusses her work on invasive plant species at the University of Tennessee in Knoxville. In addition, Kuebbing serves on the Tennessee Exotic Pest Plant

Council (TN-EPPC). Her work has included some of the most problematic invasive plant species in the state of Tennessee and the greater United States. During the podcast, Sara touches on her research and efforts by TN-EPPC and affiliated state entities to educate communities on invasive plant species and manage both existing and potential threat species.

Perhaps among the most renowned invasive plant species is kudzu, which currently inhabits 30 states and the District of Columbia. According to scientific studies, kudzu’s nationwide invasion costs about $100-500 million per year in forest productivity loss. Kudzu can grow on top of structures and even other plants, including trees, basically suffocating them by obstructing their access to light and other necessary resources.  Power companies spend about $1.5 million annually to control the invasive plant, due to its structural versatility.

Among the early detection species Kuebbing mentions in the podcast is cogongrass, native to the eastern continents of Asia and Australia. It has established itself in Georgia and nearby southern states and is currently listed on the federal noxious weed list, which prohibits new planting. Cogongrass is particularly resilient due to its ability to flourish in many types of soil. Its resiliency allows it to overtake populations of native plants that provide multi-faceted benefits to ecosystems. Cogongrass has several detrimental impacts on agriculture. It is highly flammable, increasing the risk of fire in perennial crops, plantations and forest reserves. The plant is also virtually useless as a forage crop and can actually cut the tongues of some grazing animals. Efforts by federal state and local entities to manage cogongrass outbreaks can be found here.

In 2010, the Forest Service released a document outlining its long-term strategies for invasive species research for this decade and the next. The report emphasizes the important role research and development plays in identifying the ecological and economic consequences of the spread of non-native species and effective management and prioritization of all invasive organisms. The report notes, however, that “preventing the widespread establishment of non-native species may be more cost effective than attempting to control full-blown infestations, which may not be economically feasible.” Ergo, perhaps the most cost-effective route toward managing invasive species may be ensuring adequate research is dedicated to pre-emption techniques that identify potential threat species and ascertain effective ways to prevent their establishment in critical ecosystems.