Families with young children, teenagers, older adults, teachers, and even a pair of young Army soldiers visited ESA’s booth over the weekend of April 28 and 29 at the USA Science & Engineering Festival and learned about the ecology of Washington, DC and its nearby suburbs.

Some were drawn immediately to the terrarium which housed mysterious creatures.  Never mind that they weren’t colorful or furry—children and adults alike wanted to know what was inside and some even accepted our invitation to move around the stones and moss to discover what might be hiding underneath.  Others strode up to ESA’s urban ecology game poster and wanted to know what the creature with the enormous eyes was (a jumping spider) or announced that they knew that image number four was a “roly-poly.”  Some immediately knew that the old painting depicted on our game poster was the White House but were perplexed by the creek and marsh birds they also saw in the painting.

ESA President Steward Pickett of the Cary Institute of Ecosystem Studies, George Middendorf of Howard University and two of his students and several ESA staff worked the ESA booth this past Saturday and Sunday, highlighting various aspects of the ecology taking place in urban environments.  For example, they explained that the stream flowing by the White House in the 1820s was Tiber Creek and that it is one of three streams that were buried to develop the land above and provide sewer channels below. 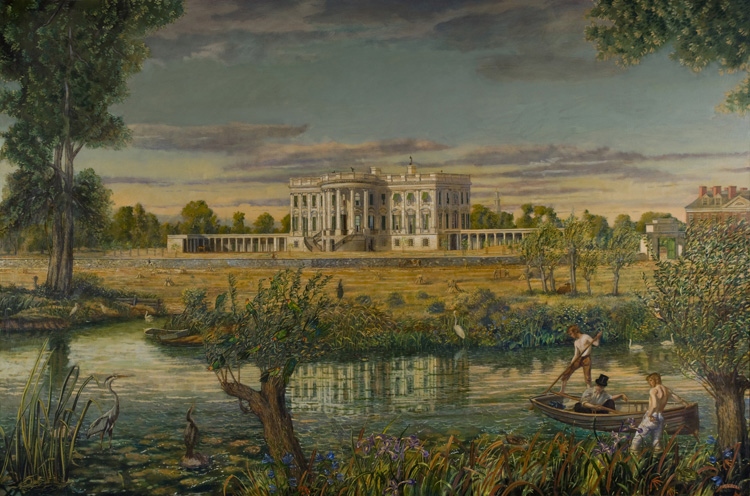 Many visitors to ESA’s booth had heard that Washington, DC had been built on a swamp.  But the real story and reason that the nation’s capital contends with flooding issues is that it lies in a floodplain, at the confluence of two rivers (Potomac and Anacostia) and atop three buried streams (Tiber Creek, James Creek, and Slash Run).  In fact, collectively, multiple federal buildings pump over a million gallons of water a day from their basements.

ESA’s terrarium inhabitants—centipedes, a spider dashing around with her eggcase, earthworms, pill-bugs and beetle were also popular with visitors.  In addition to learning about some of the small animals living in urban and suburban settings, visitors also learned that coyotes and red-tailed hawks have learned how to live in big cities, including Washington, DC.  Some mistook the coyote image for a fox or a wolf and some thought the red-tailed hawk was an owl, but they knew they were predators and were often surprised to learn that they have adapted to life in close proximity to humans.  The coyotes in Rock Creek Park, in the heart of Washington, DC, drag away deer felled by automobiles and hunt and eat squirrels and rats, while red-tailed hawks find nesting spots atop DC building structures and ample prey in the city’s numerous pigeons.

Some visitors were curious about the remote sensing image of Washington, DC that showed urban heat island effects. The cooling effect of the grass and other vegetation of the National Mall show up clearly while fiery red pockets reflect dense clusters of buildings and pavement.  Kids really got the concept when they were asked if they would rather walk barefoot on the sidewalk or on the grass on a hot summer’s day.   On hot summer nights, cities such as Washington, DC can have areas with temperatures as much as 20 degrees Fahrenheit warmer than outlying suburban locations.

Peter Mooreside, with ESA, holds up a roly-poly for visitors. Credit: Steward Pickett.

Many visitors to the booth were eager to share their own observations, particularly of hawks and coyote sightings and interesting small creatures like the pill bug—which isn’t an insect at all, but rather in the same family as crabs and lobsters, as one precocious young visitor correctly observed:  “Roly-polies are crustaceans!” The small creatures crawled gamely on the eager hands of many of young visitors.  They even stirred nostalgic memories of one young Army soldier who remembered playing with pill bugs as a kid and joked that he might like to take one with him to his barracks as a pet.