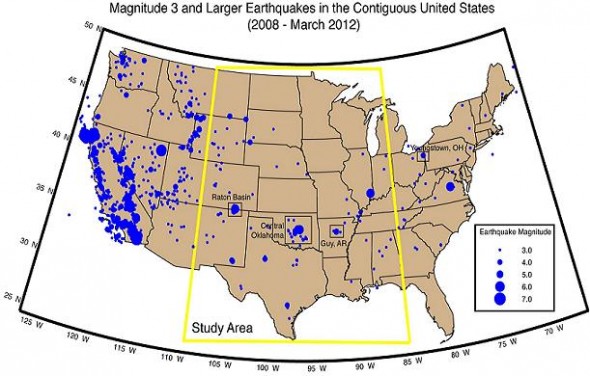 WE don’t typically think of the middle of the US as earthquake country, but small earthquakes, many just on the edge of perception, send shock waves through the prairies and southlands more than twenty times a year, on average,  and have done so since regular monitoring began circa 1970. They are becoming more common. Over the last few years, earthquakes in the magnitude 3-6 range have increased in frequency, and people are starting to notice. In 2011, 134 quakes of magnitude 3 or higher shook central North America, up from 87  in 2010 and 50 in 2009.

Earthquakes are a known hazard of deep wastewater injection wells. Geologists and engineers discovered the complication in the 1960s, when injections of contaminated water from a big surface reservoir into a 12,000 ft deep well at the Rocky Mountain Arsenal chemical munitions plant triggered a series of over 700 earthquakes in the Denver area. Not all deep injection wells trigger earthquakes, but if they are in the vicinity of a fault, the increasing fluid pressure in the pores of the rock can relieve the friction resisting slippage (strain) between the rock layers. It accelerates the timetable on a jolting slip in the fault. The effect is accentuated if fluid is pumped in fast. It takes time for the liquid to disperse and pressure to return to equilibrium (hydrostatic pressure), and in the meantime, the dynamically heightened pore pressure opposes the weight of the rock on top, “floating” it.

Surface reservoirs, flooded mines, extraction of large amounts of oil, gas or ore, and geothermal energy projects can also stimulate earthquakes. “Manmade” earthquakes, it turns out, are not a novelty at all.

Fracking is in the hot seat because the method has expanded so rapidly and successfully in the last decade. The process uses a lot of water. Ecologists have pointed out potential risks to surface water quality, and the void of empirical data on impacts. Fracking forces water (mixed with proprietary additives, some of which are fairly nasty) horizontally through shale rock to open pores, releasing natural gas.  Some 25-50 percent of the fluid returns to the surface and must be safely disposed of if it isn’t recycled. Deep injection wells are a popular solution.

Other types of oil and natural gas production also discharge waste water. Extraction of coal bed methane, which brings up plenty of water along with the gas, triggered the quakes in the Raton Basin along the Colorado-New Mexico border that Ellsworth et al. mention in their abstract.

The fracking process itself has caused a few, extremely rare, micro-earthquakes, but there is no indication that it contributes to the increased seismic activity observed by Ellsworth and his team – until fracking wastewater is injected in deeper wells, which, in a minority of cases and given the right geologic conditions, does trigger quakes.

“We need to do the basic science to address the problem,” writes Virginia Tech geologist Brian Romans on his blog Clastic Detritus. “And I don’t care if it’s advocacy for or against natural gas extraction, either loses credibility if specifics about the science are distorted, cherry-picked, or omitted. Details matter.”