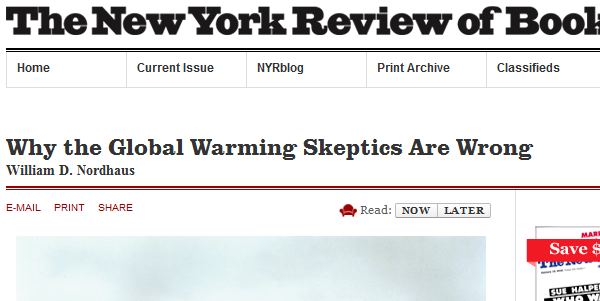 “My response is primarily designed to correct their misleading description of my own research; but it also is directed more broadly at their attempt to discredit scientists and scientific research on climate change.”

WILLIAM Nordhaus is not pulling any punches. The Yale economist and author of A Question of Balance: Weighing the Options on Global Warming Policies (Yale University Press, 2008) thinks climate change is a clear and present danger, a problem of our own making, and one we need to actively address. A January 23rd 2012 opinion piece in The Wall Street Journal signed by, as the WSJ editor takes pains to note in preface to the letter, sixteen scientists, cited his work as evidence that waiting fifty years to impose climate controls is more cost effective than intervening today. The letter has inspired over 2500 comments on the WSJ website, and numerous blog and news commentaries.

Nordhaus was not pleased. In the March 22nd (print) issue of the New York Review of Books, he responds to the sixteen scientists, point by point. He kicks off with the observation that he has wanted to cover skeptical views of climate change in his upcoming book, but found them hard to address because the source material is so wildly distributed. But here were the “standard criticisms” neatly and conveniently contained in one brief statement! He breaks down the questions thusly:

Nordhaus does not question the op-ed authors’ authority to comment on climate science, as other critics have done (most of the letter writers are not atmospheric scientists per se). He actually points out that all sixteen are established at prestigious institutions in arguing that academics skeptical of climate change are not subject to repression. Why did so many critics go after the op-ed writers’ credibility? Particularly as skeptics like to point out that science should be about being skeptical and asserting facts, not prestige?

It is probably fair to say that scientists do not like their authority on their specialty to be poo-pooed, nor do they like to be labeled charlatans defrauding the public of grant money.  Climate scientists have a reasonable desire to defend their knowledge and integrity, and strike back in kind. And in the political sphere, gaining public confidence in science does become a game of authority. Is discrediting the opposition the best strategy to pursue?