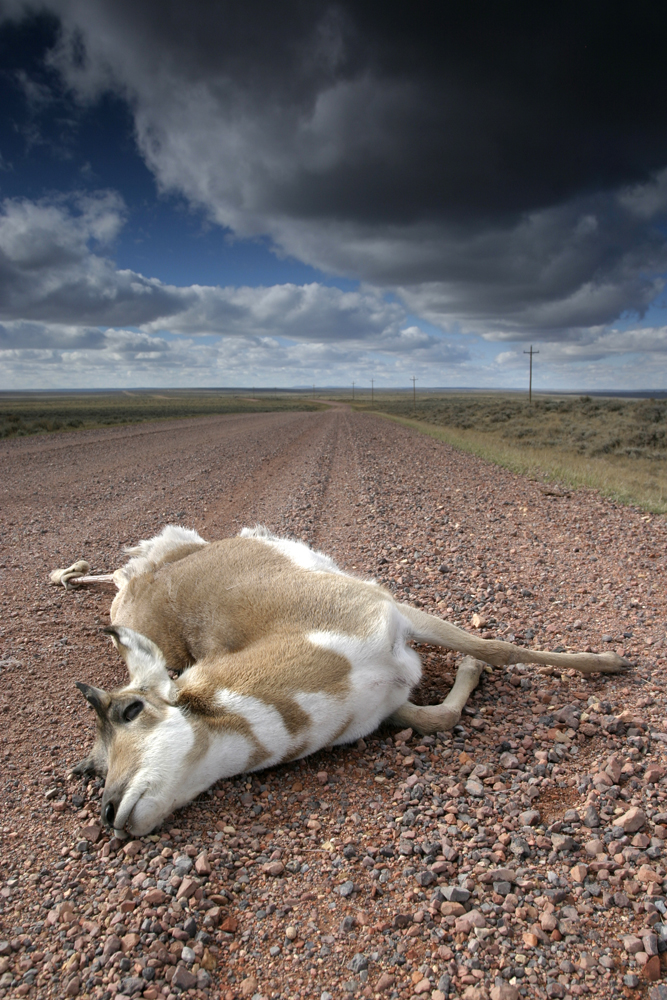 A dead pronghorn (Antilocapra americana) on a back road of the Thunder Basin National Grassland in northeastern Wyoming. Coal, oil and gas development in the basin have brought more vehicles, and more conflicts with wildlife. Rob Mutch, 2004.

FRESH water scientist (and MacArthur Fellow and member of the National Academy of Sciences) Peter Gleick was all over conservation news last week with the shocking revelation that he impersonated a board member of the libertarian Heartland Institute in a ruse to extract private documents concerning climate change strategy. The documents had been in the news for several days after arriving anonymously in the inboxes of environmental reporters and bloggers, with Heartland stating that the documents were fake and obtained fraudulently, and threatening bloggers with legal action for publicly posting them in connection with Heartland. The documents revealed the identities of anonymous Heartland supporters and included a memo outlining plans to develop materials for teaching climate change skepticism in schools. Gleick confessed in his Huffington Post column on Monday night, writing that he sought to confirm the provenance of documents that he had received anonymously. He asserted that he had not altered any of the documents that he got from Heartland. But Megan McArdle of The Atlantic has echoed bloggers’ suspicions about the credibility of the memo.

Gleick has taken a leave of absence from the presidency of the Pacific Institute, which he co-founded in 1987, and resigned from the American Geophysical Union’s task force on science ethics. Institutions are hurrying to dissociate themselves from him, and the damage is widespread. Gleick has been a major figure in science policy. Public trust in scientists and scientific institutions requires unblemished reputations, conservation columnist Andy Revkin pointed out, in grief and in anger, in his New York Times Dot Earth blog last week. Talk show hosts and anonymous hackers can pull shenanigans without damage to their message, but scientists cannot, as was amply demonstrated by the 2009 theft of private emails and files from the Climate Research Unit at the University of East Anglia.

Justice Phillip R. Rumsey of the New York State Supreme Court ruled Tuesday that state municipalities may ban oil and gas drilling within their jurisdictions under their authority to impose zoning restrictions. Such municipal interventions have been spurred by expansion of hydraulic fracturing to extract natural gas from hard to reach, “unconventional” reservoirs. The process injects high-pressure fluids into rock at depths of 5 – 20 thousand feet, creating fissures through which gas stored in the rock can escape and be collected at the surface.

At the annual meeting of the American Association for the Advancement of Science in Vancouver this month, geologists said that fracking probably does not pose a new threat to groundwater. Researchers from the University of Texas, Austin, said that stories of flammable (or otherwise contaminated) drinking water are likely to have their source nearer the surface, in sloppily maintained gas pipes and old wells, and that government agencies should think about enforcing existing regulations before inventing new ones specifically targeting fracking. Charles G. Groat, president of the Energy Institute, which put together the investigation, said that funds for the work came from the university and not commercial interests.

The growth and success of fracking in the last few years (and lower domestic demand for energy due to the recession) has dropped natural gas prices to the point that energy companies are thinking about export facilities. Energy industry pundits say that production can keep pace with demand to keep prices low. Passions are hot in the fracking debate and all conditions are set to keep the temperature rising.

Wildlife photographers are framing photos to show the conservation context beyond “pictures of pretty animals,” writes Juliet Eilperin in the Washington Post, moving from visualization of natural beauty to documentation of loss, or straight advocacy. “A lot of this is driven by worsening environmental conditions, and also the power of the internet,” wrote photographer Rob Mutch when I asked him about this new idea of conservation photography. “I can definitely understand the sentiment that there are enough pretty pictures out there. Photographers spend a lot of time and energy getting great photos and it can be frustrating to watch all our natural ecosystems continually fall apart.” But he added that the challenges of making a living in wildlife photography assure that there will always be plenty of scenic pictures as well.

Eilperin concentrates more on the travails of the coveted wilderness photographer job than the art of context. For more depth on conservation photography, watch Geographic photographer Brian Skerry talk about how to use photography to address conservation and habitat threat (and how to photograph a dead shark) at his 2010 TED talk.