In Ecology News: Python vs the Everglades 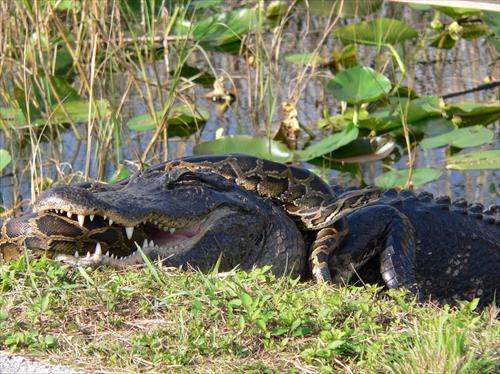 A WAXING population of Burmese pythons has suspiciously paralleled waning sightings of native critters in Florida’s Everglades, says a paper out this week in the Proceedings of the National Academy of Sciences. Following on the tail of an announcement two weeks ago (Jan 17th) that the U.S. will ban imports and interstate sales of the exotic python and three other large constrictor snakes (yellow anacondas and northern and southern African pythons), the story has been attracting plenty of media attention.

The case against the python is not a slam dunk, but the authors amass circumstantial evidence of its guilt in connection to the missing native fauna, and legislators are buying it. [See: EcoTone, 21 Sep 2011, “Deregulation of protections against invasive species can have dire long-term economic consequences.”]

Burmese pythons (Python molurus bivittatus) are native to the warm latitudes of Southeast Asia, and arrived in Florida as pets. The python has an eclectic appetite, dining on more than forty varieties of evergladian mammal, bird and reptile, including other carnivores, endangered species, and the occasional alligator. Visitors and rangers have sighted pythons in the park for thirty years, but the park only began to view them as a resident population in 2000. A short decade later, the python had risen to the disreputable distinction of “conditional reptile,” and was officially blacklisted.

Hopes that the cold winter of 2010 would kill off the pythons have been disappointed, as Terence explains in Tuesday’s EcoTone post. In July 2010, Florida Fish and Wildlife forbade acquisition of new pythons, required grandfathered owners to microchip their pets and obtain a license, and instituted a permitting system for civilian python hunting in the public parks.

The US has imported 112,000 Burmese Pythons since 1990, according to the US Fish and Wildlife Service. Owners have been known to release their sinuous darlings after the snakes, which can reach almost 20 feet, grow too large to cohabitate comfortably in the house. But park managers speculate that the 1992 category 5 storm Hurricane Andrew may be the primary source of the python population explosion. An internal Fish and Wildlife study found little genetic variation in the python population—a sign of a small, closely related foundling group.

“At least one facility had over 900 Burmese pythons at the time [Andrew struck] and was destroyed completely. This facility was within just a mile or so of what is believed to be the epicenter of the population, and it possessed animals from the same genetic origin. Since 1992 the FWC has put into place more stringent regulations on housing, disaster protocols and bio security in general,” wrote Florida herpetologist Shawn Heflick in a lengthy and interesting Q&A accompanying PBS’ Nature episode “Invasion of the Giant Pythons” in February 2010.

The python’s success in its new home has bumped it from rare feral pet to alarming invasive species in the eyes of the managers responsible for the restoration of the Everglades. They don’t know exactly how many snakes are in the park, but they know that they have been killing a lot more snakes lately.

“All of the pythons that are captured in the park are actually removed from the park, so that precludes us from doing mark-recapture studies,” said lead author Michael Dorcas, in an interview with The Atlantic’s Brian Resnick. Since park policy is to dispose of the invasive snake, the researchers do not have unassailable data on the python’s demographics. Their evidence of a population boom is a recorded surge in the number of snakes removed by rangers, which is not, as they say “corrected for effort,” or for rangers’ sensitivity to the presence of the python. Their data on the python’s prey are similarly freighted.

The park service tracked road kill (of the fuzzy variety) in the Everglades from 1993 to 1999, with more systematic surveys of encounters with wildlife, both alive and dead, along Park roads from 1996-1997, and (at different intervals) from 2003 to 2010. They don’t have truly methodical estimates of how many animals live in the swamp, or where rabbits and foxes and bobcats particularly like to hang out, but they have managed to quantify their every-day on-the-job experiences with wildlife in the park. Experience has left a strong impression of insidiously multiplying snakes coincident with the disappearance of everything else.

Between 1993 and 1999, over 250 raccoons died at the wheels of vehicles on the everglades’ sparsely used roads. In the 80s, ‘coons showed up so often in campgrounds that they were deemed a nuisance, and the park instituted unspecified control measures. Raccoon encounters have fallen by 89% since the 90s, fox by 83%, and deer by 89%. Rabbits seem to have vanished in the python high-traffic zone. The authors note that human encounters with other animals are more frequent where pythons are rare. The constellation of indirect evidence adds up strong suspicion of a python connection.

To boost their case that the rising tide of pythons is the variable responsible for the ebb in mammalian road deaths (and other encounters) the authors argue that disease and human influence are unlikely competing hypotheses. A single infectious agent is unlikely to take out such an evolutionarily broad swath of animals, and hunting in the park is already forbidden, they say.

Andrew Wyatt, president of the United States Association of Reptile Keepers was quick to point out the study’s weaknesses on NPR’s Diane Rehm Show on Wednesday. “The press and the media got quite carried away with the press release and actually reported a number of things that are not detailed in the paper at all,” he said. “In the paper, there is no direct causation linked to the Burmese python, it’s speculative. There are numerous studies out there that have been done in regards to mammal declines, and bird declines, in the Everglades that are linked back not to the Burmese python, but back to hydrology and high levels of mercury.”

Wayne Pacelle, President and C.E.O. of the Humane Society of the United States, partially proved Wyatt’s point with his rebuttal, overstating the decline in observations of mammals as direct measurements of disappearing animal populations, and ascribing the loss to Burmese pythons.

Demonstrating causation, if it is true, may be rather difficult. But what we have here is good preliminary data, a very strong itchy intuition, that something is not right in the swamp.

Watch Alligator Versus Python on PBS. See more from Nature.