Solutions for a nitrogen-soaked world

Overabundance of an essential nutrient is not always a good thing. 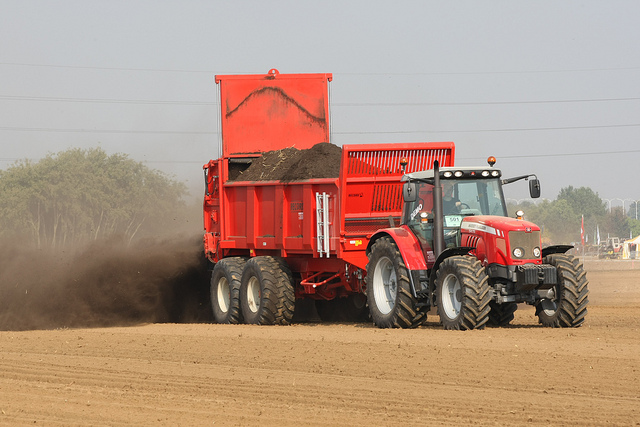 A tractor spreads manure. Excess fertilizer seeping out of fields has a host of consequences for ecological systems and human health. Credit, flickr user eutrophication&hypoxia, 2010.

NITROGEN is both an essential nutrient and a pollutant, a byproduct of fossil fuel combustion and a fertilizer that feeds billions, a benefit and a hazard, depending on form, location, and quantity. Agriculture, industry and transportation have spread nitrogen liberally around the planet, say scientists in the latest edition of ESA’s Issues in Ecology series, with complex and interrelated consequences for ecological communities and our dependence upon the resources they provide, as well as for human health.

Nitrogen is a basic component of life’s most famous molecules: proteins, RNA and DNA. Though nitrogen fills 78.1 percent of the air we breathe, energy is required to convert (or ‘’fix”) it into biologically accessible forms, a process that some species of bacteria can accomplish, but other organisms cannot. Consumers like humans, cows, birds and mosquitoes get nitrogen by eating other live things. For plants, lack of nitrogen in their immediate environment can be a serious limitation. In many ecosystems, the limit of available nitrogen is the limit of growth. We have removed that limit for our food crops by supplying them with fertilizer in the form of manure, nitrogen-“fixing” bacteria symbiotic with legumes like soybeans, and synthetic nitrogen fertilizers.

Pulling from a broad pool of expertise in air quality, agronomy, ecology, epidemiology and groundwater geochemistry, the sixteen authors track nitrogen through its different chemical forms and biological incarnations as it progresses across economic, environmental and regulatory bounds. They argue for a systematic, rather than piecemeal, approach to managing the resource and its consequences. “We’re really trying to identify solutions,” said lead author Eric Davidson, a soil ecologist and executive director of the Woods Hole Research Center. “This is a paper about how much we <em>do</em> know, not about what we don’t know. We know about nitrogen cycles, and sources, and we know problems can be addressed in economically viable ways.”

In the mid-twentieth century, widespread adoption of the Haber-Bosch industrial process for “fixing” nitrogen from the air using fossil fuels (natural gas, usually) changed agriculture in the US, and there is no going back. There are seven billion people on Earth. Without synthetic nitrogen, author Jim Galloway, a biogeochemist at the University of Virginia, estimates we could feed about four billion. “There are a variety of impacts due to the human use of nitrogen. The biggest is a positive one, in that it allows us to grow food for Americans and people in other countries, and we can lose sight of that,” he said.

But our success has delivered new problems. Excess nitrogen now overflows from fields and stockyards, typically in the forms of ammonia and nitrate, contaminating drinking water and air, and altering the chemistry and constituency of ecological communities. Combustion of fossil fuels also fixes nitrogen, in a sense, producing nitrogen oxides as byproducts.

Consequences: a bloom of toxic Microcystis aeruginosa algae in Lake Erie, fed by phosphorus and nitrogen from fertilizer runoff, as seen by Landsat-5 in October 2011. Credit, USGS, NASA.

Extra fertilizer does not benefit all species equally, and so the influx of nitrogen from human activities is changing ecosystems. Some species capitalize on the nutrient flow to crowd out others that had been successful competitors under historical conditions. Algal blooms are dramatic examples of the changes excess nitrogen can bring. The sudden growth surges of the single-celled organisms smother competing species and can create health hazards. Nitrogen also acidifies soil, leaching away other important nutrients.

“We know how to reduce nitrogen oxides from fossil fuel combustion to a very small amount. We know the science, we have the engineering, and we have the regulatory tools,” said Galloway, setting emissions aside as a political, rather than a scientific, hurdle. “On the food side, that’s where it gets interesting,” he said. “How can you still produce the food the society demands, needs, yet use less nitrogen to produce it?”

The authors believe we have many opportunities to improve efficiency without incurring major costs. Some of the inefficiency in the system is created by current agricultural patterns. Corn is grown in Iowa, and transported to North Carolina to be fed to pigs, which then go to market all over the world. Nitrogen spills out of the system from each step, in the application to the cornfield, with the exhaust of the trucks, and from the manure storage ponds.

“Under our current system, the animal operations have been isolated from our crop areas for a variety of political and regulatory reasons,” said Davidson. “The manure is a resource, it’s nutrients. It would be more efficient to recycle the manure.” But manure is wet, heavy, and mostly far away from the fields where it might be applied. Tax laws, variable environmental strictures and other incentives created the current market structure. Incentives might be able to lure production back to a mixed model.

But, though manure has advantages in build up in and slower release of nitrogen from soils, it does not have enough nitrogen to replace synthetic ammonia fertilizers, Galloway says. The report looks at options to improve nitrogen efficiency within the current agriculture landscape. The authors tabulate strategies to help farmers maximize efficient use of fertilizer, rather than just maximize crop yield, employing buffer strips and wetlands, manure management, and ideal patterns of fertilizer application. They also consider the cost of implementing the changes, and programs for buffering farmers against losses in bad years.

“Our farm system is far from free market; there are all sorts of incentives programs,” said Davidson. He would like to harness the incentive system to encourage farmers to make optimizing nutrient use a priority over maximizing crop production. The difference between the optimization and maximization, he says is mostly in the variability of conditions from year to year.

“A relatively cheap insurance policy is to put on a little extra fertilizer on the field. In most years you will get the high yield anyway,” he said. And there are other ways to insure against lost productivity. Farmers who agree to plant a soil-enriching winter cover crop could qualify for low interest loans, or those who modify fertilizer applications could receive a price guarantee on their crop. Davidson thinks we have options that could bring big benefits for air quality, water quality, and ecosystem services at a small cost to total yield. Balancing inexpensive abundant food against the damage done by nitrogen escaping into the environment is a conversation he and his colleagues would like to hear more prominently in policy arenas.

“Yes, we have to feed people, but we also need clean drinking water, clean air, and fisheries in the Gulf of Mexico,” said Davidson. “The science helps to show those tradeoffs, and where we most stand to gain from improved nutrient management in agriculture.”

Issues in Ecology #15, “Excess Nitrogen in the U.S. Environment: Trends, Risks, and Solutions,” is available as a pdf download.  Check it out to learn more about the health and climate change consequences of excess nitrogen.

All reports in the Issues in Ecology series may be found at www.esa.org/issues.