Tallgrass prairie: the invasion of the woody shrubs 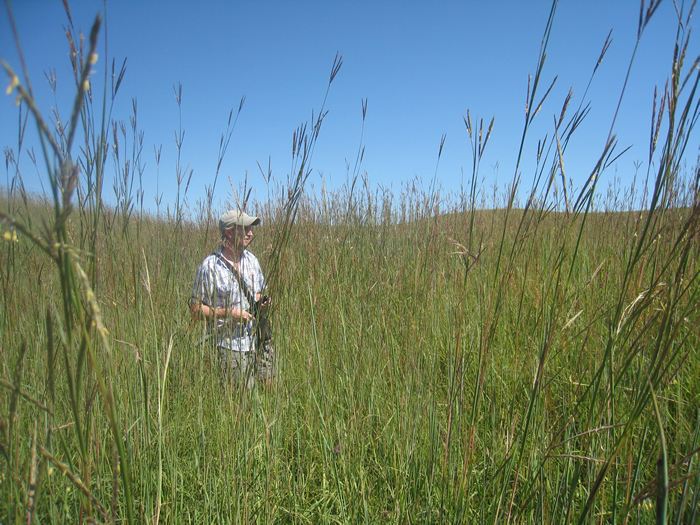 The little trees were insignificant against the grass. It seemed as if the grass were about to run over them, and over the plum patch behind the sod chicken house. As I looked about me I felt that the grass was the country, as the water is the sea. The red of the grass made all the great prairie the colour of wine stains, or of certain seaweeds when they are first washed up. And there was so much motion in it the whole country seemed somehow to be running. ~Willa Cather, My Antonia

As a Kansas boy, Jesse Nippert spent his youth wanting to escape the state, but found himself drawn inexorably back. Underlying the sea of grass is an interplay of water, fire, competition and consumption as enchanting as any ecosystem—and the balance of forces is shifting.

“Like most 18-year-olds who are from the state, when I graduated high school, all I wanted to do was to leave Kansas,” Nippert said, in an interview for today’s Field Talk podcast. He earned a Masters degree in forest ecology from the University of Idaho. “But while I was out there, I realized, man, I miss the grasses.” Though he attended graduate school at Colorado State, he chose to do his dissertation work at the Konza prairie biological research station outside of Manhattan Kansas, where he works now as an Assistant professor at Kansas State University. 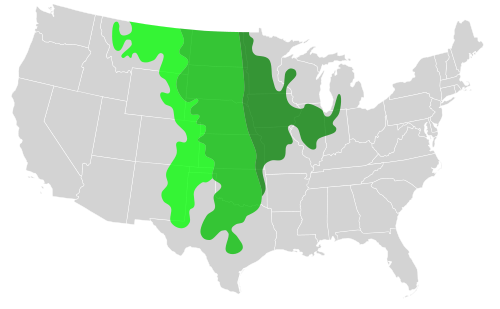 To remain a grassland, the tallgrass prairie needs periodic disruption. The constancy and stability of the tallgrass ecosystem requires an environment of upheaval and changeability. Wildfire, unpredictable rain and dry spells, and grazing animals prevent the prairie from becoming sparsely treed savanna, or dense forest. The grasses are well adapted to fire, churning hooves, and bison teeth, but saplings can’t survive long enough to become a tree. Modern human endeavors not only replace tall grass with crops, and replace bison (aka buffalo) with cattle, but stifle grass fires.

Nippert says the cattle serve much the same role as historical bison herds, and that in the Flint Hills region, most ranchers burn their land every spring to encourage the tallgrass. At Konza, long running experiments follow the consequences of no burning, ten-year burn cycles, 2-year burn cycles, and the 4-year cycles that approximate historic fire frequency.

Yet entire watersheds of the Konza reserve are morphing into scrubland.

The native roughleaf dogwood, Cornus drummundii, is gaining ground. Nippert and his students determined that, at Konza, the small tree draws water from a lower stratum of soil than the grasses, avoiding competing with the grasses for this major, limiting resource. Water is the major limiting resource in most grasslands.

The roughleaf dogwood is a clonal tree species. An established, deep-rooted individual can sprout a new trunk from its roots, at some distance from the original, and pass the new shoot water and nutrients through a shared root network—spreading without germinating fragile new saplings from seeds (though the dogwood can also produce seeds). As the tree colony ages and its trunks grow large, the land it covers offers less fuel for fires, which burn cooler and less frequently. Less fire furthers the spread of the dogwood.

Why is the roughleaf dogwood gaining an edge now, despite browsing cattle and periodic burns on par with historic bison and wildfire?

“It’s not fire suppression,” said Nippert. “It’s some other phenomenon.” He thinks the most likely explanation is rising atmospheric carbon dioxide from combustion of fossil fuels, and widespread dissemination of a important nutrient, nitrogen, from tailpipes, power plants, and industrial fertilizers. The generous release of airborne nitrogen compounds is inadvertently fertilizing large swaths of the planet. Some plant species are better equipped to take advantage of the extra fertilizer, and displace others, shaking up the ecosystem status quo.

Big and little bluestem, switchgrass and indiangrass are among the losers in this new order. These signature species of the tallgrass all belong to a relatively young (in the last 30 million years or so) evolutionary group called “C4 plants” (the system actually arose many times, independently, in different parts of the world).

“C4” names an adaptation that, under certain challenging conditions, improves the efficiency of photosynthesis, in which the plant uses the energy of sunlight to make carbon dioxide into carbon-based compounds of life—the living matter of the plant. C4 plants thrive in hot, dry climates, in low carbon dioxide, and in soils poor in the nutrient nitrogen. But there are costs to the C4 lifestyle. The C4 plants do not like cold. Their photosynthetic system takes more energy to run. As carbon dioxide concentration increases, and soils become rich with nitrogen, C4 plants lose their competitive advantage.

Most of the world’s plants are “C3” species (like 95%, though it’s worth noting that, on land, the C4 minority fixes 30% of the carbon), including the roughleaf dogwood. C3 plants are better suited to capitalize on increasing carbon dioxide and widespread, passive nitrogen fertilization of soil and water than C4 plants. So as people contribute more carbon dioxide to the atmosphere, and distribute nitrogen broadly over the American Midwest, the dogwood appears to be gaining the advantage over the tall grasses. Testing this hypothesis is one of Nippert’s current experimental directions.

Jesse working the hose during a spring burn at Konza. Credit, Ed Sturr

Shrubs are encroaching on grasslands all over the world, creating logistical problems for ranchers and herders, and environmental foreboding. In the Flint Hills, ranchers cultivate the prairie by ripping out shrubs or poisoning them with herbicides. Such intensive intervention is not economical on a large scale. But Nippert thinks talking with ranchers about their concerns for and experiences on their lands is helpful to ecological science.

“The same land has been within a family for generations and generations,” he said. “While they might not know the exact mechanisms for which plants exist there, they do have this unbelievable understanding of their land, and know, with amazing detail, what’s going to happen if you perturb it in one way or the other. To be really honest, if anyone is learning more from the other, it’s probably us from them.”