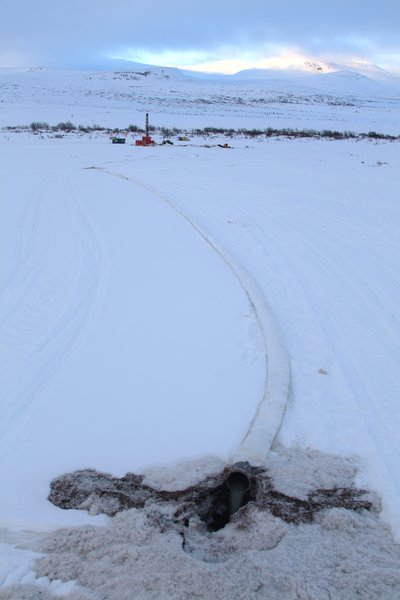 An unusual crowd converged at the recent meeting of the Arctic Division of the American Association for Science in Dillingham, AK. Over 150 locals joined the 75 meeting attendants to discuss technical and scientific questions about development of a very large copper mine in the area. The fight over the proposed Pebble Mine has been under way for much of the last decade, with passionate verbal artillery flying from both sides. John Shively, CEO of the mining conglomerate Pebble Limited Partnership, was on hand to discuss the interests of the mine. Bryce Edgmon, who represents the region in the Alaska State Legislature, described the pro-mining atmosphere in Juneau. With oil revenues declining, state government is looking to mining to fill the gap.

The Pebble claim sits at the headwaters of two major salmon spawning rivers, the Nushagak and Kvichak, which flow into Bristol Bay, the largest and most profitable salmon fishery in the world. The mining company promises unprecedented technological feats to secure mine tailings and contain dangerous, contaminated water behind dams up to 740 feet high. But members of the half-billion a year salmon industry are worried. The sport fishing industry, environmental organizations, and Alaska Native groups reliant on subsistence fishing have joined them in resisting exploitation of the deposit.

Pebble has the potential to become one of the largest mines in the world, holding an estimated 80.6 billion pounds of copper and smaller amounts of gold, molybdenum, silver, rhenium and palladium worth 300-500 billion dollars. The ore also contains sulfides, which will be exposed to the elements by the digging and crushing of the mining process. Without stringent mitigation, sulfuric acid drainage from the mine will profoundly change the chemistry of the watershed. Pebble Partnership is cagy about its exact plans for the site, but it is likely that the open pit mine would cover two square miles and would require an enormous amount of power from a source yet to be identified.

During the public forum, CEO Shively offered the Fraser River near Vancouver, British Columbia, as evidence that salmon and mining can coexist. Not everyone agrees. The Fraser had an unexplained record run of 36 million fish in 2010 after a decade of decline (2009’s run was below 2 million). The river hosts two copper mines, including Highland Valley, the largest copper mine in Canada, in operation since the 1970s.

Scientists say that only 5 grams of copper (about 2 pennies) in 1 million liters of water (around the volume of public swimming pool)  is enough to screw up salmon’s sense of smell and cause them problems navigating, spawning, finding food and avoiding danger. The risks of acid drainage and the spread of other toxic materials do not end with the cessation of mining activities. Waste must be managed in perpetuity, with corresponding permanent investments in monitoring and maintenance. Some Alaskans don’t want to bet their bay on it. On October 18th, area residents passed a contentious initiative to withhold permits from mines that threaten a “significant adverse impact” to salmon, by a tiny margin of 40 votes. The battle continues in the courts.

In other underground resource extraction opinion, Elizabeth Kolbert considers hydraulic fracking, the popular new kid of natural gas extraction. “Americans have never met a hydrocarbon they didn’t like,” she writes in this week’s New Yorker. Shale gas has some things to recommend it over the dirty reputation of coal, but Kolbert points out that we are likely to court our “new crush” in addition to, rather than instead of, the old standby.

At the Society for Neuroscience meeting this November, Svante Pääbo shared some of the mail he’s received since his 2010 publication of evidence of Neanderthal ancestry in non-Africans. A statistical approach to the correspondence, he said, shows a tendency of modern humans to detect said ancestry only in men (45 men wrote offering themselves as subjects; 12 women offered their husbands). Story in The Guardian.

The Missoulian notes a “Record 44 grizzly bears captured this year in Northern Continental Divide” many of them guilty of raiding chicken coups.

At Deep Sea News, blogger Para_Sight tells us what we can learn from baby turtles: the mechanics of locomotion on variable granular surfaces. One more in the eye for the basic science naysayers. And at Katherine Harmon’s Octopus Chronicles, “Land-Walking Octopus Explained!” Check in with Harmon’s blog to see the action video.

Photo: the Pebble Mine Prospect in March 2008, courtesy of Ground Truth Trekking