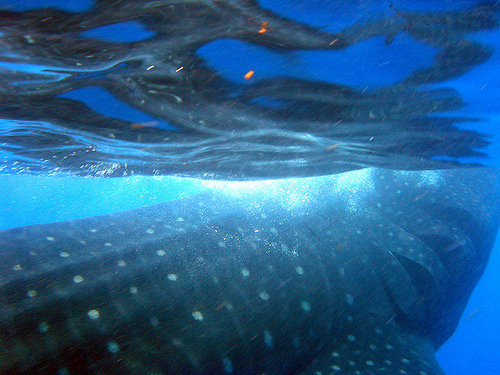 Extreme weather: The rare multi-vortex that hit Joplin, Missouri on May 22 has claimed more than 100 lives and destroyed countless homes and buildings. Unfortunately, this is not the only natural disaster to devastate the U.S. this year. According to a recent Washington Post article, this storm season is turning out to be one of the most violent on record. The extreme weather, Brian Vastag and Ed O’Keefe reported in the article, is due at least in part to La Nina: “The jet stream’s river of cool air high in the atmosphere pulls warmer, more humid air from the ground upward, forming thunderstorm ‘supercells.’ Such a pattern drove the outbreak of more than 300 tornadoes that swept from Mississippi to Tennessee in late April, killing at least 365…” But according to the Post, researchers have also been exploring the potential role of climate change in recent weather patterns. Read more at “Storm season on deadly path; Obama to visit Joplin.”

Campaigning honeybees: In the spring, beehives can reach capacity, basically overflowing with honey and bee larva. This overcrowding can cause the hive to literally burst in two, leaving half of the population in need of a new home. The old queen leads one half of the homeless pack to establish a new colony at a separate location, while a new queen takes charge of the existing hive. But where do the homeless bees go? Despite the royal title, the queen is not ruling a monarchy—worker bees actually vote for their favorite location. “The older, more experienced bees…fly off looking for options,” wrote NPR’s Robert Krulwich, and upon their return, they “announce their ‘finds’ by dancing.” That is the point when the “waggle dancing” begins (and yes, that is the official term), whereby the scouting bees use dancing to signal their sister bees. This encourages the sister bees to have a peek at the potential new home, and if they like what they see, they start doing the same dance. “This is how bees ‘vote,’” wrote Krulwich. “They dance themselves into a consensus.” Read more at “Nature’s Secret: Why Honey Bees Are Better Politicians Than Humans.”

Tracking whale sharks: “With the help of algorithms designed to guide the Hubble telescope’s starscape surveys, conservation-minded coders have designed software that helps biologists identify whale sharks by their spots,” wrote Brandon Keim in a recent Wired Science article. “The program enlists the help of citizens with cameras, and lets researchers track Earth’s biggest fish across time and oceans.” In the past, researchers have found whale sharks to be too elusive to track as the whales easily shed the plastic tags that are traditionally used by biologists, and their wide migratory range crosses international boundaries and can exceed researchers’ scope. This new approach, primarily relying on identifying whales by their spots, could greatly improve the success rate of re-encountering a tagged individual (currently at less than 1%). The principle of using algorithms to pattern individual characteristics as “permanent tags” can even be applied to other species, such as whisker patterns of polar bears and fin shapes of humpback whales. Read more at “Tracking Whale Sharks With Astronomical Algorithms” or listen to an ESA original podcast on the beginning of this research.

Migration patterns: In a study published recently in Global Ecology and Biogeography, researchers analyzed the movement patterns of four hoofed mammal species, cross referencing the tracking data with 25 years of satellite data detailing how the landscape changed seasonally and yearly. As Sarah Zielinski explained on Smithsonian’s Surprising Science blog, “Scientists have traditionally labeled species of hoofed mammals as either ‘migratory,’ meaning they travel long distances from one place to another and back again, or ‘non-migratory…’” Traditionally, conservation plans have been designed using these two categories. But in this study, scientists analyzed patterns in vegetation across each species and determined some were better labeled in a new “nomadic” category; the findings also have implications for conservation strategies. Read more at “Vegetation Determines Animal Migration Patterns.”

Ocean acidification: Researchers in Australia have discovered that corals exposed to higher CO2 atmospheric conditions, such as the conditions expected in the late-21st-century, perished in just 3 weeks. Sarah Zielinski wrote recently on Smithsonian’s Surprising Science blog, “if the ocean becomes too acidic [the coral] won’t be able to create their calcified skeletons; the chemical reaction they rely on slows down under lower pH levels.” In an experimental model, a common hard coral species and a common reef seaweed species cohabited tanks in the lab. Each tank had one of four C02 levels in the air above it, ranging from pre-industrial atmospheric CO2 levels at the low end to late-21st-century estimated levels at the high end. Though the experiment did not take into account other reef dynamics, such as plant-eating fish, it did not reveal pleasant news for the future health of coral reefs. That is, the study published in Ecology Letters indicated higher CO2 levels could also increase coral’s competition with seaweed.  Read more at “Ocean Acidification and the Battle Between Coral and Seaweed.”

Also, bioluminescence in the deep seas , a catalogue of the Davalliaceae family of epiphytic ferns, what reproductive secret led to the spiny dogfishes’ recovery from overfishing and a classification of science bloggers.

Molly Taylor earned a B.A. in Anthropology and Chinese Language and Culture from the College of William & Mary. She has served as the California Regional Program Coordinator for Jane Goodall’s Roots & Shoots, a program of the Jane Goodall Institute, and has interned with ABC news. She has also participated in archaeological and paleontological digs as well as a primatology study.