The story of the fig and its wasp 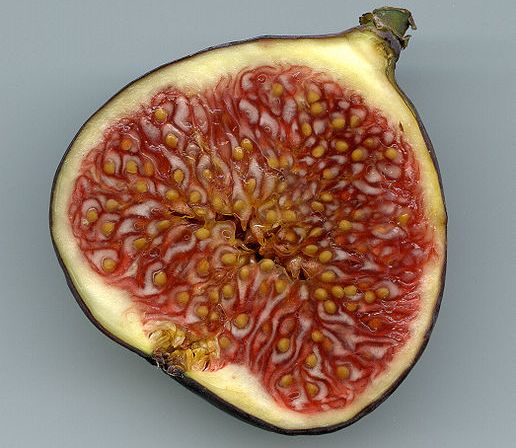 Inside the rounded fruit of a fig tree is a maze of flowers. That is, a fig is not actually a fruit; it is an inflorescence—a cluster of many flowers and seeds contained inside a bulbous stem. Because of this unusual arrangement, the seeds—technically the ovaries of the fig—require a specialized pollinator that is adapted to navigate within these confined quarters. Here begins the story of the relationship between figs and fig wasps.

The queen of the fig wasp is almost the perfect size for the job—except, despite her tiny body, she often times will lose her wings and antennae as she enters through a tight opening in the fig. “The only link the fig cavity has to the outside world is through a tiny bract-lined opening at the apex of the fig, called the ostiole, and it is by means of this passage that the pollinating fig wasp gains access to the florets,” as described in Figweb, a site by Iziko Museums of Cape Town.

Once inside, the queen travels within the chamber, depositing her eggs and simultaneously shedding the pollen she carried with her from another fig. This last task, while not the queen’s primary goal, is an important one: She is fertilizing the fig’s ovaries. After the queen has laid her eggs, she dies and is digested by the fig, providing nourishment. Once the queen’s eggs hatch, male and female wasps assume very different roles. They first mate with each other (yes, brothers and sisters), and then the females collect pollen—in some species, actively gathering it in a specialized pouch and in others, accumulating it inadvertently—while the wingless males begin carving a path to the fig’s exterior. This activity is not for their own escape but rather to create an opening for the females to exit. The females will pollinate another fig as queens. The males will spend their entire lifecycle within a single fruit.

While this tree-wasp relationship may not be common knowledge to all fig-eaters, it is well-known to biologists as one of the most solid examples of coevolution. “One of the best activities to do with an introductory biology class is to pass around Fig Newtons, let them take a bite and then tell them the story of the fig wasp life cycle,” said tropical plant ecologist Greg Goldsmith as we recently hiked through a cloud forest in Monteverde, Costa Rica. “It’s a fascinating story.”

After learning the story of the fig and its wasp, the most common question is, “Do we eat wasps when we eat figs?” The short answer is that it depends—that is, some figs are parthenocarpic, meaning they are seedless. According to a 2006 Science study, these domesticated sterile figs could be evidence of the first use of horticulture in human history. The researchers discovered carbonized fig fruits in “an early Neolithic village, located in the Lower Jordan Valley, which dates to 11,400 to 11,200 years ago”—nearly one thousand years before cereal domestication. The commercially cultivated fig tree is usually a female parthenocarpic variety of the ancient common fig (Ficus carica) and does not need pollination to produce fruit.

On the other hand, those species of fig trees that rely on wasps for pollination will likely contain bits of wasps in the fruit. In general, frugivores, like monkeys, birds and humans, are most attracted to the fruit once it ripens; at this stage, the wasps have already mated and escaped to find another fig. However, the wingless male wasps stay behind and die once they have mated and completed their tunneling duty. Therefore, animals, including humans, who eat figs that have not been commercially cultivated likely consume dead wasps.

Each species of Ficus has a corresponding specialized species of wasp that fertilizes it. Wasps that actively collect pollen in pouches have a responsibility to uphold in the mutualistic relationship. That is, scientists have found that there are consequences for the queen if she does not uphold her part in the relationship. “[I]n passively pollinated pairings, the tree almost never aborted its fruit, and the wasp always carried pollen,” according to a Cornell University press release of a recent study. “However…in actively pollinated pairings, where the wasp needs to expend energy to collect pollen, the tree dumped the fruit and killed the offspring when the wasps did not carry pollen.” In other words, if the pouched wasps did not deliver the pollen they are adapted to carry, the fig tree dropped those fruits—essentially killing the wasp eggs inside. If the fig did not get pollinated, the queen did not get the protection for her eggs inside the ripening fruit.

Greg Goldsmith was leading us—that is my boyfriend and I—to a massive strangler fig that had enveloped another tree at one point in its lifecycle. The host tree had since died and decomposed completely. In its place, the strangler fig—likely over hundreds of years old—had woven itself into a hollow, rooted cave.

The image that came to mind was paper-mache—laying gooey slabs of paper over a balloon to create a laced pattern and then popping the balloon, leaving behind a dried paper basket. The craft project takes only a couple hours, but the strangler fig’s handiwork took decades as the host tree rotted away. Standing at the impressive roots, the full size of this Ficus was hard to distinguish as it was masked within the canopy. It jutted out from the side of a large, steep hill that had been continually carved by the stream and waterfall below—the tree seemed suspended at a 45 degree angle over this sizeable ravine. The reason this particular tree’s canopy was difficult to spot is likely because it started its growth in the canopy of another tree.

While wasps are required to pollinate fig trees, seed dispersal is another matter altogether. Birds, monkeys and other animals eat the tree’s figs and then move along to perch on other trees. When the animals defecate, the seeds stay behind in the branches and germinate. The roots of the fig tree grow slowly to the ground, and once they are anchored, the tree rapidly grows in size. The fig tree competes with the host tree for soil nutrients and strangles its canopy.

This particular fig tree was just big enough to allow one person to climb to the top. There, the roots split in a way that allowed the climber to look straight down the ravine. Starting its growth in the canopy of another tree enabled this strangler fig to reach incredible heights.