Strange but true tales from botany 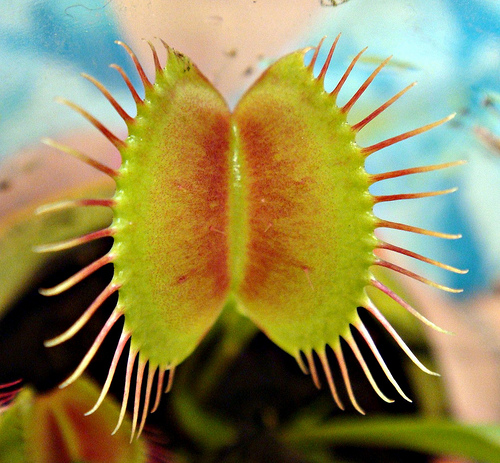 The natural world is ripe with stories more incredible than the human mind can possibly fathom. Similarly, some of the most engaging science fiction is set within the boundaries of real phenomena. For example, the tale of a human-eating plant—a legend that dates back to at least 1881, and one that has been popularized by the 1960 American film The Little Shop of Horrors—may seem more feasible after learning about the carnivorous Venus Flytrap (Dionaea muscipula). But as astonishing as a flesh-eating plant sounds, there are others with a similarly fantastic existence.

Take two species of pitcher plants on the island of Borneo that have adapted to rely on mammal feces for nutrients. Nepenthes lowii attracts mountain tree shrews (Tupaia Montana) with its sticky nectar, and a modified structure appeals to the shrew’s other physical needs.

“For instance, the rim of the pitcher is not slippery like it is in the insect-trapping [variety of pitcher plants,] such as the ground-lying, terrestrial N. lowii pitchers. That way, tree shrews stay safe from a spill while eating and pooping,” Jeanna Bryner reported on the Biology Letters study in a Live Science article. “…And there’s no way for the animals to miss the hole. The shape of the pitcher opening and orientation of the leaf lid that’s coated with nectar ensure a tree shrew will position its hindquarters over the orifice while feeding.”

Also in Borneo, a subspecies of the Nepenthes rafflesiana pitcher plant benefits from the guano of roosting bats. That is, Hardwicke’s woolly bats roost inside the pitcher plants for protection, while the plants feed on the droppings.

These pitcher plants might be shaped like and used as a toilet, but other plants lead with the most odorous aromas. Flowering plants—such as the Amorphophallus titanium, also called the “corpse flower”—are known for for their foul fragrance. That is, some species of Eucomis, or pineapple lilies, have adapted to attract flies with the scent of carrion. The flies flit from flower to flower, pollinating along the way.

Just as in science, these serendipitous encounters can lead to a whole new avenue of opportunity. And sometimes the resulting encounters are stranger than fiction.
Read more incredible botany stories at “Millions of Spiders in Pakistan Encase Entire Trees in Webs” in Wired Science, “‘Wicked Plants’ Creep Through Brooklyn Gardens” in NPR and “Punishment Important in Plant-Pollinator Relationship” in Science Daily.