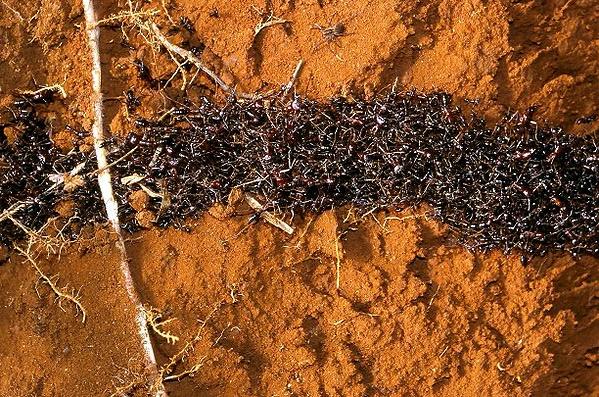 Army ant week: Biologist and photographer Alex Wild reported on army ants all last week  in a series of posts on his blog Myrmecos. In one post, he described how army ants link with one another using hooks on their feet: “When the time comes to encamp, they can string together living curtains of ants in a matter of minutes. Army ant bivouacs are made from the ants themselves, a vibrant structure that protects the vulnerable brood and maintains temperature within a single degree of optimal.” Read more or view photos at “Army Ants as Living Legos.”

Funky pheromones: Chemical signals, as ecologist and blogger Tracey Switek put it in a recent post on The Olive Tree, “don’t have to just be scents that waft through the air…They can be toxins, which send a very clear signal either because they make the plant taste bad or outright kill or injure anything that tries to eat. We’re all familiar with the culinary herbs such as basil, mint, thyme, cilantro and sage… But the real purpose of those pungent chemicals is to discourage insect predation.” Chemical signals can change the behavior of a species in many ways—for example, pheromones on squid eggs can cause males to become aggressive at the slightest touch (see above video). Read more at “Everybody Stinks: Chemical Signaling in the Undergrowth” and at “Rage-inducing chemical on squid eggs turns males into violent thugs” by Not Exactly Rocket Science.

Woody vines: Stefan Schnitzer from the University of Wisconsin in Milwaukee and colleagues gathered data on the abundance of woody vine growth in American tropical and subtropical forests, and the cascading effects they had on biodiversity and water supply. According to a recent Live Science article, “It’s possible an increase in woody vines could change the nutrient dynamics of forests, in part because of differences between their leaves and the leaves of tropical trees, all of which ultimately fertilize the forest floor.” Read more at “Twisted Tropics: Growth of Vines Imperils Ecosystem.”

Ant-mimicking spider: Michael Bok described the jumping spider, Myrmarachne plataleoides, in his blog Anthropoda. At first glance, the spider appears to be a red ant, but upon further examination, the  four pairs of legs become noticeable (see above video). “It makes up for a lack of antennae, and an overabundance of legs, by holding its forelegs up, alongside the head,” he wrote. “Its huge anterior medial eyes are colored to match the head when not viewed directly, and the posterior lateral eyes are enlarged, with darkened pigment around them to mimic an ant’s eyes. Also, the cephalothorax and abdomen are deformed and narrowed considerably.” Read more at “Monday Mimic #10 Followup.”

Love day: In honor of the romantic holiday yesterday, several sites posted articles on mating, courting and attraction in animals. Smithsonian’s Surprising Science blog, for example, featured biology’s ten worst love stories, including the redback spider: “When mating, the male redback spider performs a somersault that places his abdomen right above the female’s mouth, thus setting himself up to be eaten when copulation is done. It’s a noble sacrifice in the name of his genes—cannibalized males copulate longer and fertilize more eggs than males that survive mating, and females are more likely to reject other males after they’ve eaten their first mate.” Read more on animal mating here and here.

Also, the effects of climate change in Alaska, coral reef bleaching in Puerto Rico, call for bearded scientists in Washington, D.C., animals believed to predict the weather and a touching post on researchers who lost their lives in the pursuit of science.