This post contributed by Jason Aloisio, graduate student in biology at Fordham University. 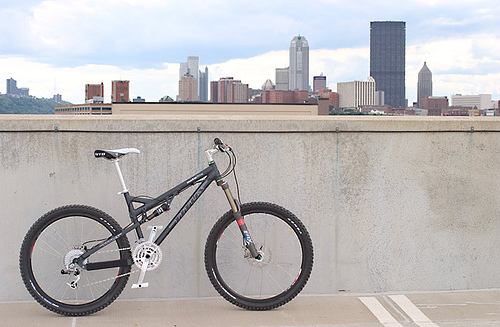 The topic of this year’s Ecological Society of America annual meeting is global warming. So it is fitting that Jason Aloisio, graduate student in biology at Fordham University, and Anthony Gizzi, graduate student in pharmacology at Thomas Jefferson University are going green—all the way to the meeting, that is. Here is their story:

It is widely accepted that the combustion of fossil fuels for transportation is one of the key contributors to anthropogenic greenhouse gas emissions. With this knowledge we have elected to forgo the comfort of carbon emitting cars in exchange for bicycles to raise awareness that bikes are feasible modes of transport—given the fact that the vast majority of car trips are fewer than three miles, a distance that many people are more than capable of riding or walking. If you would like to track our progress, you can follow us on Twitter @GO_GreenRiders or view our route on MapMyRide.

Our journey, spanning three states and four hundred miles, begins at Fordham University’s Rose Hill Campus and will conclude when we have reached the ESA Annual Meeting in Pittsburgh, PA. The trip should last from the morning of Friday, July 30 to the evening of Monday, August 2.

We share two major passions: exploring the world around us and seeking to better understand it. With this adventure we not only fuse these passions by viewing the countryside through a new perspective and gaining new insights at the ESA conference, but we also bring awareness to a global issue. By riding our bicycles to the conference, we have avoided the approximately 420 lbs of CO2 that would have been released from the tailpipe of one automobile, had we driven.

“We have been adventuring together for years and have been setting lofty goals since we first met in undergrad,” said Gizzi. “Neither of us are the type to turn back easily. In comparison to some of the other silly and less thought out adventures we have managed to finish, this seems almost like a well-planned vacation.”

Gizzi finishes at Jefferson University in August and intends to take a year off after graduate school to gain field experience. He plans to begin a Ph.D. program in 2011 in Environmental Toxicology focusing on exogenous endocrine disrupting compounds and their physiological effects on humans and wildlife.

Aloisio is beginning his second year at Fordham University where he studies green roofs through an ecological perspective. His rooftop ecology research focuses on integrating biodiversity and functionality of a green roof to maximize the effectiveness for both humans (e.g mitigate storm water runoff and urban heat island effect) and wildlife (e.g. habitat).