Sexually-mature tortoises are at greatest risk of disease 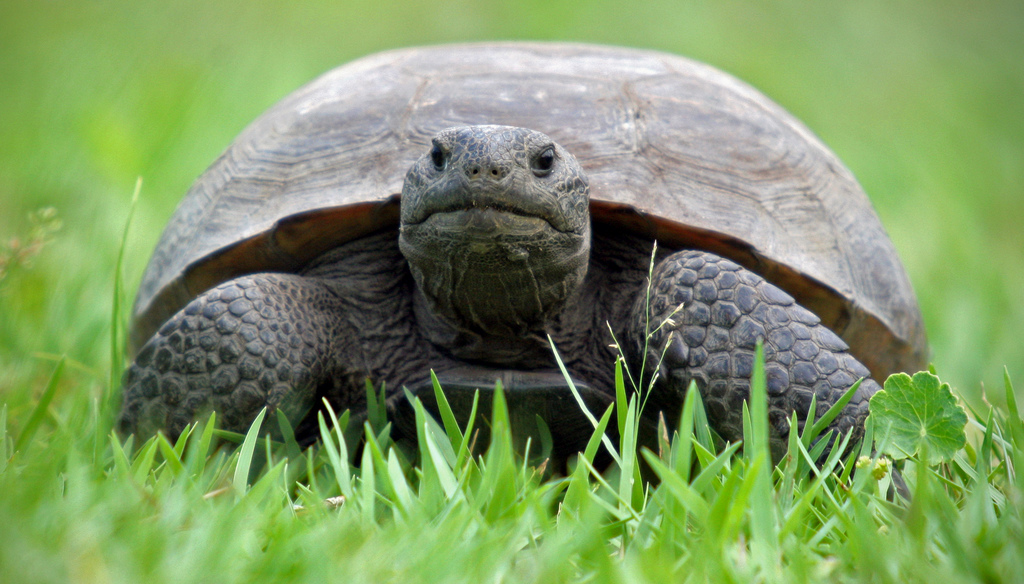 Currently, upper respiratory tract disease (URTD) and habitat loss are  contributors to a decline in gopher and desert tortoise populations. And since these reptiles are keystone species—that is, the habitats they create are home to more than 300 other species—their population decline significantly affects the ecosystem. According to a recent study in Ecology, sexually-mature male tortoises were at the greatest risk of carrying and spreading URTD due in large part to their social behavior.

Specifically, gopher tortoises may be transmitting the deadly virus to one another through mating rituals and male competition. URTD is a contagious disease found among gopher and desert tortoise populations and caused by direct contact with the bacteria Mycoplasma agassizii or M. testudineum, usually through nasal discharge and respiratory secretions. The social dynamics of gopher tortoises were examined by Lori Wendland and colleagues from the University of Florida, Gainesville to locate patterns of transmission.

The researchers sampled 11 populations of free-ranging gopher tortoises in Florida—a total of 1,667 individuals over a five year span—to compare disease contraction across age, gender, sexual maturity and habitat location. They found that adult tortoises were 11 times more likely to test positive for URTD than juveniles. These variations, said Wendland and colleagues, can be attributed to the social behavior of the gopher tortoise.

When they reach maturity, male tortoises begin competing with one another to determine social status. It appears that the greater the number of aggressive encounters with other males, the more susceptible these reptiles are to contracting URTD, among other social behaviors. Wendland and colleagues added that the tortoises’ susceptibility is likely density-dependent. A denser population of tortoises will likely increase the chances of catching URTD, not only through close proximity with other tortoises, but through frequent social encounters.

Once the males reached maturity, they mated; one possible routeto transmitting the disease to the females since the tortoises would be in colse proximity to one another. Scientists describe this dynamic as frequency-dependent—that is, a higher proportion of infected males increases susceptibility in females—a model found primarily in sexually-transmitted diseases. Therefore, sexually-mature females were also more susceptible to URTD than juvenile females since prolonged direct contact with infected males occurred through mating among other encounters.

On the other hand, practically none of the juvenile tortoises tested positive for URTD, suggesting that they were not exposed to infected tortoises. The researchers explained that this, too, is due to the social behavior of most reptiles, which take little or no part in the care or upbringing of their offspring. Without parents nurturing them, the tortoises had a greater chance of resisting the illness—at least until they reached sexual maturity.

The researchers argue that their findings could have serious implications for the conservation of threatened gopher and desert tortoises. Juveniles could be supplemented to restock depleted populations, thereby reducing the risk of pathogen introduction. Understanding disease transmission dynamics in the context of species-specific social behavior, they concluded, could inform future conservation and land management efforts.