When habitat destruction is extremely subtle

This post contributed by Rob Goldstein, editor of the blog Conservation Maven. 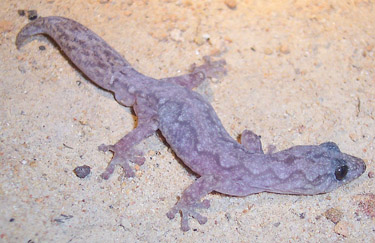 When it comes to habitat destruction, startling events like oil spills and deforestation are certain to grab the headlines. Yet as a new study in the journal Animal Conservation shows, sometimes habitat destruction can be so subtle that it passes under the eyes of all but the most astute scientists. David Pike and fellow researchers from the University of Sydney look at the case of reptiles in outcrops and find that people moving rocks less than 30 centimeters out of place can ruin the habitat for species like the endangered broad-headed snake that shelter in narrow crevices.

This impact to rocky environments is widespread across the world, particularly from reptile enthusiasts, researchers and collectors who move rocks slightly out of place to search for their favorite species. With an elaborate experimental design, Pike and his team were able to show that altering the position of rocks negatively impacts reptile habitat by modifying crevice micro-conditions that species prefer. The study also demonstrated that the impact is easily reversible by restoring the rocks to their original position.

The researchers surveyed for lizards in Morton National Park in southeastern Australia under previously disturbed and undisturbed rocks. Disturbed rocks are easily identifiable because they normally fit flush with underlying substrate (i.e. they do not wobble when pushed) and displacement usually leaves a light colored “scar.”

The researchers found that broad-headed snakes and their prey velvet geckos were much less likely to be found under disturbed rocks. The scientists also conducted a field experiment in which they found 26 pairs of previously disturbed rocks and returned  one rock from each pair to its original setting. They found  the restored rocks harbored a much greater number of reptiles,  showing that impact is easily reversible. It also provides evidence that changes in the crevice habitat itself cause the decreased reptile numbers under disturbed rocks rather than people scaring the animals or collecting them.

To understand how rock displacement alters habitat microconditions, the researchers took life-sized casts of the crevices under disturbed and restored rocks and compared the differences in surface area. They also placed data loggers in the crevices over a period of time to compare differences in microclimatic conditions.

The researchers found that restoration increased crevice surface area by 59% and raised mean daily minimum temperatures, an important condition for the survival of reptiles.

The findings from this study will hopefully raise awareness among resource managers in rocky environments to warn hikers and reptile enthusiasts in particular against displacing rocks from their original setting. As the study shows, sometimes the ideal habitat for species forms over geological time and can be destroyed in the matter of a second by an act as subtle as moving a rock a few centimeters out of place.

Rob Goldstein is the editor of Conservation Maven, an online hub for the conservation community. The site profiles the latest research and news in the field of conservation. To see this and other posts, visit http://www.conservationmaven.com/.