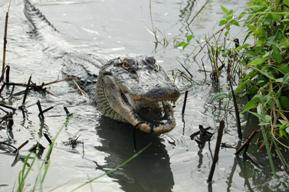 Birds are often touted as the monogamists of the animal kingdom, with most bird species mating with the same individual and displaying biparental care, sometimes for many years. Their cousins, the reptiles, are no match for their faithfulness: most reptiles show no mate fidelity, let alone parental care.

But a new study in the journal Molecular Ecology has shown that some alligators actually do display monogamous breeding. Stacey Lance and her colleagues at the Savannah River Ecology Laboratory studied eggs in alligator nests over a span of 10 years in the Louisiana Department of Wildlife and Fisheries’ Rockefeller Wildlife Refuge. They compared the offspring’s genes using a molecular technique that examines a molecular marker in the animal’s genotype. In this way, the team determined the paternity of each baby alligator.

The ecologists were surprised to find that out of 10 alligators’ nests that were studied, seven females chose to mate with the same male over the course of many years.  The open habitat and dense population of alligators in this area makes it likely that females encounter many males during the breeding season, further corroborating the idea that mating fidelity is by choice, not chance. As Lance said in a press release:

To actually find that 70 percent of our re-trapped females showed mate fidelity was really incredible. I don’t think any of us expected that the same pair of alligators that bred together in 1997 would still be breeding together in 2005 and may still be producing nests together to this day.