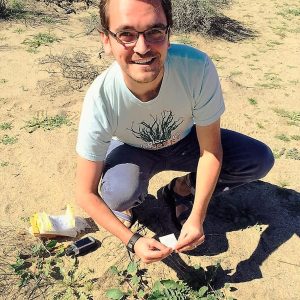 The Tubb Canyon Nature Conservancy asked Winkler to take on a project to learn what enabled Sahara mustard to adapt so successfully — and, hopefully, gain insight into how to stop it. Winkler will report his findings on August 11, at the Ecological Society of America’s 2017 Annual Meeting in Portland, Oregon.

Winkler, a Ph.D. student at the University of California, Irvine, was a recipient of a 2016 award from the Ecological Society’s Forrest Shreve Student Fund, which supplies $1,000-2,000 to support ecological research by graduate or undergraduate student members of ESA in the hot deserts of North America (Sonora, Mohave, Chihuahua, and Vizcaino). Support from the award will fund rapid “next generation” DNA sequencing to uncover unique genetic signatures for each plant. By comparing the genetic signatures, he will learn how similar plants growing across the U.S. southwest are to each other, and to populations in Sahara mustard’s native range. Identifying the source location, or locations, of the U.S. invasion, he said, could aid in finding biological control agents.

A small tortoiseshell (Aglais urticae) feeding on a cushion pink (Silene acaulis) on the slope of Hochkalter in Germany. Mountain areas are facing a twice as strong temperature increase by climate change as other areas, demanding species to adapt quickly. In their article published in the January issue of Ecology, Kerner et al. studied butterfly communities in 2009 and 2019, observing that many butterfly species, especially alpine species, moved their center of occurrence considerably upward, although their associated host plants did not move as much. In contrast, a few species like the generalist small tortoiseshell remained widespread and did not move their center of occurrence upward.