Advice for Giving a Dual-Language Presentation

I graduated with a PhD in Ecology and Evolutionary Biology from Iowa State University during May 2021. While preparing my presentation I noticed I could not find any easily accessible resources which gave advice on presenting in two languages. For this reason, I was invited to write about my experience. The goal of this piece is to give advice for others looking to do the same – present science effectively to an audience speaking two languages. I use “dual-language” because I was not just speaking in Spanish; my titles and figures were in both languages too.

Why did I choose to present in Spanish and English?

Like many other Latinx people, I struggle with using Spanish to communicate my science to my parents. I presented in both languages because I wanted my parents to feel during this special occasion that they are my primary target audience (instead of just bystanders). Giving a presentation in two languages was a challenge but it helped to develop my scientific communication skills overall. More importantly, what better milestone than a PhD defense to flip the dynamic and center my parents in my presentation? A clear consequence of this is that the English-speakers watching my presentation felt (maybe for the first time) as if their language is not the primary mode of communication: this is a common feeling in Spanish-speakers.

I knew this was going to take time. In the end, preparing the full presentation took maybe twice as much time as preparing an English-only one. My first suggestion is to start early. I speak Spanish at home, but this excludes scientific terms. This means I was forced to use primary literature to find appropriate translations for specific terms. When not possible and as suggested by Nora Moskowitz in the O’Connell lab at Stanford, we can look up jargon on Wikipedia, then switch the language to Spanish to find the word we need more easily!

Interestingly, I also had to look up accents although I knew the translation for a word. I am Mexican American and I grew up speaking both English and Spanish. Yet, I struggle with accents despite knowing the rules for placing accents on words. This does not come natural to me and is a consequence of limited opportunities in the United States for the public to write in Spanish. Furthermore, I faced the challenge of code switching. I spoke in both languages, sometimes in the same slide! Possibly the most difficult issue I faced was translating the science while presenting the material as clearly as possible to non-scientists. All these issues put together created a worthy challenge, one that I was motivated to overcome.

I used two sets of titles, one in each language. What helped the audience distinguish between these two sets of text was italics and the general suggestion of keeping titles short. For my figures, I also had two sets of axes (one in each language) and translations for figure insets. In science we use uncommon vocabulary often. For this reason, while making translations, I looked for much simpler synonyms for specific words, ones that my parents would understand. One example is taxonomy. Instead of using “Anura” throughout my talk, I used “frogs” and “ranas”. For my images, I am proud of coming up with the idea of finding Spanish versions of general figures. For example, Darwin is a key author in much of our research, therefore, I presented the cover of Origin in an introductory slide – but in Spanish. Scientists will recognize the image and book from context, Spanish-speakers are the direct audience here and this enhances their understanding. 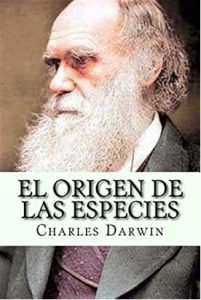 For some slides, I used only Spanish text and used English for the rest. I did this because it would be limiting to have only text i n Spanish and never connect verbally with my Spanish-speaking audience. Speaking in one language and having written text in another also helped to overcome the problem of having too many words on a slide. For this reason, I included English text in intro slides or big results slides but spoke the information out loud in Spanish. This meant I had to memorize my translations ahead of time or say the translations for the English text on the fly. Surprisingly, this was not too challenging for me since I am a master of Spanglish. If you are planning on doing this, make sure to prep your audience at the beginning of the talk.

The response I received from those at my defense was very positive. Both Spanish-speakers and English-speakers indicated having understood my research. After speaking to others, I found out dual-language presentations are common in English- and French-speaking countries! I hope this piece lets us present our science with more than a single target audience and help make science more inclusive.

I am a first-generation college graduate who grew up in Los Angeles, California. I spent a lot of my time playing in my backyard and I thrived in museums. Field trips were my favorite activity and luckily southern California has a ton of museums, aquaria, and zoos (etc.). I majored in Zoology and Geology at UC Santa Barbara, and earned advanced degrees in Ecology and Evolutionary Biology from the University of Michigan and Iowa State University. Currently, I am an NSF Postdoc in the O’Connell and Hadly labs at Stanford University. I thank my PhD Advisor, Dean Adams, in encouraging me to embrace my culture and identity while preparing my defense talk. Outside of academia, I enjoy finding salamanders, insects, other invertebrates, and playing video games. 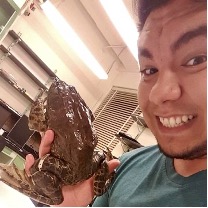