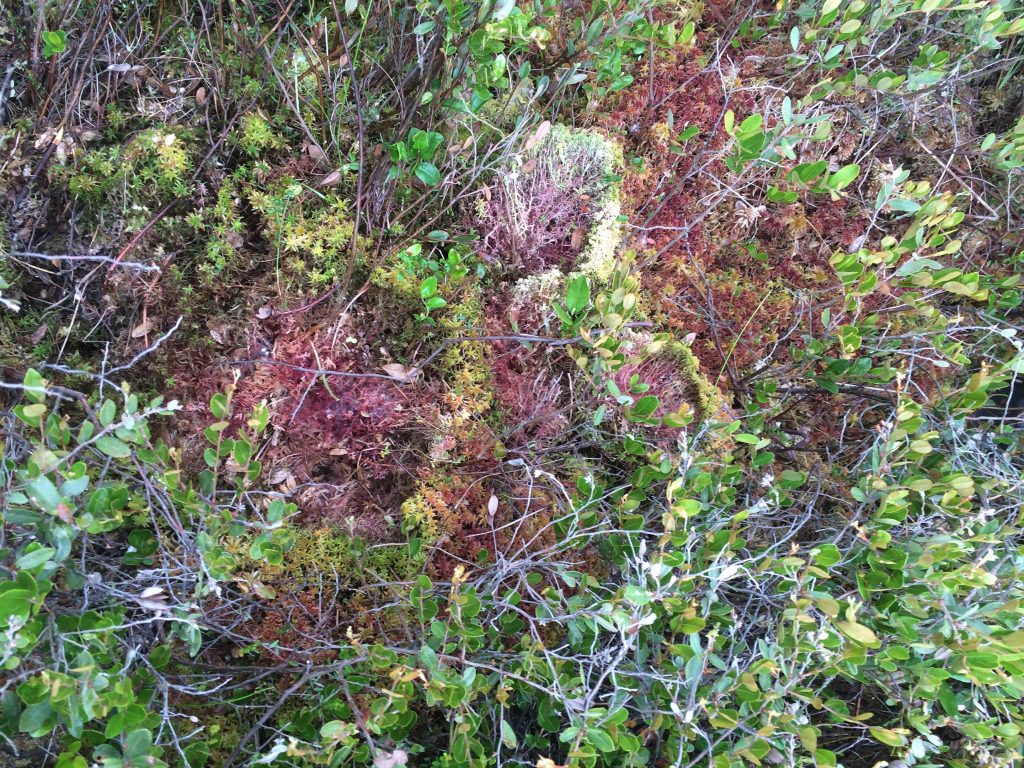 While working as a laboratory manager for seven years in the department of Natural Resources at Cornell, I learned the invaluable experience of mentoring undergraduate students who had the opportunity to conduct research through the Hunter R. Rawlings, III Presidential Scholars Program.  Professor Joseph B. Yavitt guided four different presidential scholars to research the ‘Paleo Litter’ topic in the time I managed the lab.  In this article, I’ll review a resultant paper, “Leaf Litter Fuels Methanogenesis Throughout Decomposition in a Forested Peatland,” (Corteselli et al., 2016).

We examined the leaf litter decomposition rates of fifteen different tree species over four years.  Precisely hand-mapping the project location kept technology out of the field and encouraged a greater appreciation of the unique forested wetland at Labrador Hollow.  Redundantly and inertly labeling the litter bag samples ensured accurate retrieval even after plants and sphagnum attempted to bury the work.  We then discovered more about the greenhouse gases produced by the different tree species because of variations in their internal constituents, i.e. soluble sugars and polysaccharides, pectin, lignin, hemicellulose, and cellulose.  The most CO2 production from the remaining residue occurred for the incubated 164-day old litter, while the most CH4 production occurred for the incubated residue of 338-day old litter.  Only the oldest 940-day old residue exhibited differences in CH4 production rates due to leaf type: angiosperms produced the most CH4, deciduous gymnosperms produced an intermediate amount, and evergreen gymnosperms produced the least.  For CO2 production, leaf type did not have an influence on emissions, yet production decreased with increasing age of litter.  A complex publication requiring the coordination of myself, four undergraduates (two scholars and two lab employees), a graduate student, and the advising professor, the findings were presented on Cornell’s campus at a poster session.

Commentary on the Methods

To introduce team participation, Professor Yavitt supervised the project.  I helped organize the field plots, combining chemical protocols from multiple papers into the digestion procedure in addition to managing and performing lab tasks.  James C. Burtis conducted statistical tests.  The project included two additional students, Kristen MacFarlane, a work-study student in the lab from 2009 to 2013 and Kayla Jacobs, in the lab from 2010 to 2013.

Kristen and I or Liz and I walked from campus to the Cornell Plantations to collect leaf litter for the fifteen tree species that were categorized according to functional group, i.e. deciduous angiosperm, deciduous conifer, and evergreen conifer.

Contrary to the statement in the paper that the litter bags were of equal size, nylon mesh bag size ranged from a 4-inch to a 15-inch square including the 0.5-inch border outside of the impulse sealer seam.  The goal was to ensure a total weight of 10-18-grams in each mesh bag with all the litter bags of all species having the same approximate thickness.  The presence or absence of the rachis of compound leaves into the mesh bags may have contributed to species differences in the results.  Some species such as P. mariana had to be handled carefully due to the size of the needles compared to the mesh size.

Light blue plastic weed trimmer line was woven through the mesh edges to create a line of litter bags.  Species location was randomized along each line from an old printed paper of random numbers.  To ensure proper long-term identification, each line had a code and each species had a code.  Line codes consisted of a series of loops (5) and knots (1) tied in the plastic line to indicate the line number, e.g. 7 = 1 loop + 2 knots.  Each line was secured with a bamboo pole or similar object to note location.  The entire plot was established with a field tape to clarify a central axis from which other locations were measured and mapped by hand.  Old broom sticks or PVC pipes marked the start of each of the five blocks.  Species were further labeled (aside from bag size) with two inert glass beads, e.g. Pinus strobus = two orange cat’s eyes.

Sampling of the 5 x 15 = 75 lines of litter bags were collected via stratified random sampling, e.g. one line from each of the 5 blocks along an environmental gradient.  In the final collection, all lines were still discoverable, even under significant organic matter accumulation and plant growth.  After retrieval from the field, the bags, sometimes moist, sat in the low humidity lab for several days prior to being prepared for subsequent analysis starting with initial weights and percent moisture before incubations.

To conserve laboratory resources, we tested old incubation jars for integrity by overfilling with N2, inverting under water, and agitating to stimulate the jar to leak.  Non-leaking jars were used to collect greenhouse gas emission values via manual injection on the Shimadzu GC-14A.  K. MacFarlane, K. Jacobs, and E. Corteselli all participated in collecting data from analysis on the GC.

To calculate the fractions of different leaf components in the remaining residue, we repeatedly tested the complete leaf digestion protocol when calculating standard curves for eight concentrations each of arabinose, fructose, galactose, galacturonic acid, glucose, maltose, mannose, and xylose.  To perform the sequential digestion (Table 2), I coordinated all four of us – working independently in sequence, not in parallel – to complete reagent addition, centrifugation, desalting, rinsing, and the colorimetric assay. 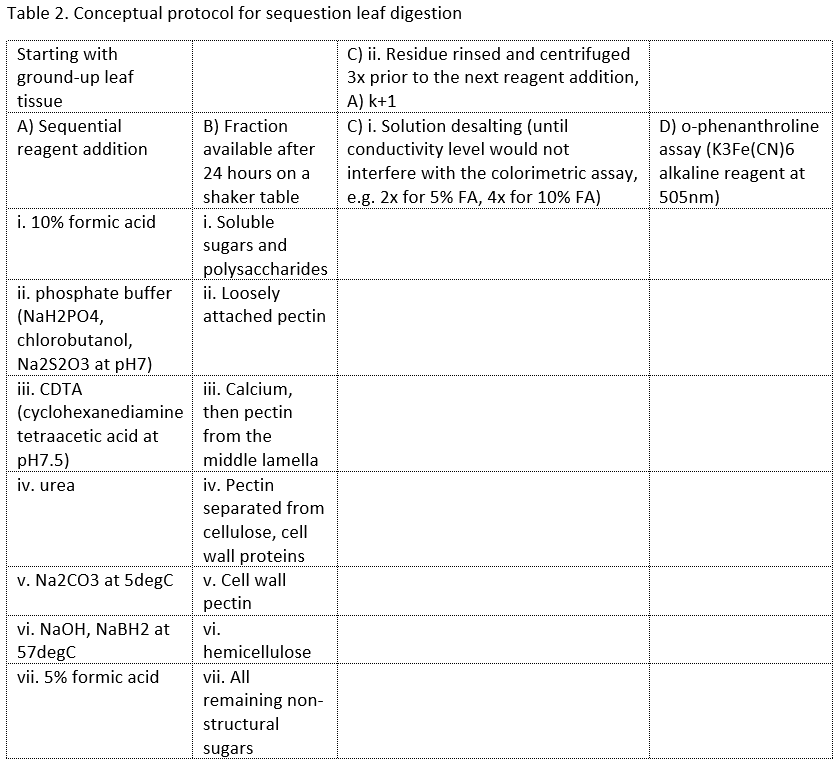 The fractions listed in column B of Table 2 are present in different amounts and configurations depending on the leaf architecture of each species.  Leaf architecture of deciduous compared to coniferous species could have a significant effect on the fractions, decomposition, and resultant greenhouse gas production.

Lignin content was calculated from samples sent to Dairy One.  Summary results were that hemicellulose decays fastest, then cellulose, and lignin decays slower (see Corteselli et al., 2016).  According to the author, CH4 production seems more strongly dependent on structure, i.e. deciduous gymnosperms and angiosperms that have more soluble leaf constituents (smaller lignocellulose to pectin ratios from Corteselli et al., 2016, Figure 1, while evergreen gymnosperms have a higher lignocellulose to pectin ratio and less CH4 production).  Although the author contends that wetland trees have more labile components that would produce CH4, the traits listed in Table 1 do not necessarily reflect that claim.

The lack of CH4 production from the 164-day old residue was also discussed.  Additional reasons could include the influential and/or abundance of fungal communities on decomposition rates of lignin, available N to facilitate fungal activity, amount of sunlight due to percent tree canopy, and the ~6-month first time collection.  To explain, if most collections were in 1-year intervals starting in early winter, the 6-month collection timepoint would have been in the spring when microbial activity – possibly in the peat soil – could be different.

As a last note, pectin seems to be the operable leaf constituent in CH4 production (Table 4 from Corteselli et al., 2016).  Microbial activity influenced by pectin that is available as structural components are successively removed is the basis of the leaf digestion laboratory protocol yet probably does not accurately reflect what occurs in the field.  In situ digestion is likely more complex from multiple simultaneous processes.

Prior to the study’s completion, another Hunter R. Rawlings student, Anna Kryczka started working with Professor Yavitt in 2015 on the same topic before I departed from the lab in 2016 to complete graduate work.  For more than a semester, the chem room in the lab was a geek relay endurance race that produced rewarding teamwork.

From 2009 to 2016, in lieu of an immediate Ph.D., I managed a forest ecology laboratory at Cornell University in the department of Natural Resources for Professors Timothy J. Fahey and Joseph B. Yavitt.  I supervised 32 undergraduate students, a few technicians, and helped visiting international professors and lab visitors.  To improve working conditions in Bradfield Hall, I completed coursework in Environmental Psychology starting in 2014.  In 2016, I left Cornell and accepted an offer from the University of Michigan, where I received two Master’s degrees (M.S. Conservation Ecology and M. Landscape Architecture, 2019).  After graduating, I worked as a landscape coordinator for UM’s Alumni Association, summarizing land management goals in the 2019 Sustainability Plan for Camp Michigania located in Petoskey, Michigan.  Then in March 2020, I founded Anagram ECO, LLC, acting as an ecological and community health advisor for neighborhoods and homeowners, reading the landscape as a field ecologist and offering design advice as a landscape architect who improves health.