On the challenges of life as a graduate student, scientist, and new mom

I was three weeks postpartum when I received the news that my post-doc fellowship had been selected for funding. My immediate feelings were a mixture of relief, excitement, and sheer panic. I was relieved that I had secured my next position and would not be unemployed after defending my PhD. I was excited to move in a direction that would help me obtain more applied skills for my future career. But now that I had a post-doc position, it meant that I also had a defense date. I felt sheer panic at the prospect of finishing my PhD in the following six months while taking care of a newborn baby. Not only that, but I had proposed a project for my post-doc that was completely out of my field of expertise. My previous research was squarely in the field of evolutionary ecology; I had focused on using field experiments to study local adaptation, climate change, and urban ecology. Now I was about to start working in mathematical biology, public health, and public policy. To say that I felt woefully underprepared for everything that was ahead of me in the coming months would be an understatement.

The next six months were a whirlwind of data analysis, writing, and trying to figure out what exactly led to the baby sleeping an extra hour the night before (answer: it was probably just random chance). I took three months of maternity leave and then went back to work. We were fortunate that my husband was able to take three months of leave as well, but a new mother is never off the clock. My days consisted of trying to get some work finished in the 90 minutes between pumping sessions. While I was provided with a separate office to use for pumping, I had to wash the breast pump parts in the kitchen sink of the common area, in full view of my colleagues.

I felt immense guilt that I wasn’t working enough hours or that the work I was completing was of poor quality. At the same time, I felt like I was failing as a new mother. I was tired, overwhelmed, and feeling alone. On more than one occasion, I broke down crying in an administrator’s office over some trivial matter. But I also didn’t want to give up on my PhD or my career as a scientist. I love research, I love learning new things, and I love solving problems. Being a scientist is part of my identity. I remember friends and colleagues telling me that it was okay if I didn’t finish my PhD or that my timeline was too tight or that it was going to be incredibly hard. While these were all true, I just wanted them to tell me that they believed in me and that I could do it.

As the weeks passed, I learned a new normal. I wrote down on a sticky note some advice from a close friend who had also had a baby during the end of her PhD: “It just has to be good enough”. I stuck it on my computer and tried to embody that sentiment every day. I did the best work I could during the day and never worked past 4 pm. I spent my evenings and weekends with my family. I learned that the number of hours worked does not equal quality. I learned that taking a family vacation even when your dissertation is due in two months can actually help your productivity. I learned to lower my standards, which are always much higher than what anyone else expects of me. I learned that I could be a scientist and a mum at the same time. 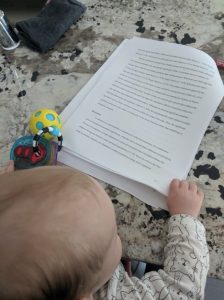 Peer review the night before my PhD defense

I successfully defended my PhD in August 2019, almost exactly six months after my daughter was born. Even now, I’m still surprised I made it. I was able to do it with the support of my family, a few close friends, and an excellent therapist. In hindsight, I can see that as a new working mum and graduate student, I really needed more emotional support: from my colleagues, from my department, from my university. It was also up to me to figure out the maternity leave policy, to ask for a private room for pumping. While one could argue that I should have sought out other sources of support at the university, the reality is that I simply didn’t have the bandwidth. I think most new parents rarely do.

I write this post not to admonish others (except for the lack of paid parental leave in the United States, which I wholeheartedly admonish), but rather to encourage departments and employers to develop at minimum a guidebook with support and resources for new parents, be it undergraduates, graduate students, post-docs, faculty, or staff. I think most working parents would have plenty of thoughts to share, both the good and the bad. I also want to encourage people to check-in with new parents – it may not be obvious that they are struggling. In academia and elsewhere where individual success, independence, and perseverance are so highly valued, it can be difficult to ask for help. Lastly, I share these thoughts in the hope that they might resonate with someone and make them feel less alone. You can do it!

One month after my PhD defense, I started my post-doc. At one of my first meetings, I was asked to introduce myself to a room full of people who worked on science and environmental policy, an area that was completely new to me. I was nervous I wasn’t going to fit in, but I was also excited to delve into a new area of research, start new collaborative projects, and develop new skills. I gave a brief summary of my background and research plans for my post-doc. At the end of my introduction, my advisor piped in and said: “And she had a baby six months ago!”. Oh yeah, that too.

Amanda Gorton is an evolutionary ecologist, interested in the impacts of urbanization on the organisms that inhabit cities, including humans. Some of her ongoing research includes investigating how allergenic plants are distributed across socioeconomic status within urban areas. She enjoys applying her analytical skills to all types of problems, which has led her to work on projects spanning multiple disciplines. Amanda is currently a Grand Challenges in Biology Postdoctoral Fellow at the University of Minnesota.