SciComm Lit Review: Sophia Burke reviews “Don’t Be Such a Scientist: Talking Substance in an Age of Style”

“If you have become frustrated, as I have, with the lack of action and public support of climate change research and proactive policy, this book will be an eye opener.” ~S. Burke 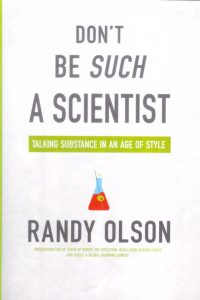 What is the reviewer’s motive and perspective?

I am a fourth year PhD student at the University of New Hampshire studying the effects of climate change on small ponds in the subarctic. My interest in science communication has grown out of my love for my work and my eagerness to help inspire the next generation of scientists. I believe it is imperative that we as scientists fully understand our responsibility to connect with our audience and communicate our work and its importance as clearly as possible.

Who can benefit from reading and referencing this SciComm Lit?

If you have become frustrated, as I have, with the lack of action and public support of climate change research and proactive policy, this book will be an eye opener. Though not necessarily a step-by-step guide to becoming a better communicator, this book will encourage you to stop and think about your own communication style and the styles of those around you. Dr. Olson has an unsympathetic view of scientist-communicators, blaming them (us!) for why the public doesn’t believe more strongly in climate change. He believes that scientists are too cerebral, too caught up in the details and nuances of their science, to communicate their messages effectively to the public.

While I don’t believe that all of the blame lies with us, the scientists, I do think it is important to understand how we can be part of the problem. In an age where people have so many options for entertainment and learning, we need to be able to hold their attention long enough to get our message across.

In many ways, Alan Alda represents an archetype of one type of audience member that people try to reach with their science communications. He is a non-expert. He’s interested in a range of scientific topics from health to psychology to ecology. He is exceptionally curious. If this sounds like one of your regular target audiences, then this book is for you.

Dr. Olson describes effective communication as a balance between being accurate and being boring.

He explains that scientists often lack an easy-to-follow story structure and are too “intellectual”, too focused on facts, facts, FACTS! He argues that, to be most effective, scientists should take advantage of a simple storytelling structure, to “Arouse and Fulfill”. They must introduce the subject in a way that piques the audience’s interest before they bring the facts, otherwise the audience can lose interest. Olson also warns that scientists often get hung up on the details. As a budding professional researcher, I find myself getting stuck on this very point. Not everyone needs to know the intricate details of our field sampling, or how exactly we conducted our lab work. Olson suggests that our public audiences need to know only the most interesting and important parts.

The most thought-provoking part of the book for me was when Olson presented and critiqued each of the Union of Concerned Scientists’ tips for communicating with reporters. His main points are: (1) relax; (2) don’t over-prepare; and (3) trust that if you connect with the interviewer (more on this below) they will steer the conversation towards your main message. This resonated with me because I had experienced a bad interview just a few weeks prior to reading Don’t Be Such a Scientist. I was thrown by the interviewer’s questions, which differed from what I had prepared for. I clammed up and stammered through each question. Needless to say, the clips of me speaking were very short.

Olson suggests that the most important thing a scientist can do during an interview is to connect with the interviewer.

The interviewer can be a great ally in getting the word out about your work. If the interviewer comes away from the experience having learned something and having enjoyed themselves, they might be more likely to frame the interview positively. I raised these points with my professor in a graduate course on science denialism and he suggested that the effectiveness of this strategy (connecting with the interviewer) is dependent on who is interviewing you. While one should try to relax and focus on engaging positively with the interviewer, it is important to remain aware of where the line of questioning is headed. Is the interviewer asking questions that will allow you to convey your message to the audience?

While this book was eye opening in many respects, I must admit feeling frustrated at times with Olson’s criticisms. Olson left academia years before writing this book and has since been working in the entertainment industry. I felt that he spoke of scientists as a group separate from himself, rather than a group he once belonged to and still understands. I think a more constructive way of presenting his argument would have been to use his background in both worlds—to merge his understanding that scientists want to get the facts right with his experience creating content that the public wants to engage with.

Don’t Be Such a Scientist offers new strategies, from an entertainment industry perspective, for engaging effectively with a public audience. Don’t let the book’s tone discourage you from using Olson’s advice to communicate your science.

Olson, R. (2009). Don’t Be Such a Scientist: Talking substance in an Age of Style. Island Press

“You think too much! You mother F@$#%&* think too much!  You’re nothing but an arrogant, pointy-headed intellectual — I want you out of my classroom and off the premises in five minutes or I’m calling the police and having you arrested for trespassing.” — Hollywood acting teacher to Randy Olson, former scientist

Scientists wear ragged clothes, forget to comb their hair, and speak in a language that even they don’t understand. Or so people think. Most scientists don’t care how they are perceived, but in our media-dominated age, style points count.

Enter Randy Olson.  Fifteen years ago, Olson bid farewell to the science world and shipped off to Hollywood ready to change the world. With films like Flock of Dodos: The Evolution-Intelligent Design Circus (Tribeca ’06, Showtime) and Sizzle: A Global Warming Comedy (Outfest ’08), he has tried to bridge the cultural divide that has too often left science on the outside looking in.

Now, in his first book, Olson, with a Harvard Ph.D. and formerly a tenured professor of marine biology at the University of New Hampshire, recounts the lessons from his own hilarious-and at times humiliating-evolution from science professor to Hollywood filmmaker. In Don’t Be Such a Scientist, he shares the secrets of talking substance in an age of style. The key, he argues, is to stay true to the facts while tapping into something more primordial, more irrational, and ultimately more human.

In a book enlivened by a profane acting teacher who made Olson realize that “nobody wants to watch you think,” he offers up serious insights and poignant stories. You’ll laugh, you may cry, and as a communicator you’ll certainly learn the importance of not only knowing how to fulfill, but also how to arouse.