Resource of the Week: “This article won’t change your mind and the facts on why facts alone can’t fight false beliefs” 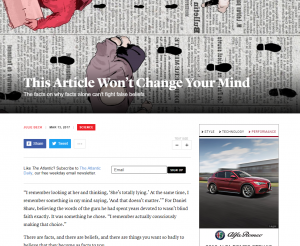 Image: screenshot from the article

Listen to the audio version

This article delves into scientific explanations for the truth in this quotation (in the article):

“A man with a conviction is a hard man to change,” [Leon] Festinger, Henry Riecken, and Stanley Schacter wrote in When Prophecy Fails, their 1957 book about this study. “Tell him you disagree and he turns away. Show him facts or figures and he questions your sources. Appeal to logic and he fails to see your point … Suppose that he is presented with evidence, unequivocal and undeniable evidence, that his belief is wrong: what will happen? The individual will frequently emerge, not only unshaken, but even more convinced of the truth of his beliefs than ever before.”

It’s a long read, but worth the investment.