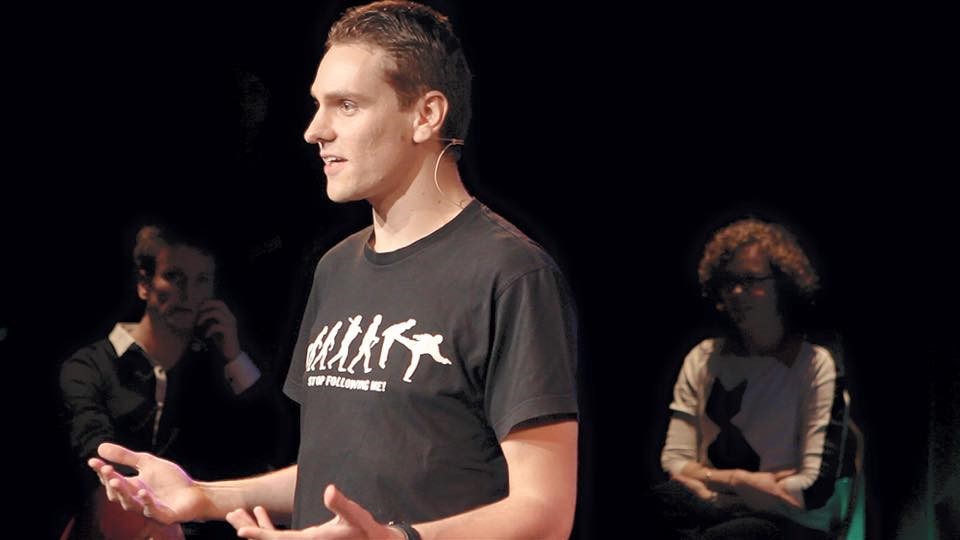 Jente Ottenburghs is a biologist and freelance science writer. He obtained his PhD at the University of Wageningen (the Netherlands) where he studied the genetics of hybridizing geese. During his PhD, Jente discovered his passion for sharing science with a broad audience. Currently, he combines his scientific work (as a postdoc in Sweden) with popular science writing. Connect with Jente @jente_o, through e-mail or on his website.

I can levitate birds. But nobody cares.

But, this is one of my favourite* jokes by the American one-liner comedian Steven Wright. I have long enjoyed watching stand-up comedy and I always wondered how it felt to stand on a stage: just you, a microphone and your jokes. It used to sound pretty scary.

While I was completing my Masters in Biology at Antwerp University (Belgium), I regularly visited the comedy bar The Joker. Apart from gigs by established comedians, they also organized open mic evenings for beginners. Everyone could step on stage and see if they got what it takes. I saw many people giving it a try – some very funny, others no so – and at some point I thought, “I can do that. If the audience laughs, great; if not, at least I tried.”

So, for a couple of weeks, I wrote down all the jokes that came to mind (often during lectures).

I distilled it to a routine of about 5 minutes. I practised several times in my room and finally, I signed up for an open mic evening. Telling your first joke on stage is terrifying. Will anyone laugh? Or will there be utter silence? Maybe some crickets chirping in the background? Luckily, my comedy debut went great. I managed to get a few good laughs, and I actually enjoyed it myself. Later at the bar, one of the audience members approached me. “Here is my card,” he said. “If you want to perform more, just give me a call.” Before I knew it, I was travelling across Belgium entertaining people with my jokes.

Being a stand-up comedian was great. But apart from cracking jokes, I wanted to educate people.

As a newcomer to the comedy scene, you only get ten to fifteen minutes to wow the audience. You are expected to crank out one joke after the other. I wanted to teach people something, bring across a message in between the jokes. As a newbie comedian, I didn’t get the time to do this. Then ScienceBattle came along. At the time, I had finished my Masters in Antwerp and moved to the Netherlands to pursue a PhD at Wageningen University. One day, I received an e-mail from a colleague. Some people were looking for PhD students to perform in a new science-flavoured theatre show. The set-up of this show was straightforward. Four PhD students give a ten-minute talk about their research. At the end of the evening, one participant wins. The winner is determined by a jury chosen from the audience, a special guest and the good-old applause meter. The prize? A jar of brains – presumably from calves – and a wooden plaque with the ScienceBattle logo. I participated numerous times and managed to win the show five times. I now have five brain-filled jars in my apartment. When my girlfriend moves in with me, the jars will have to go. No discussion possible.

In the end, I managed to find a good balance between science and humour.

During my performances, I noticed that people appreciated my humour. My PhD topic – on hybridization between different goose species – certainly lends itself to some jokes. In a sense, I am studying the sex life of these birds. For example, I explain why some geese choose a partner of another species. One reason is that some birds cannot find a mate and become so desperate that they settle for a partner from another species. This is known as the Desperation Hypothesis.

And then there is the duck penis. One of the favourite lines during my performance is accompanied by a photo of that body part: “And now I would like to draw your attention to the tip of this duck penis.” After letting the audience chuckle uncomfortably with this image in front of them, I explain how the duck penis (which has a peculiar corkscrew-like shape) evolved and how it is related to my research. Here, I follow the philosophy of the Ig Nobel Awards, which honour achievements that “first make people laugh and then make them think.” In the end, I managed to find a good balance between science and humour in my talk.

I realized that I am a scientist and a popular science communicator. It’s impossible to be just one or the other.

Apart from performing in the theatre, I was also writing for a Dutch popular science website: Scientias. In agreement with my PhD supervisor, I dedicated Friday mornings to science communication. During the week, I would keep my eyes open for new interesting publications. My main interest is evolutionary biology, and I used recent discoveries to clarify certain evolutionary terms. By explaining complex material in plain language, you get a better understanding of the concepts yourself. Jargon can act as a smokescreen, even for scientists. Translating scientific terms to everyday language can reveal new ways of looking at old problems. For example, in one of my pieces, I explained several techniques on how to build evolutionary trees from genetic data. By guiding the reader step by step through these methods, I also got a better understanding of these mathematically complex models. And of course, I tried to sneak in the occasional joke (often very subtle).

After finishing my PhD, I wondered whether I should pursue a career as a science journalist. So, I contacted several Dutch newspapers. One newspaper – De Volkskrant – offered me an internship at their science department. During the following four months, I wrote about various topics, ranging from falling stars to bike helmets. I learned a lot about writing for a wide audience, such as the build-up of a news article. Start with the main point and introduce the details later on. Quite the opposite from scientific writing. But more importantly, I realized that only writing popular science is too limited for me. I missed diving into a new topic, completely immersing myself and discovering new things. That is why I decided to combine my scientific career (I am now doing a postdoc at Uppsala University in Sweden) with popular science writing.

During working hours, I focus on my research project about the evolution of geese (a continuation of my PhD). I use the evenings and weekends for popular science writing. And the comedy? I don’t do any stand-up at the moment, but my experience on stage has certainly improved my presentation skills. In the end, I don’t think giving a scientific talk should be that different from entertaining people with your best jokes. Both require knowing your stuff, knowing your audience, and effectively bridging the two.

1. Don’t try to be funny, let the jokes come naturally.

Some people notice that a good joke can liven up a boring talk. So, when preparing their presentation, they eagerly try to come up with funny quips or wordplays. Don’t do this. Jokes have to pop up spontaneously. Some of my funniest moments came unexpectedly.

My experience at the Dutch newspaper showed me that I would not be satisfied working as a full-time science journalist. I need to do science. This insight only occurred to me because I worked at the newspaper. So, get out of your comfort zone and just give it a try.

3. Discover your own style.

Everyone has their favourite science writer and it is easy to try to mimic them. For example, I really enjoy reading the essays of evolutionary biologist Stephen Jay Gould, who had a very elaborate, literary style. I don’t. I like to keep things simple, get to the point as quickly (and clearly) as possible. Of course you can learn from other writers, but in the end you should develop your own style.

*Editor’s note: Out of respect for, and celebration of, the myriad ways science is communicated around the world, we use the standardized English of the contributor’s region.